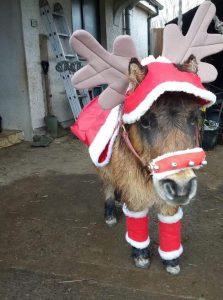 Santa Claus made a surprise appearance at the Sanctuary

ON the home stretch to Christmas, Carole York, visionary behind Westown-based ‘Putting in the Magic’ Pony Sanctuary has been given notice to leave the four-acre property which she has been renting since 2014. The landlord, now living in London, has extended an offer for Carole, a retired Equine Massage Therapist, to buy the property but with all of her money being used to fund the running of the pony sanctuary, this is not a viable option at the moment.

A South African native, Carole has lived in Ireland for 20 years. In 2014, she was made aware of a small Shetland pony who had been abandoned near Ballyscanlon woods. In 2015, she was in a position to take this pony in and, gradually, the sanctuary grew to its present number of 23 ponies. The four acres are used to facilitate paddocks for the ponies and a track for them, along with Carole’s house. “Like people, ponies are anxious. If they have been mistreated, they are always waiting for disaster, always anxious.” Carole sees her sanctuary as being somewhere that ponies in need of one on one care can go, because she does not believe in giving up on them.

Many ponies are rehabilitated by Carole to a degree that they can be rehomed. Other ponies will never be in a position to be rehomed and they remain with Carole. An on-site pony, affectionately named ‘Pamela Anderson’, is a supernanny of sorts and she takes care of the more vulnerable ponies until such time as they can integrate with the other ponies at the sanctuary.

Plans going forward, before the landlord made his intention to sell clear, were to introduce a social enterprise into the sanctuary. While the ponies are here for sanctuary, there will never be a petting zoo plan, but there are plans to look at stress relief and to explore the benefits of human interaction in the form of workshops.

This is a labour of love for Carole and at the end of February, when her rental lease is over, the sanctuary as it stands is at risk. Funds can be donated via the GoFundMe page on https://www.gofundme.com/f/save-the-magic. Carole runs a day to day commentary on the lives of her ponies on the Putting in the Magic facebook page.

Jim McManus and the Elixir of Life