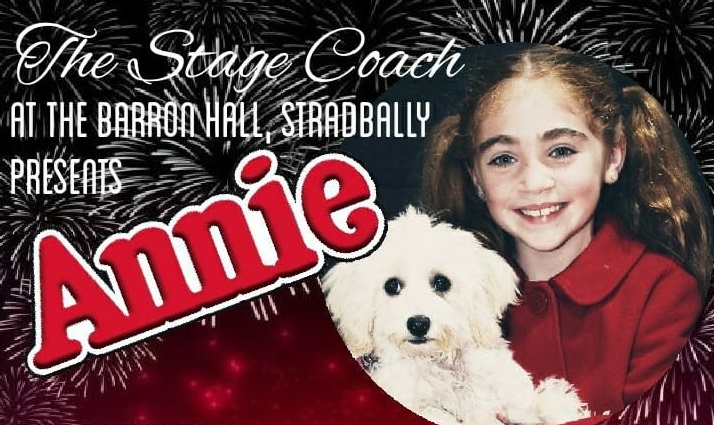 ALL roads led to the Barron Hall recently when the Christmas spirit burst across the small Barron Hall stage as a cast the size of Ben Hur strutted their stuff. Martine Rogers is performing miracles with young actors and singers in the village of Stradbally and a packed hall wasn’t slow to show its appreciation of their young charges. Young? Only five of the cast are over 12 and President Roosevelt, played by the excellent Ronan Cunningham, celebrates his 7th birthday on stage. Nevertheless his performance is spot on. Ronan commands the stage and is word-perfect with excellent diction.

Diction and acting is top-class throughout and I was amazed at the quality of talent on the tiny stage. It was great to see Director Martine Rogers involve every single young actor in the action and there is no doubt that she has a conveyor belt of talent available to her.

Eight-year-old Lucy Power gives a top-drawer performance throughout as the loveable Annie. Lucy wins hearts all afternoon and sings and acts with the ease of a professional. Well, of course, ‘Tomorrow’ is the show-stopper but I love her opening ‘Maybe’ number that she sings with tenderness and sympathy.

‘All roads led to the Barron Hall recently when the Christmas spirit burst across the small Barron Hall stage as a cast the size of Ben Hur strutted their stuff. Martine Rogers is performing miracles with young actors and singers in the village of Stradbally.’

Tom Rogers Jr is superb as the tycoon Daddy Warbucks who seems to put the entire apparatus of the USA Civil Service on hold as he searches for Annie’s parents. Tom is a natural actor with strong presence and holds the story of the show together. His transition from hard-nosed tycoon to loveable father is convincing and moving.

Tom’s sister Polly Rogers is wonderful as the overbearing Ms. Hannigan who has her orphan charges scrubbing floors at 4am. Polly’s Bronx accent is the best I have ever heard and her rapport with Annie and the orphans is the gel that holds the show together.

Bertie Rogers and Hazel Walsh get lots of laughs as the hapless pair of crooks Rooster and Lily; Molly Bradshaw is excellent as the Warbuck’s secretary Grace and Arthur Rogers doubles up roles as the cop and Bert Healy.

The cast is well drilled and lines and accents are top-drawer. ‘Hard Knock Life’ is everything you want it to be: thumpy, energetic, angry and brash and – despite everything the life flings at these young orphans – still full of hope and confidence. The orphans, played by Quinn Donnelly, Kara Kiely and Siún Jones, Alannah Power, Emma-Louise Cleary, Ella Crowley and Ally Walsh, give it socks all afternoon and are full of confidence. Warbuck’s servants are stiff and pompous as you would expect and Roosevelt’s cabinet would give Trump’s more than a run for his dosh.

The comedy gets all the laughs and the knockabout slapstick certainly appeals to the young audience who all adore their siblings and pals on the Stradbally stage. And no one has any difficulty in following the storyline because the story is well told by the young cast. A great afternoon in the Barron Hall, Stradbally for all the audience.