“I CAN’T play the spoons now on account of the arthritis,” says Michael Ryan, holding out his left hand as one of the kitchen staff turns on the radio at Lady Lane House.

The strains of ‘Besame Mucho’ waft across the dining room area as the Ballytruckle native’s thoughts drift towards Christmas. Minutes later, ‘Guantanemera’ is joyously drifting out of the same speakers. It may be drizzling outside, but those two songs made things feel unexpectedly Cuban as I sat in the delightfully decorated eating and recreation area.

“We’ll have a great bit of fun in here between now and Christmas Day, between the singing, the music and the company,” said Michael, who will turn 72 next April. “And sure the company in here is great. I’d be a bit lost without it, being honest.”

A resident of Laburnam Villas, a smiling Michael assures me that he’s “known all over the town”. “Sure why wouldn’t I be? Joe (Evans) is after taking my photograph a few times at this stage – and didn’t he get one of me down the road here when the Christmas lights were turned on?” So he did, as this page suitably demonstrates!

“I’ve two brothers: Tony died a few years ago and Noel is still alive, thank God, so is my sister Eileen. Noel was, and still is, a great musician. He played with Brendan Bowyer, he did two years in Vegas with Brendan and played with The Miami Showband too. He’s a doctor now.”

Music was a daily staple in the Ryan household, according to Michael. “Yeah, we always had music growing up. My father Tommy played the fiddle and the piano, Eileen played the fiddle too and Noel of course put the music to good use with Brendan Bowyer and all the bands he played with.” And what about himself? “Me? Oh, I got as far as playing the spoons. I was on Suirside Radio years ago – Eddie Coady had me on. I just picked up the spoons one day and off I went, but I can’t do it anymore. I just love my music. We’d have had a few singsongs in our house too but it was mostly all music. It’s a lovely thing to be into.”

Music also played a part in a seasonal job Michael revelled in for almost two decades, working in the kitchens at Mosney Holiday Camp.

“I spent three months every summer for 19 years working in Mosney, and I just loved my time there – I was young when I went there, you’re talking about the early 60s – and I worked in the Ard Rí (for two to three years) and The Marina Hotel too, kitchen work in all of them. I used to end up entertaining the guests up there myself, singing for them and playing the auld spoons! I loved working there; they were long days but twas the kind of job that you were serving people – three or four sittings a day – and meeting people who were naturally in good form on account of being on holiday. I got to know a whole load of people up there and some of the entertainers too like Paddy Cole – and my brother played with Paddy for a while too. Paddy is a lovely man, a real gentleman. The summers up there were very enjoyable. The time used to fly. It was great craic.”

His father Tommy was a foreman in John Hearne’s on The Quay, said Michael. “Twas a good place to work and my father was a good worker. My brother was a carpenter with him there as well; I was there for a while myself, learning to become a carpenter, but it just wasn’t for me so when I went onto other work, but I always worked, I always kept myself busy and I worked for as long as I could. The days in the kitchen could be long but it was a handier kind of work than some of the other things I could have ended up doing.”

Michael told me: “My very first job – and I was only a young fella at the time – was over in Bobby Greer’s (on Michael Street). A friend of mine and myself ended up tossing a coin for the job and I won the toss, and I worked in the oven room there for a while. Then I did a bit of work for David Cunningham across the road in the Fresh Food Hall, cleaning the yard. Then I worked in a couple of factories and in the Foundry for a while; I worked in Raytex too so I ended up in quite a few different places alright. I never stopped working and bar Mosney all the rest of my work was in Waterford. And I suppose working in so many places around the town is how people got to know me. And sure I’m forever on the paper!”

Michael actively followed the fortunes of Waterford FC during the 1970s and into the 80s, including the Blues’ last FAI Cup win in 1980, when they defeated St Patrick’s Athletic at Dalymount Park.

“We’d great days out in Kilcohan and when they won the cup, I stayed with them in the hotel. They were a great team with the likes of Peter Thomas in goal, Al Finucane and so on. And I did a lot of travelling around after the team, up as far as Ballybofey and Dundalk to watch them play. Those were great days.”

Michael lived with his mother Dolly in Ballytruckle until she died almost 11 years ago. “I’ve been living on my own since then. Now she’d have been in and out of respite for a while so I’d have been on my own a bit in the house before she died so I did get used to being on my own. Of course I missed her, you never stop missing your mother and father, but I just had to keep going the whole time. That’s what you have to do, don’t you?”

Michael has been attending Lady Lane House for almost three years, and he clearly enjoys both the setting and the people.

“A few people mentioned about coming in here to me so I thought I’d give it a go,” he said. “You’ve company here the whole time and it’s great. I’ll go down below to Eamonn, Eddie and a few more of the lads there now (pointing to his left) in a few minutes and we’ll have a great chat over dinner; I sit with the same fellas all the time. Coming in here has kept me going. I’m out most days although I don’t go out in the nights the way I used to, but coming in here shortens the day no end. I’ve had arthritis and (Type 1) diabetes for a good few years, I need the trolley (roller) nowadays but I get around all the time. Life is after getting a bit harder for me but you know, I’ve just done my best to just get on with things.”

And what of his Festive Season plans? “I’m looking forward to it alright. I’ll go to the brother on Christmas Day, then I’ll go to the sister on St Stephen’s Day; some of my nieces and nephews will be home and I’ll see all the family together.” 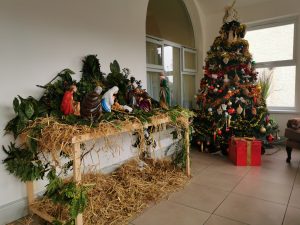 The Christmas Crib and Tree at Lady Lane House.