Council hopeful that ‘flaking’ Catherine Street facade will be remedied

THE rejuvenation of Catherine Street, through the restoration of several Georgian houses and the new Courthouse extension and plaza, has been one of the city’s subtler success stories of recent years.

The sensitive revamp of The Car Stand (Martin Barrett Motors) and the opening of new businesses along the street, including the ‘Under The Clock’ coffee shop, has served to exacerbate the increasing dilapidation of Number 9, Catherine Street.

A predominantly three-storey protected structure dating from the early 19th Century, which also features a two-storey section, the façade’s peeling paintwork has become an unwelcome eyesore in the face of the many welcome improvements made within its environs.

Speaking to the Waterford News & Star, City & County Council Conservation Officer Rosemary Ryall stated: “We are working on that with the owners at present. We’re desperate to see that house brought back into a presentable appearance and, ideally also brought back to practical use. That’s the last of the buildings left there that hasn’t been renovated or improved so to see those works carried out would be very welcome.”

Ms Ryall, who previously undertook a study of Catherine Street, stated: “There are a couple of buildings of national importance there and there’s such a variety of buildings, all with a great sense of character. The ironwork on the street there and many of the doors along it indicate just how wealthy a street it was in an earlier period, which you can also ascertain given the size of so many of its houses.”

Regarding works conducted on another period house on Catherine Street which had been previously used for bedsits (“and it was really dark”), Ms Ryan said: “There was a really fantastic job done on a three-storey house, which stands over a basement, and it’s a project which has had such a positive impact on the entire street. Those responsible for the works did a really tasteful job; they retained the (original) windows which took a bit of work but it’s great that that was achieved as those windows are part of the character of the building and they let in a lot of light – and there are shutters behind some of those windows.”

Rosemary Ryall continued: “There are things you can do for energy conservation without taking out windows and putting in pvc because from an economic standpoint and also from an environmental perspective, pvc windows have a short lifespan, you’re changing them every 20 to 25 years so that generates a lot of waste. And the thought of a host of pvc windows in properties in Catherine Street would greatly diminish the street’s character. Similarly sensitive jobs have been undertaken on houses along O’Connell Street and it’s great to see people moving back into the city.”

Ms Ryall concluded: “Buildings, by their very nature, will change over time. But it behoves us to make sure that the changes we make don’t take away from the house’s character as ultimately, we’re talking about buildings of worth which one generation passes on to the next.” 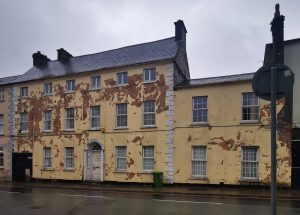 Number 9, Catherine Street, a protected (and currently unoccupied) structure which dates from the early 19th Century, has become a scar on an otherwise vastly improved streetscape. 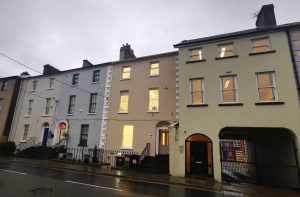 The increased dilapidation of Number 9 is in stark contrast to the superb restorative works carried out on nearby properties on Catherine Street.