Portlaw will be a lesser place without ‘Blackie’

BLACKIE. If you were born in Portlaw over the past half century, then at the very least you or someone you shared an address with had an awareness of Michael ‘Blackie’ (or ‘Blacken’) Keane, who died on December 14.

Blackie was one of an increasingly rare breed from his native place: a bona fide character who had a greeting for everybody and never put in or out on anyone whose path he crossed.

Throughout his adult life, Blackie wove himself into Portlaw’s social fabric to such an extent that his passing was marked with a genuine sadness among practically anyone with a connection to the village. And when Blackie’s lifelong friend, Mikey ‘Tuller’ O’Sullivan sang ‘From A Jack To A King’ at Blackie’s graveside following Requiem Mass on Tuesday last, a litany of happy nights and stories were poignantly triggered among his many friends.

Parish Priest Richard O’Halloran truly spoke for every son and daughter of Portlaw when speaking of Blackie’s life during a wonderfully considered homily at Saint Patrick’s Church.

“Blackie was one of our best known characters and like all such people, important to our place and to our community.”

Fr O’Halloran spoke of Michael being the third of five children born to his parents Walter and Mary. He grew up in George’s Street. While his parents are long departed, Michael was surrounded always by his sisters and brothers, especially Jody, and he also had nieces and a nephew.

“Michael was a friend to many and known to us all. Was there anyone who didn’t know him? And not only was he known but he also was well liked,” said Fr O’Halloran.

In recent times Blackie spent much time with his friends down at Clodiagh House at the allotments and there are many wonderful photographs of him at Clodiagh House, smiling in every one of them, a smile seen even through his illness, he continued.

“I’m sure there was plenty of fun had down there (at the allotment).”

“Blackie, as we know, did not put in or out on anyone. And if you gave him a salute you always got a wave back. If you stopped to have a chat, he would have a word or two for you. And he would do all those things, even though there was a shyness to the man,” Fr O’Halloran said.

“And even in those first difficult weeks that he spent in hospital when he could not speak, I know and many others who visited him would know, that though he couldn’t talk, you would always get the thumbs up instead of hello. Mind you, I got a thumbs down when I asked him who shaved off the beard. He wasn’t happy about that!”

Blackie Keane would never have claimed to be perfect, said Fr O’Halloran, “and yet despite whatever weaknesses he may have had, we only ever saw and we only ever acknowledged the good that was in him. He had a harmless nature and he had a very gentle presence.”

“He did so much us for us in different ways and we’ll probably only really realise it now that he is gone from us. However, maybe to finish, I think we are all agreed on the one fact: that Blackie Keane was one of our own. He was important to his family and he was important to our community and Portlaw will not be the same without him. He most certainly will be missed, so let Blackie and all of the faithful departed, may they rest in peace.”

Michael Keane’s Requiem Mass was co-concelebrated by Father Liam O’Callaghan, with hymns provided by the Portlaw Parish Choir. The readings were delivered by Cleona O’Shea and Bernie Crotty.

Charles Darwin said that “a man’s friendships are one of the best measures of his worth”. By that metric, Blackie left this life among the wealthiest of us. 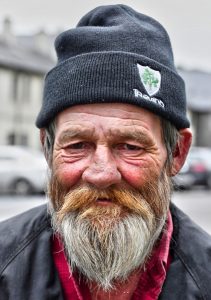