A 400-metre extension of Belview Quay, which would deliver two new berths at the Port of Waterford, would require six hectares (15 acres) of land reclamation and capital dredging, coming with a budget approaching €27 million.

According to the Port’s Masterplan, which runs to 2044, the berths “would be designed with the potential to accommodate future vessels with operating draughts up to 11.0m capable of lying alongside the berths and all states of the tide.

“In practice vessel size would be limited in future by length in terms of turning and manoeuvring at the berths and available navigation widths and depths in the marine approach channel.”

The previous wharf extension in the 2007/08 period, which was constructed at a cost of €10.2m, provided a 193-metre extension at Belview. The Masterplan notes: “There is no site investigation data available for the area downstream of the existing bulk terminal. However, it seems likely that the average length of the piles required may be longer than those supporting the existing wharf. A site investigation would be required to determine this.”

The potential budget for a 400-metre extension, estimated at €26.7m (excluding dredging costs) breaks down as follows:

* Add for additional protection to steel piles and reinforcement: €1m

According to the Masterplan: “This extension would only be built if the demand is foreseen to deliver the additional tonnages and revenue streams that will allow the business to grow and provide returns as forecast i.e. provide a modest but reasonable return on capital expended.”

O’Brien’s Quay has also been proposed, according to the Masterplan.

“Extensions on either side of the existing quay have been considered. The turning circle in the vicinity of this Quay would be required to be enlarged to allow longer ships to turn, which would require deepening and maintenance dredging… The costs of construction of a quay extension at the privately owned O’Brien Quay would be met directly by the owner. The costs of any dredging required would be met by the Port of Waterford.” 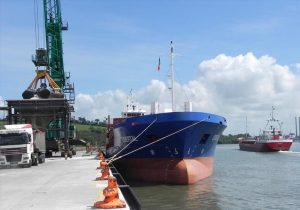