WATERFORD City and County Council are planning to construct a Pedestrian crossing and related traffic calming measures on Barrack Street adjacent to the junction with Mount Sion Avenue, in the area in front of the SPAR shop and Doyle’s Bar, on foot of multiple representations by councillors on behalf of residents of the area.

Speaking at the December Metropolitan Meeting, Director of Services of Roads, Water & Environment, Fergus Galvin said that they chose that particular area because with the shops etc there it is a particular focus point for pedestrian activity.

The proposed works include the construction of build outs on the two corners of Mount Sion Avenue, a new build-out in front of the shop and the Pub and a pedestrian refuge area. As part of these works, road markings will be altered to provide for the tapers for the new refuge island.

According to Mr Galvin, the implementation of the traffic calming scheme with the Pedestrian Crossing will create a “safe environment for all road users with a strong emphasis on non-motorized road users.”

“The main goal is to reduce vehicular speed and improve the facilities for vulnerable road users,” Mr Galvin said. “Unfortunately we would expect to lose two car-parking spaces on either side of the road.”

Speaking at the December meeting, Independent Councillor Joe Kelly said that he was “glad to see” the crossing finally reaching a public consultation stage.

“This has been badly needed,” Cllr Kelly said. “The residents in the area around Barrack Street, Doyle Street etc – many of whom are elderly, have long been saying that this was needed. Do we definitely have the finance in place to commence construction as shown (in the image above)?”

Responding, Fergus Galvin said that there was no issue with funding as the job itself “wasn’t overly expensive”.

Green Party Councillor Marc Ó Cathasaigh said sarcastically that the executive would be “shocked and amazed” to hear that his issue was related to cycling.

“The width of the carriageway is slightly compromised so are we in danger of creating a pinch point for cyclists?” Cllr O Cathasaigh asked. “Can this be retrofitted in the future for a segregated cycle lane?”

Fine Gael Councillor John Cummins added that the Green Party representative might “also be surprised” to hear that he too wanted to mention cycling.

“Similar build outs on the Cork Road by Morris’s made cycling somewhat of a hazard, is there going to be a similar situation on Barrack Street?” Cllr Cummins asked.

Mr Galvin said that a provision for a “cycle lane” can be made and that the plan itself would succeed in “calming traffic” at the location, “which by itself makes it safer for cyclists and other road users”.

Independent Councillor Donal Barry, who used to live in the area added that he had “no problem losing some of those car park spaces” because the way in which they used to reverse into traffic was “lethal”.

Fianna Fáil Councillor Jason Murphy pointed out that cars coming down Mount Sion Avenue and turning left might be hindered by the fact that the new build was very close to the pedestrian crossing and might make sense if they moved it a little further down the road (in the Bunkers Hill direction).

Fergus Galvin said that the “radius of the turn” would be designed in such a way that it would slow traffic down and there would also be new ‘Stop’ signs and road lining at the location. He said that he “wouldn’t be overly concerned”. He added that moving it down the street further might be problematic because of the fact that people are always inclined to cross the street at the most convenient point, i.e. opposite the shops, so there was a fear that the crossing would be ignored if moved elsewhere.

The plan will be sent for public consultation on January before coming back to Councillors for a vote in February. 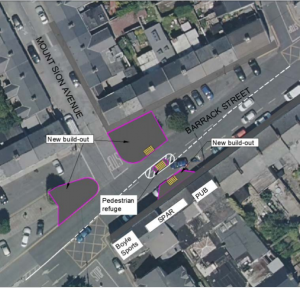 The design proposal for the new pedestrian crossing and traffic calming measures at Barrack Street.