Illegal parking in the Apple Market

SPEAKING at December’s Metropolitan Meeting, Labour’s Cllr Seamus Ryan raised the issue of the ongoing illegal parking in the Apple Market, which local residents had made him aware of. Speaking on behalf of Waterford City & County Council, Director of Services of Roads, Water & Environment Fergus Galvin said that they have asked their traffic wardens to keep an eye on it, and it would be patrolled on an on-going basis.

RESPONDING to Cllr Eddie Mulligan’s query about a weekly parking ticket at the Waterside Car-Park, Waterford City & County Council, Director of Services of Roads, Water & Environment Fergus Galvin said that they have “progressed it” and would be hoping to implement it on a pilot basis in the middle of January, once their amendments to the software system were made on the system.

SPEAKING at the December Metropolitan Meeting, Director of Services Fergus Galvin said that the Council would be introducing a revised Traffic Management Plan at the January meeting to reflect the changes being made to Browne’s Lane, proposed changes to Mayor’s Walk and “one or two other related issues”. With regard to Arundel Square’s traffic situation, Mr Galvin said there may well be changes made in relation to the bus stop and some other minor issues in the future.

A DRAFT Conservation Management Plan for the Woodstown Viking Site has been completed and will be issued for public consultation in January. The Plan incorporates a strategy for future research on the site, a public engagement and heritage animation strategy and practical management plan. Funding was provided by The Heritage Council for development of the Plan.

RESEARCH has been completed on the War of Independence database detailing events that took place in Waterford between January 1919-June 1922. The database was compiled by historian Niall Murray and details over 70 incidents that took place across the city and county. The database will be mapped on GIS and published as a Story Map in 2020. Additionally, a conference is being planned for February 22 in the Large Room of City Hall to commemorate the contribution of Richard Mulcahy in Irish Military History and politics. Richard was born in 70 Manor Street. The planned speakers include John Bruton, David McCullagh, Anne Dolan, Pat McCarthy, Pat Taaffe, Kate Manning and Jim Ryan.

‘Dangerous’ road markings on the Manor

AT December’s Metropolitan Council Meeting, independent Councillor Donal Barry sought an update on the road markings at the Poleberry Link Road/Manor, beside Madigan’s Off Licence where he says he’s seen two serious accidents there in the “last few days”. Sadly, as is often the case in Metropolitan meetings, his question wasn’t answered. 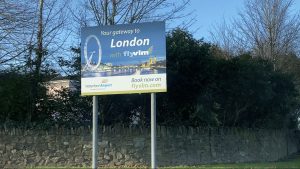 Out of date signage for Waterford Airport.

Out of date signage

AT the December meeting of the Metropolitan Council, Fianna Fáil Councillor Jason Murphy raise the issue of out of date signage around the city. “There’s one particularly bad example of this, at the roundabout opposite University Hospital,” Cllr Murphy said. “It’s a sign for VLM flying to London from Waterford Airport. I think the actual airline is now defunct and it’s a long time since any airline flew in or out of our airport so can we look at that?”

Fergus Galvin said that he thought that all of the signage had been removed “at this stage” but conceded that the one mentioned by Cllr Murphy was being used to advertise Red Iron over the last couple of months so that may have been why it was overlooked.

VLM withdrew services from Waterford Airport in June of 2016.