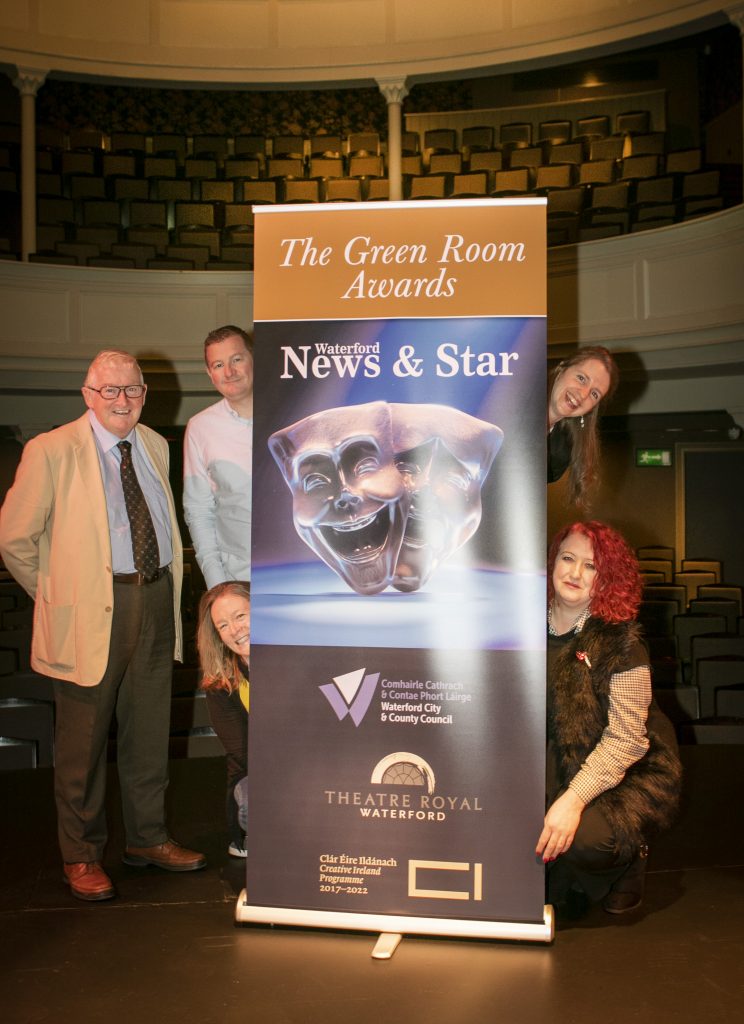 Celebrating arts and theatre across Waterford city and county

PAT McEvoy, arts correspondent with the Waterford News & Star, has been taking his seat in theatres and auditoriums across Waterford, critiquing and supporting the work of the Déise’s amateur and professional performers. This February, the Waterford News & Star takes Pat’s annual Green Room Awards from the page to the stage during a special inaugural night.

This event, which takes place in the Theatre Royal at 8pm on Sunday, February 2, will feature a spectacular variety show by the crème de la crème of Waterford talent as we honour those who make it not just alright on the night but send us home with soaring hearts and memories to treasure.

Nominees for the Green Room Awards are revealed in both this week’s printed edition of the Waterford News & Star and next week’s edition.

The Green Room Awards 2020 celebrate the diversity, scale and quality of Waterford’s theatre and arts scene – professional and amateur. The awards encompass musicals, drama, comedy, choral, panto and much more, and all the roles therein.

They are as much about community as they are about the arts, reflecting how deeply embedded amateur theatre and performance is in Waterford.

There will be over 30 awards covering hundreds of performances and roles, with upwards of 140 nominees – including entire drama and musical theatre companies, and large scale performances.

Pat McEvoy has reviewed more than 100 shows and events, with these performances seen by thousands of Waterford people who have packed out the Theatre Royal, Garter Lane Theatre, Central Arts Theatre, and theatres in Dungarvan, Carrick-on-Suir, and beyond.

We will also be introducing an adjudicated Lifetime Achievement Award and a Popular Vote award, chosen by the public from an adjudicated Waterford Theatre and Entertainment Groups shortlist. Our adjudicators are drawn from representatives of Waterford theatre and arts and Waterford media personnel with in depth knowledge of the vibrant Waterford arts and culture scene in our city and county.

The objective of the Waterford News & Star Green Room Awards Bursary is to support individuals in their endeavours in Arts and Theatre. The bursary is available to people at any stage of their career to develop their practice. It emphasises the value and benefit to a person’s development derived from an extended process of engagement with their practice, and seeks to provide the successful candidate with the time and resources to think, research, reflect and engage with their practice. The bursary will be given to someone who might not otherwise have the funds to achieve his or her potential.

The bursary award is open to people with an involvement in the arts and/or theatre at any stage in their career. To be eligible to apply, applicants must be: A person from, or living in, Waterford City or County, or having an association with Waterford, to develop his or her creative talent; and applying with a view to further developing or kick-starting their career in the field of the Arts and Theatre.

Each application will be judged by an adjudication panel. The recipient will be publicly announced and presented with the bursary at the Waterford News & Star Green Room Awards 2020, in the Theatre Royal on February 2.

In order to apply, download the application form and bursary guidelines and terms and conditions from the webpage https://waterford-news.ie/waterfordnewsandstargreenroomawards/, and send the completed application form, together with your CV, to the Waterford News & Star. The closing date for applications is Friday, January 24, 2020 at 5pm.

Waterford City & County Council, as part of the Creative Ireland 2017-2022 programme, are supporting the Green Room Awards as a way of celebrating the theatre, arts and culture in Waterford city and county and highlighting the quality and diversity of talent in our city and county.

The Theatre Royal is also delighted to be part of the inaugural News & Star Green Room Awards. Located in the heart of the Viking Triangle, the Theatre Royal is the premier venue in the South East region and plays a key role in the cultural life of Waterford City and County. The theatre works to contribute to the advancement of arts and arts education through the promotion and encouragement of cultural and artistic activities. Through its programme of activities the theatre supports the creation and presentation of the arts across a range of artforms and arts practices. Theatre Royal strives to be at the heart of its community. It stirs emotions, entertains, enlightens and informs its wide reaching audience and is recognised for supporting and nurturing community theatre, those involved in amateur theatre and fosters a love of theatre for young people.

Thin Gin, multi award-winning gin from a Waterford Company; a true Déise Spirit! Thin Gin is delighted to support the arts in Waterford.