THE skies were sunken and grey over Maurice Lenihan’s beloved Newtown on Sunday morning while the air was thick with grief as a respected community man was laid to rest.

Cars lined either side of the road running through the village as a stunned locality came to bid farewell to Mr Lenihan, who died following an accident at his crash repair business on Thursday morning last.

In her eulogy, Mr Lenihan’s daughter Emer thanked all who had sympathised with her family, in addition to those who had assisted in the arrangements for the Obsequies.

“‘Let me know when you’re coming home next and I’ll have a car for you’. That was the last thing Dad said to me when we said goodbye this time last weekend,” she told mourners.

“He will have said variants of this kind of favour about a car or something else umpteen times to so many of us here today. He would never see anyone stuck. He was the most generous and loving man to me and my mother. He was a beloved son to May and Jim, brother to Tessie and Margaret, nephew and friend.”

She continued: “Maurice loved Waterford and every inch of Newtown and that became increasingly so as he got older. Newtown looks small to passers-by but Maurice and Newtown formed a network of people and places. You all know who you are. I certainly won’t be able to list every single thing that he was involved with because there are just so many: running our home, garage, pub and the scrapyard was more than enough. On top of that, he had great aspirations for the development of the Tidy Towns Committee, the School and the Church. We truly hope this can all continue and that the legacy of his work will not fade.”

Emer Lenihan continued: “He questioned me recently about when I would be finished up with study and then I asked him back when he’d be finished up working so hard. And then there was some sort of quiet acceptance between us that we both must enjoy working. I wished daily that he would take it easier but Maurice didn’t really do easy. There weren’t enough days in the year or years in his life for him to start and finish all of the ideas that he had. I will never stop being proud of all that he could do and all that he passed on to me and to us all.”

Mr Lenihan’s nephew James Lovatt also made a touching tribute, recalling holiday time spent in Newtown, during which he learned to drive, fish, tend to cattle and the many other tasks his uncle turned a hand to.

“I learned so much from Maurice. As my Uncle and Godfather, I looked up to him and always sought his approval. I remember once being delighted when Emer said that I smelled like him, after spending the day covered in diesel and oil… Maurice could turn his hand to anything. While a trained fitter, it wouldn’t be amiss to label him as an engineer, inventor, electrician, carpenter, entrepreneur, community organiser, the list goes on… We all loved Maurice dearly. The thought of not seeing him again is incomprehensible. He was so integral to all our lives. We will miss him terribly.”

Kevin Walsh and Cllr John O’Leary delivered the readings, a hat and a selection of tools were presented by Donal Dunne and Aisling Elliott as symbols of Mr Lenihan’s working life, while music was provided by Louise Jones.

In his homily, Fr Keogh told mourners: “People are shocked and devastated and it’s not an over-exaggeration to use that word… the community was very important to him, in all aspects of it, in terms of how well the place looked, being there, offering his time and energy to different causes. Many people have their own stories about Maurice’s kindness and generosity, including myself… he will be remembered with great affection and Geraldine and Emer know how highly Maurice was thought of. First and foremost, above all things, despite the business, despite his work and despite his involvement with the community, he was a family man. Maurice loved his family.”

A Health and Safety Authority (HSA) investigation into Mr Lenihan’s death got underway on Friday last.

Maurice Lenihan is survived by his wife Geraldine, daughter Emer, sisters Margaret and Tessie, nephew James, niece Susan, his uncle Mick, his sisters and brother-in-law, his grandnephews, neighbours and friends. May he Rest In Peace. 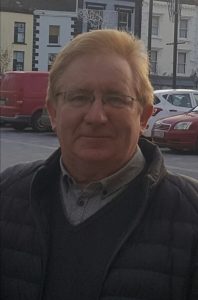 The late Maurice Lenihan, whose Requiem Mass was celebrated on Sunday morning last in Newtown. Photo: With thanks to the Lenehan Family