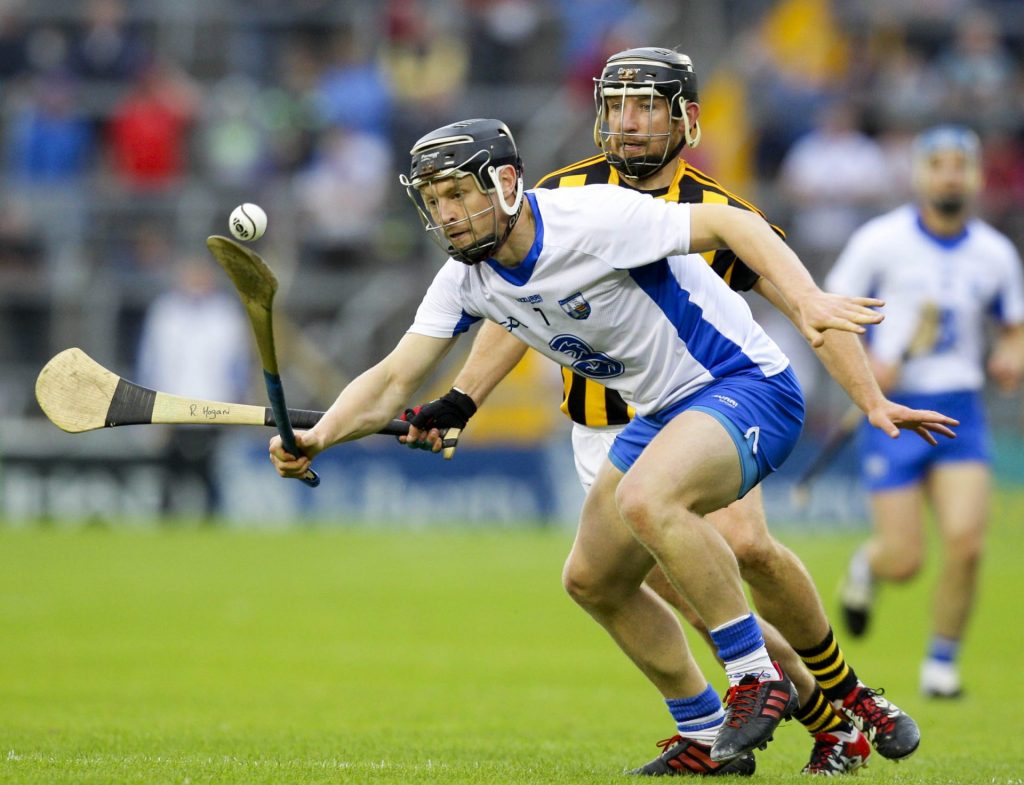 Philip Mahony getting away from Kilkenny’s Richie Hogan during their All-Ireland SHC Semi-Final Replay in Thurles in 2016. The Ballygunner man announced his retirement from inter-county hurling last weekend. Photo: INPHO/Ken Sutton.

Ballygunner great Fergal Hartley fears that Philip Mahony’s retirement from inter-county hurling will leave Liam Cahill short on leaders for 2020.
“I’ve been involved in a lot of dressing rooms over the last 30 years and I’d say without exception that I’ve not been involved with a better leader than Philip Mahony,” the former Déise captain told WLR’s On The Ball show.
“He brings a security, a leadership, a structure to teams that maybe is not seen as much. You would have to know the player well. I remember in 2018, he was sick, and it was an absolutely horrible day when we played Abbeyside. Philip shouldn’t have played the game and was probably man of the match. Nobody at the game knew he was sick but the players in the dressing room did and that’s the respect he generates. People know what he is capable of doing even in a game he shouldn’t play in. On-field leadership and off-field leadership, you simply cannot win without and Philip Mahony is unique in that regard.”
It means that seven of the twenty players that featured in the 2017 All Ireland final against Galway will be marked absent for the start of the league campaign. “With the Brick gone, Philip Mahony gone, Tadhg de Burca out for a period of time with injury and Noel Connors, some of the senior leaders in the team are gone. It’s an opportunity for other players for sure but I firmly believe that without leadership in a team, you will struggle. That will pose a problem for Liam Cahill because I think Philip Mahony is exactly the type of player that Liam Cahill wants; he ticks all the boxes in terms of a guy that gives a hundred per cent on and off the pitch. There’s three or four key leaders going to be absent from the team. It’s a challenge that Liam Cahill is going to face to bring new leaders on.”

MUNSTER CHAMPION
A year after winning a Munster minor medal, he was part of the 2010 senior panel that claimed provincial honours after a replay with Cork. Davy Fitzgerald handed Mahony his first start the following February at home to Dublin. Mahony hurled in 23 championship games after making his debut in the 2012 Munster semi final against Clare under Michael Ryan. During Derek McGrath’s tenure, he added a National League in 2015, started the 2017 All-Ireland final and was nominated for an All Star on three occasions (2015, 2016 and 2017).
In Hartley’s view, a punishing club and inter county schedule ultimately took its toll on the 28 year old. “He has a lot of miles on the clock in the sense of in the last six years with Ballygunner there’s been a run right through to late into the year going straight from club to county and back again. A lot of miles on the clock and a lot of damage to the body. He’s the kind of player that can only do it one way: a hundred per cent in or not and I think he felt it was just a bridge too far this year.”
He was an expert at digging a ball out of a ruck and offloading to a colleague with an overhead hand pass. Hartley regarded him as a selfless player who often shutout a marquee opposition attacker. “In the All Ireland final of 2017, Joe Canning got his second score after 22 minutes. From there until the end of the All Ireland, he got the ball once thereafter. Philip was marking him and that’s the kind of job that he does. Whereas Philip may not have been on the ball that much himself, he took one of the best hurlers in the country out of that game from the end of the first quarter. That’s the kind of job that Philip Mahony does for you that sometimes doesn’t get noticed.”