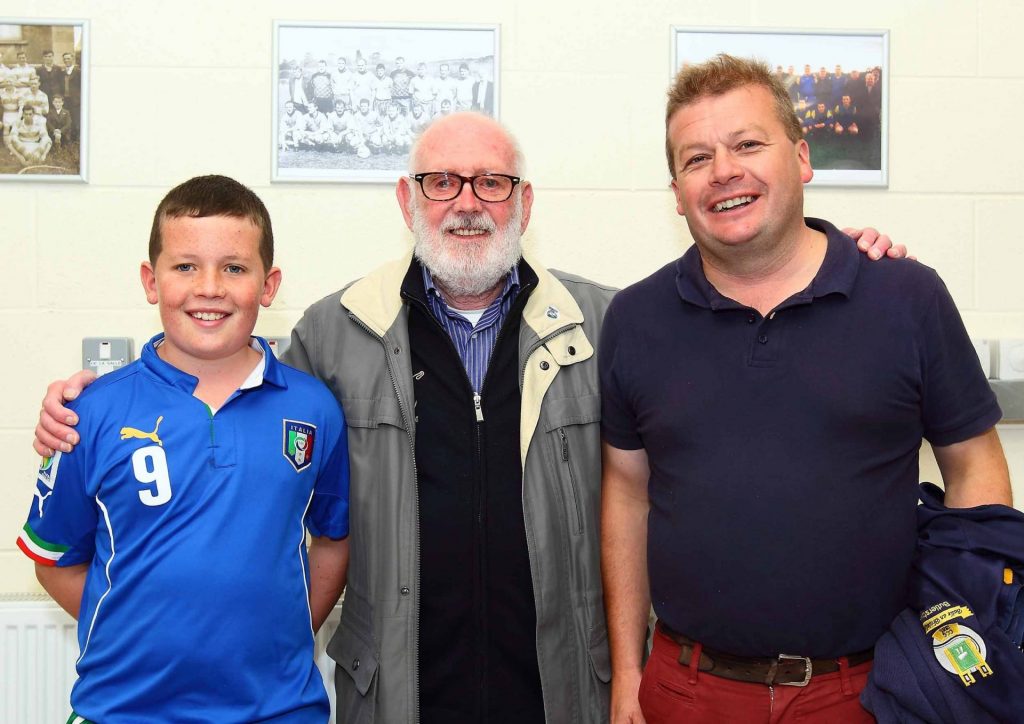 St. Joseph’s FC Club President John Grant pictured with Bryan and Philly Brown before the club played Tramore in the club’s first ever game in the Waterford Premier League back in August of 2014. Photo: Noel Browne.

Ireland’s oldest club St. Joseph’s bid a sad farewell to their legendary Club President John “Bubbles” Grant, who passed away on New Year’s Day at the age of 92. A much loved character not only in the soccer world, but also in the world of horse racing, “Bubbles” gave many years of loyal service to his beloved Saints.
His love affair with soccer began when his late father brought the victorious Waterford FC team around the city back in 1937 after winning the FAI Cup Final, but he could have easily become a jockey in his early years before eventually going to work for Waterford Corporation.

CORINTHIANS’ START
It wasn’t until he was 21 that he first started playing the game of football and he was one of the founding members of the Corinthians Football Club back in 1947 where he was elected secretary of the club and they played their games in Kilbarry.
After making contact with a man called Michael Giles within months of the club been founded, “Bubbles” was making money to ensure that Corinthians would survive and after having a Junior team, he was keen to ensure that the club had a team in the Schoolboy League.
But it was the decision of Corinthians not to ratify a Schoolboy team at a special meeting that proved to their loss and St. Joseph’s gain as the highly respected football man left the club and was left wondering what the next adventure would be.
A change in lifestyle was also in the offering when he became a fireman with Waterford City and County Fire Services where he held the post of Sub-Officer, but it wasn’t long before there was a knock at his Cathal Brugha Street door and that’s when he became a relationship with St. Joseph’s.

VITAL KNOCK
That knock came from Willie Toms, Denis Keating And Tim Galvin back in 1952 and within a 67-year period he became the club President and had their grounds at Williamstown named after him. He was a very proud man when St. Joseph’s were competing in the Premier Division a few years back and when they won a Youth League. He was loved by the players and the greats of St. Joseph’s for his loyalty, passion and hard work.
There’s no doubting that “Bubbles” was always well able to tell a great story about the great men that came out of St. Joseph’s like Alfie Hale, Paddy Toms, the late Joe Goulding and legendary Walter O’Mahony to name but a few, however his own contribution to the club will never be forgotten.
He did an awful lot of fundraising for his beloved club and in recent years was marking the pitch at their new Williamstown home. He always took pride in the achievements of the club and spoke passionately at their 90th anniversary back in 2013 about how people need to keep the club going in the future.

RECENT SUCCESS
Bubbles didn’t only have a love for soccer, but also a passionate love for horse racing and in recent times was a front man, along with his son Martin, in the Fastey For Fun Syndicate, who have horses in training with respected trainer David O’Brien.
Starting out with the horse Icelip, a winner at Tramore, he also was involved with Double Windsor, Minx Tiara and the recent Tramore festival winner Cusp of Carabelli, who won twice at the August meeting before winning last time out at Thurles.
His funeral was celebrated at Ballybricken Church on Saturday last where St. Joseph’s held a guard of honour before he was laid to rest in St. Otteran’s Cemetery.
Pre-deceased by his wife Bridget, sons Eddie and Pat, and daughter Carol, John is survived by sons, John Thomas, Martin and Paul, daughters, Kathleen, Maria, Joan, Angela, Anita, Deirdre, Imelda, Monica & Elaine, brother Francis. daughters-in-law, sons-in-law, grandchildren, great-grandchildren, nephews, nieces, relatives and his many friends to whom we offer our deepest and sincerest sympathy. May he rest in peace.