Ryan retires at the top of her game 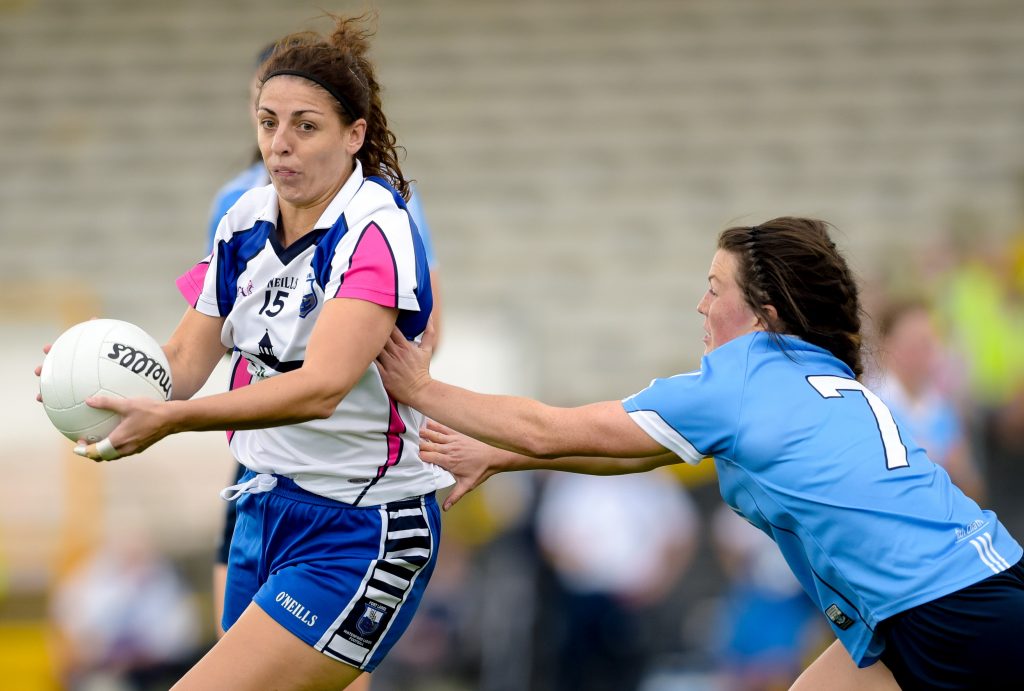 After a wonderful 19 year career, Michell Ryan, has stepped away from the Waterford senior ladies football panel. Photo: Inpho.

After 19 seasons, towering Ballymacarbry forward Michelle Ryan has called time on inter county football. She went out at the top as the last five have been the best of her career.
1-3 off the bench in the 2015 All Ireland intermediate final against Kildare, five points from play against Cork in 2017 and 3-3 against Cavan in 2019 were her finest hours in a white and blue jersey. She helped maintain Waterford’s senior status in 2018 with two first half goals in a relegation play-off against Tipperary. Ryan’s over the shoulder scores off that reliable right boot were her trademark.

FROM MASCOT TO STAR
With her father Michael training club and county teams from 1982 onwards, Michelle became the team mascot. “Dad was always going off to training whether it was the Millfield with Ballymac or Dungarvan or Dunhill with Waterford. I enjoyed getting into the back of the van with all the gear and going off and watching the trainings. One of my favourite things to do was to be behind the goal when they were taking shots, catching it and wanting to take a few shots myself. Dad was a huge source of inspiration to all of us.”
Ryan was on the Ballymacarbry senior squad as an under 14 player and joined the Waterford set-up as a minor in 2001. “One of my biggest inspirations was Marie Crotty. She was actually my babysitter when I was very, very young! There’s a photo of me in her arms in Croke Park when they won the 1986 All Ireland. I think I was only ten months old!”
After falling on hard times and suffering relegation in 2009, Ryan re-established Waterford as a senior force. She lined out in three All Ireland intermediate finals at Croke Park. In 2010, she kicked eight frees as Waterford lost to Donegal by two points. They tasted defeat again two years later to Armagh. She saw her second half penalty saved as the Orchard County prevailed 1-12 to 1-5. She scored 1-6 in a player of the match display against Fermanagh in the semi final. At the third time of asking, Ryan was among the subs for the 2015 final. When called upon, she shot 1-3 in the closing 23 minutes. Younger sister Sinead supplied the assist for the goal into the Canal End.
Back in the senior ranks, Michelle won back her place on the team. She was named Munster player of the year in 2017 as the Déise beat both Kerry and Cork at Fraher Field en route to their first provincial decider in ten years. Regaining Division 1 status last season was another major milestone. 3-3 in the Division 2 semi final against Cavan on a blazing hot afternoon in Banagher was a blast from the past. “I think the last time I got 3-3 I was playing a primary school nine a side down in Walsh Park when I was very, very young! It’s been a while!” Her early goal in the final sent Waterford on their way to a 5-13 to 1-17 over Kerry. Michael embraced her at the full time whistle. “I don’t remember another Waterford performance where it felt like everything clicked.”

A HAT-TRICK OF LEAGUE MEDALS
She is the proud owner of Division 1, Division 2 and Division 3 medals. The Division 1 title came in her first season on the panel. She remembers the aftermath of that win over Mayo for an unusual reason. “It was around the time that drug testing was introduced in ladies football and at the end of the game, while we were all celebrating, someone appeared by my side and told me that I had been selected for a drug test! I couldn’t but laugh because I was number 29 on the panel at the time. It was myself and Deirdre Breathnach. We missed the whole banquet afterwards, missed all the food and were brought off for a few hours. That made it a standout moment for me!”
She was selected on the team of the league four times over the last decade (2010, 2011, 2014 and 2019) and was twice nominated for All Stars (2010 and 2012). In the summer of 2012, she travelled to Toronto to play in the All Star exhibition game. She boasts five inter provincial titles with Munster (2007, 2009, 2011, 2018 and 2019). Not to mention 21 senior medals with Ballymacarbry. And counting.