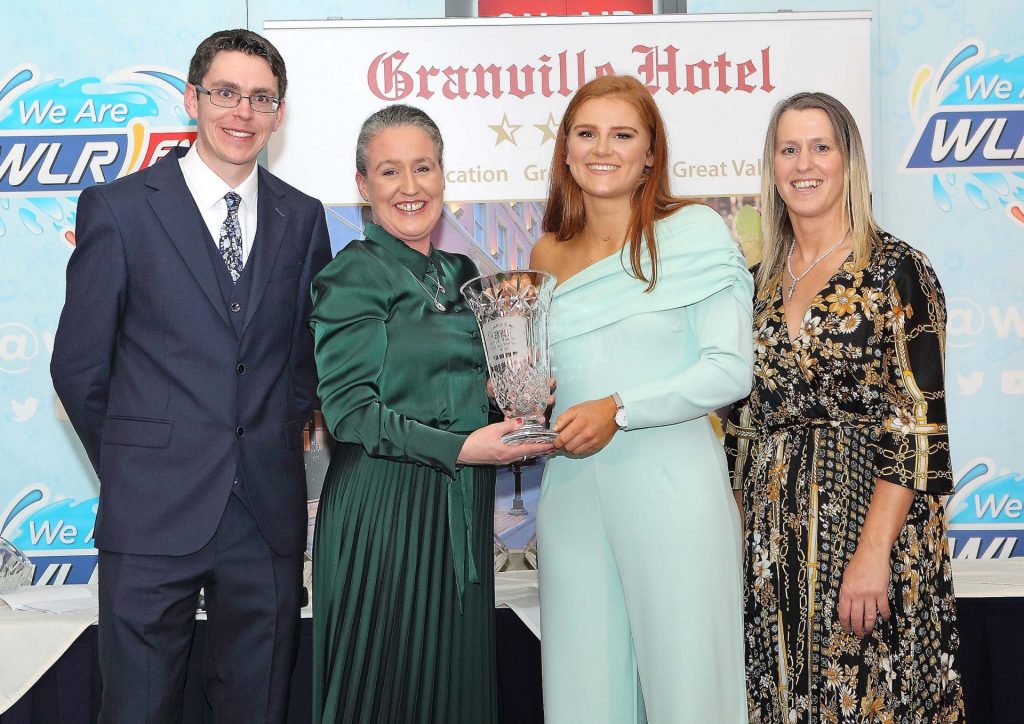 De La Salle and Waterford camogie star, Beth Carton became the first back-to-back overall winner of the WLR/Granville Hotel GAA Awards on Saturday night at the Granville Hotel.
Beth had another wonderful year in 2019. It began as she played a starring role as University of Limerick made it four Ashbourne Cups in a row while also starring for the Déise in the National League.

BRILLIANT BETH
Then came the championship and Beth was on fire once more, scoring an incredible 5-36 as Waterford, under manager Donal O’Rourke, made it back to the All-Ireland quarter-final where they narrowly lost out to Galway, who went on to be crowned as All-Ireland champions in September.
Also in September she starred for De La Salle as they won the All-Ireland 7s title in Dublin, defeating local rivals Gailltír in the decider. She was also named as player of the tournament.
A great year finished for Beth with her picking up her second successive All-Star award (along with Déise colleague Lorraine Bray. Then in November Beth and Lorraine and Waterford captain Niamh Rockett travelled to New York as part of the All-Stars tour. Quiet a year indeed and fully deserving of retaining this great award.
Beth received her award from special guest, Mary O’ Connor, CEO of the Federation of Irish Sport and a 12 time All-Ireland winner between camogie and ladies football with Cork. The Killeagh legend was a very popular guest on the night and gave a very insightful and interesting view in each interview with the 12 monthly winners. Another star performer on the night was MC Gavin Whelan, who once again excelled and showed his encyclopedic knowledge of Waterford GAA with his easy style of interviewing.
Damien Tiernan began proceedings excellently and also introduced Marguerite Casey and Managing Director of WLR Des Whelan to present the Kevin Casey Emerging Young GAA Player Award in memory of the late WLR Sports Editor, to Waterford ladies football goalkeeper Rosie Landers of Ballyduff Upper.
Despite winning the 2018 award, Beth did not see a repeat coming on Saturday night.
“Absolutely shocked,” she said when receiving the award. “I definitely wasn’t expecting to be back up here (on stage) again tonight. It’s great for my family, I suppose, and the club. And the girls I’ve been training with all year; they’re the ones that you put in the hard slog with, the ones that pick you up when you’re down, and are there for the good times too. Truly, this is dedicated to all the girls that are at home tonight but truly deserve this.”

STEEPED IN THE GAA
“Everyone here will know that we’re a huge De La Salle family and the club has been absolutely fantastic to me and of course my family are brilliant as well. You wouldn’t be able to play inter-county GAA without the huge support of your family. They know how to deal with the mood swings, if you have a bad game they’re the ones to pick you back up and if you have a good game they’re the ones that will bring you back down to earth.”
Beth had a brilliant year in 2019 but definitely one of the highlights was being part of the All-Stars trip to New York. “It was a fantastic opportunity. To play with girls from other counties was great and we all mixed and got on very well and it really was a trip of a lifetime and something I’ll always remember.”
Phenomenally Beth scored a wonderful 5-36 during Waterford’s championship campaign in 2019 but she wasn’t getting too carried away by that. “5-36 sounds great but as the rest of the girls keep reminding me, most of that was from frees.”
So what are Beth’s aims for 2020. “Our big aim would be to get back to the quarter-finals of the championship once again but we’ll take it game by game, starting with the league which is coming up very shortly. Every year at this time you start from scratch and nothing is guaranteed. We have a tough enough group but it’s all about keeping the head down and working hard under new manager Fergal O’Brien, coach Dan Shanahan and the rest of the backroom team.”

500,000 downloads in a day for Covid app developed in Tramore