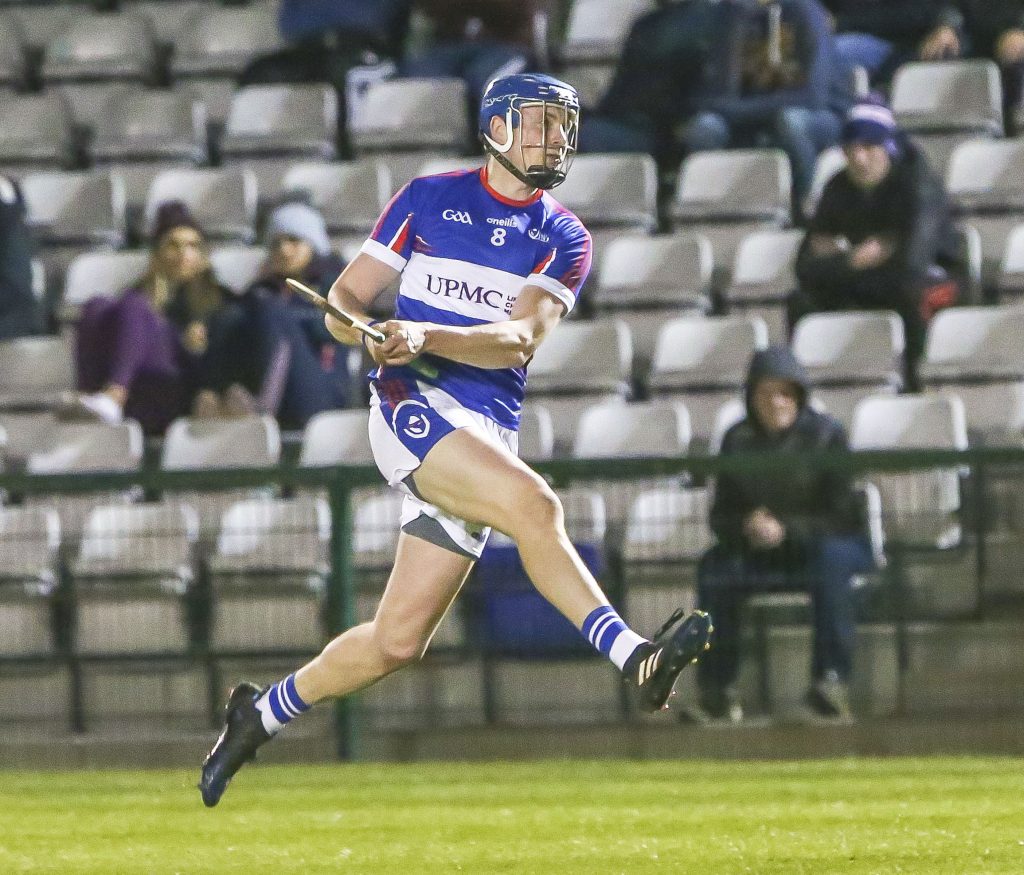 Austin Gleeson was in great form for WIT in their Fitzgibbon Cup opening round win over LIT in Limerick on Sunday. WIT and Waterford will be hoping that the injury that forced him off is not too serious. Photos: Maurice Hennebry.

Waterford I.T. got their Fitzgibbon Cup campaign off to the perfect start with this impressive away win over old rivals Limerick I.T. in Moylish on Sunday last. Previous visits by the Waterford side to the open venue in the shadow of the Thomond Park stands had proven difficult assignments but on this occasion the outcome was never really in doubt as Fintan O’Connor’s charges dominated the play from the start and were in no way flattered by their nine point winning margin at the final whistle.

BIG WATERFORD CONTINGENT
A feature of the game, from a Waterford perspective, was the inclusion of nine players from Waterford clubs in WIT’s starting fifteen and two more coming in as substitutes while each of the five county senior panellists in the side were at the top of their game.
From the very start the Waterford side took control with top scorer Stephen Condon opening his account inside a minute, sending over a free from midfield and Austin Gleeson following up with two points from play before Tipperary U-20 All Ireland star Billy Seymour opened the home side’s account from a free in the 8th minute. A further LIT point from Brian McDonagh left just one point between the sides but by the end of the first quarter the visitors had moved into a four point lead with two more points from frees by the accurate Stephen Condon either side of a great strike from Tom Barron.
With Calum Lyons dominating under puck outs in the WIT halfback line and Austin Gleeson driving forward from midfield it was left to Seymour to keep his side in touch from frees as he sent over two more to one coming back from Lyons. The Ballyduff player set up Condon for a great score from play and after Tom Barron broke through for a shot on goal that was deflected off the keeper, the play was called back for a free which Condon sent over. It was all one way traffic at that stage as Lyons and Gleeson combined for the latter to send over his third point in the 22nd minute.

WIT IN CONTROL
With the game going into the last five minutes of the first half LIT enjoyed their best spell with Seymour sending over two further points from frees and Kevin Howard finding the range from play but WIT were not flattered to retain their six point advantage at the break with points from Robbie Flynn and further strikes from Stephen Condon and Austin Gleeson frees for 0-13 to 0-7 halftime lead.
On the resumption the lead was increased with another Condon point before a brace from Seymour cut his side’s deficit to five points, lifting the home side’s hopes. Those hopes were soon dashed however, as the tenacious Eddie Meaney shook off the tackles in the 34th minute and broke through to shoot to the net from close range. Austin Gleeson followed up immediately with a point and from then on the issue was never really in doubt.
A LIT point from Brian McDonagh was followed by an exchange from frees between Condon and Seymour before Tom Barron sent over his second point of the game and after another Seymour free cut the WIT lead to eight points, two points apiece from Condon (1F) and Jack Prendergast effectively sealed the issue. The closing minutes saw LIT battling to narrow the gap as Seymour sent over two more points from placed balls against a further score from Condon before a last gasp 20 metre free was sent to the net by the Kildangan marksman to put a better look on the scoreboard at the final whistle.

GLEESON INJURY
It was an impressive performance by WIT with every player playing his part and with Calum Lyons, Austin Gleeson and Stephen Condon the standout players on the day. There was some cause for concern, however, towards the end of the game when Austin Gleeson crashed to the ground heavily on his knee and had to be helped from the field. Connections will be hoping the injury is not serious enough to keep him out of next Sunday’s crucial tie with T.U I. D. (alias D.I.T), in Carraganore or indeed, Waterford’s opening League game against Cork a week later.
While the performance here will be a big confidence booster for WIT going into the next two games it is difficult to gauge just how good the opposition was last Sunday. For the first time in many years there were no big name players in the Limerick side, apart from Billy Seymour, and what was really noticeable was the absence of any players from the big Limerick or Clare senior clubs. Still, it was a strong performance by the Waterford college against what was put in front of them.

Times and venues released for next weekend’s Co. SHC quarter-finals