THE pending North Quays project, in addition to the advancement of the Kilkenny (Waterford to New Ross) Greenway ought to deepen collaborative links between Waterford and Kilkenny’s local authorities.

“We held such meetings during the lifetime of the previous Council and I felt they proved beneficial,” he said. “But we’ve yet to hold a similar meeting since last summer’s election and we’ve now reached a stage where certain matters are positively advancing, such as the North Quays and the Greenway. In recent years, to this body’s credit, we have championed the regional dimension when it comes to a range of developments, be it UHW, the Technological University, the Port and so on. The commonalities at play for this area benefit from clear lines of communication between both Councils.”

A letter will be sent to Waterford City Hall by Kilkenny County Council to suggest the revival of such meetings.

Meanwhile, Kilkenny County Council’s Economic Director of Services said that Falcon Real Estate Development’s North Quays project will eventually house approximately 500 people in its 300 riverside apartments. The submission of Falcon’s planning application had been “long awaited”, said Mr McKeown, who sits on the North Quay Steering Group. Given that the North Quay site is a Strategic Development Zone (SDZ) and should the objectives of such a designation be met, Mr McKeown noted: “There is no appeal mechanism to An Bord Pleanála.”

He added: “As far as I can see, the components of the planning application are very much in line with what has been outlined in the SDZ objectives so I would expect the SDZ to be approved.”

Detailed design is progressing for the access infrastructure to and from the North Quays, along with the new flood defence works which the three-to-five year project demands. Discussions between Waterford City & County Council and the relevant Government Departments in relation to the project’s State-supported funding “have been all very positive”, according to Mr McKeown. 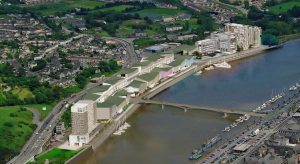 The Kilkenny (Waterford to New Ross) Greenway will run through the North Quays development.