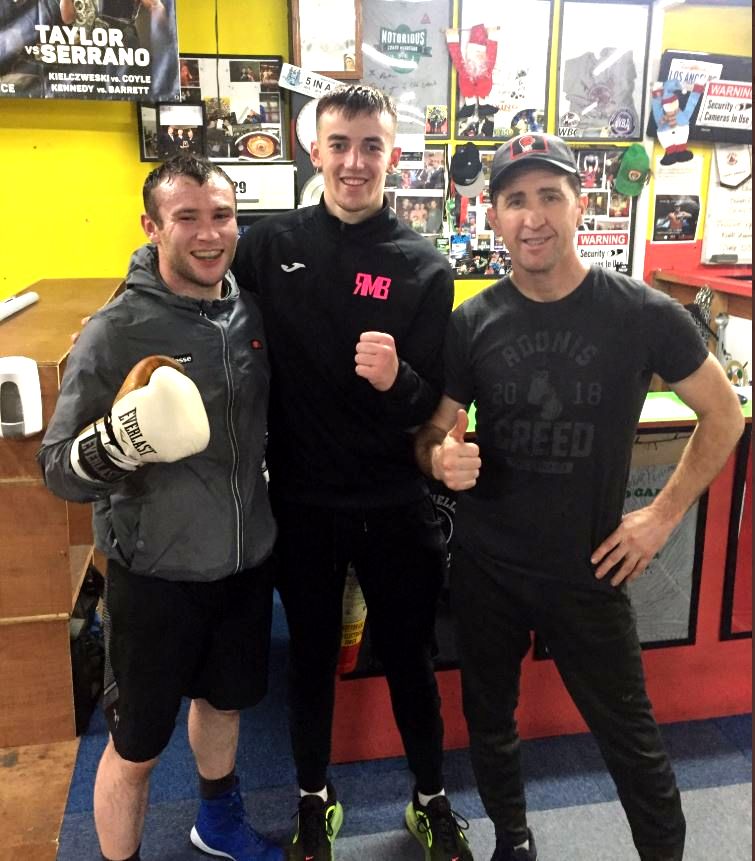 Rhys Moran (centre) preparing for his professional debut in Belfast on February 1.

Young Waterford prospect Rhys Moran will punch for pay for the first time in Belfast on February 1.
The Déise fighter has been training at the Celtic Warrior Gym and has been bidding his time waiting for debut news.
Moran will fight without the vest for the first time on the ever growing Celtic Clash X card.
Who Moran will face has yet to be revealed, but he won’t be to picky eager just to get the ball rolling.
The super middleweight decided to turn professional following the National U-22 Championships at the start of 2019 and, in many ways, looks to be perfect for the paid game.
Young but with pedigree, power, and popularity, the 6’4″ Tramore puncher has been training under Paschal Collins alongside the likes of Niall Kennedy, Spike O’Sullivan and Craig O’Brien for some time now
Speaking when revealing the move into the pro ranks earlier this year Moran told Irish-boxing.com: “I just thought my time was up in the amateurs. I felt, myself, in my own personal achievements, that I’ve done what I wanted to do in the amateurs.”
“I decided to turn over and I’m currently training in the Celtic Warriors Gym in Dublin. Paschal’s doing a bit of training with me.”
Just turned 21, Moran was a very solid amateur and described how “I’ve boxed six times for Ireland, I won a silver at the Odivelas Box Cup, I won the Celtic Box Cup three times, I’ve an Irish Colleges Youth title.”
“I won the Under-18 Championships back in 2016 and competed in the Europeans. I got to the last 16 where I was beaten by a Georgia, who was a very good fighter. All through my amateur career I’ve been boxing the best lads, Michael Nevin, Kieran Molloy, Tommy Hyde, I’ve victories over some and losses to others.”

EXPERIENCE IN THE BAG
“I wanted to go (pro) at 15, 16! But I was always told I was too young, that I’d have to go abroad to do it, that I hadn’t gotten any international experience with Ireland yet. So, I got two Irish titles, I boxed six times for the country, I boxed at Senior level, I won the Munster Elite title where I stopped a man eight years older than me in 40 seconds. I’ve got that expereicene now.”
Also recently added to the stacked card is a rematch between Julio Cesar and Sean McGlinchy as well as a fight for Katelynn Phelan.
The Boxing Ireland bill is headlined by Eric Donovan v Cristian Montilla and also features a rematch between Julio Cesar and Sean McGlinchey, as well as slots for Dominic Donegan, Owen O’Neill, Senan Kelly, Aaron Gethins, James Lynch, Kelvin McDonald, Conor Cooke, John Joyce, Sam Carroll, Conor Doherty, and Tony McGlynn.
For more check out www.irish-boxing.com.