Villagers are back on winning cup trail 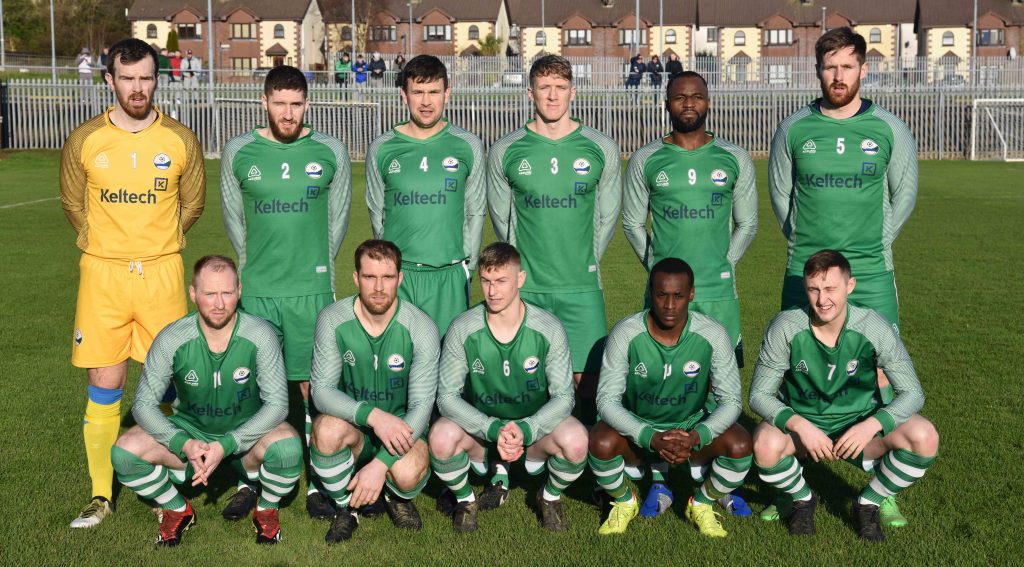 The Ferrybank team that defeated Drumcondra in the New Balance FAI Junior Cup at the Village Grounds on Sunday afternoon. Photo: Luke Myers.

Ferrybank eased impressively into the sixth round of the New Balance FAI Junior Cup after proving too strong for Dublin side Drumcondra in their cup clash played on a pleasant Sunday afternoon to overcome their previous weekend defeat to Waterford Crystal at the Village Grounds.
After the game was due to be played in the capital before Christmas only to be called off due to an unplayable pitch, the Waterford Premier League leaders showed their class from the early stages of the tie with their opponents failing to recover from conceding two goals in the opening ten minutes.
It was a good performance from Richard Gaffney’s side as they controlled the game from the opening whistle with the lead goal coming on two minutes. Stephen Imiren was the man that found the space out on the right before crossing into the penalty area where Eoin Rhodes was on hand to power a header past Mark McGonigle.

PERFECT OPENING
Things got even better for the home side with ten minutes played in the first-half when Meschac Babatu raced forward to meet a pass in the area from the immense Thomas Whitty and after the ball broke for him to square to Paul Phelan, he had no problems in tapping home from close-range.
The former League of Ireland club brought themselves back into the game five minutes later when they pulled a goal back when Des Kelly whipped in a left-wing corner that saw Tarik Allag bring a brilliant save from Kevin Burns, but defender Colm McGonigle blasted the close-range rebound to the back of the net.
Eoin Rhodes was denied his second goal of the game with 21 minutes on the clock when the attacker player rose unchallenged to meet a Paul Phelan left-wing corner kick, but keeper McGonigle arched his back to superbly tip the ball over the crossbar.
Stephen Imiren was the next player to go close for the Villagers five minutes later when Kevin Hurley’s left-wing cross picked the youngster out at the back post and after turning the ball onto his left-foot, his effort flashed inches wide of the far post.
The hosts had a great chance to put the game to bed two minutes before the sound of the half-time when Eoin Rhodes was hacked down in the penalty area by defender Ryan Kelly, but the resulting Kevin Hurley spot-kick rattled the crossbar in what turned out to be Rhodes’ final action as he was forced off injured at the break.

GAME OVER
After Shane Dineen twice went close to increasing the lead for the home side when he headed over the bar from Paul Phelan’s deliveries into the danger area from left-wing corner kicks, it was Meschac Babatu that should have extended the lead on 54 minutes when he took a pass from Thomas Whitty, but his shot was saved.
Babatu was the man that did put daylight between the two teams with an hour on the clock when the centre forward timed his run on the right-side of the area to meet a pass from Adrian Rockett and he drilled a low shot past Mark McGonigle to the far corner of the net.
The writing was well and truly on the wall when Thomas Whitty added a brilliant fourth goal after the midfielder showed the pace to outdo Drumcondra goalscorer Colm McGonigle on the left-side and he beat the latter’s namesake with a neat right-footed finish to ensure a passage into the next round.