THE long-awaited redevelopment of Walsh Park has moved a step closer to fruition following the allocation of €3.75 million in Government funding on Friday last.

The monies, made available through the Department of Transport, Tourism and Sport’s Large Scale Sports Infrastructure Fund, will permit the Waterford GAA County Board to “advance the project”, hopefully in the late summer.

Speaking to the Waterford News & Star, recently appointed County Board Chairman Sean Michael O’Regan welcomed the funding, which will cover at least half of the stadium’s redevelopment budget.

“This process began back in April 2018, we submitted a planning application a year later so to have reached this point so early in the New Year is great news for Waterford GAA,” he said.

“And we’re now moving onto the next stage of the process, which will involve us sitting down with both Croke Park and the Munster Council to help advance the next phase of the overall development.”

It’s hoped that the Board, with State funding now behind it, will be able to successfully make a case to the GAA hierarchy with a view to securing the remaining monies – at least €3 million – required to redevelop the ground as a 16,500 capacity venue.

Talks on that element of the plan have been, according to Mr O’Regan, “very favourable up to now and we don’t see that changing”. At present, the Board does not intend to impose “a serious levy” on the county’s clubs as a result of the stadium project.

According to Minister of State John Halligan (Independent Alliance): “This is fantastic news for Waterford and marks a significant investment into Gaelic games in the city and county. The funding will cover the demolition of the existing dressing rooms, the construction of the brand new covered western stand terrace, the construction of the new uncovered northern stand, new dressing rooms and toilet blocks as well as improvements to drainage, pitch irrigation and fencing.”

Said outgoing Senator Paudie Coffey (FG): “This is a project I worked closely with (the) Waterford County Board and Minister for Sport Brendan Griffin to get over the line and was delighted to invite the Minister to Waterford to see the plans for himself. As a GAA man and as I am about to leave politics I’m so happy that Waterford will now have a stadium to be proud of.”

According to fellow Portlaw native and Fianna Fáil TD Mary Butler: “I was delighted to hear the County Board had received this funding, which will help them to develop a ground that both the GAA and the people of Waterford can be proud of.”

Sean Michael O’Regan thanked “all the public representatives from all parties who have supported the vision we have for Walsh Park, along with of course the local residents whom we will continue to discuss the development with over the coming months”.

The intention is for (weather-dependent) physical works to commence at the Keane’s Road venue shortly after the completion of the Munster Senior Hurling Championship this summer. Waterford will host Tipperary and Cork on May 10 and 31 respectively. 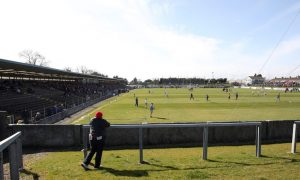 Funding of €3.75m for the redevelopment of Walsh Park was announced by the Department of Sport on Friday last.             Photo: Inpho