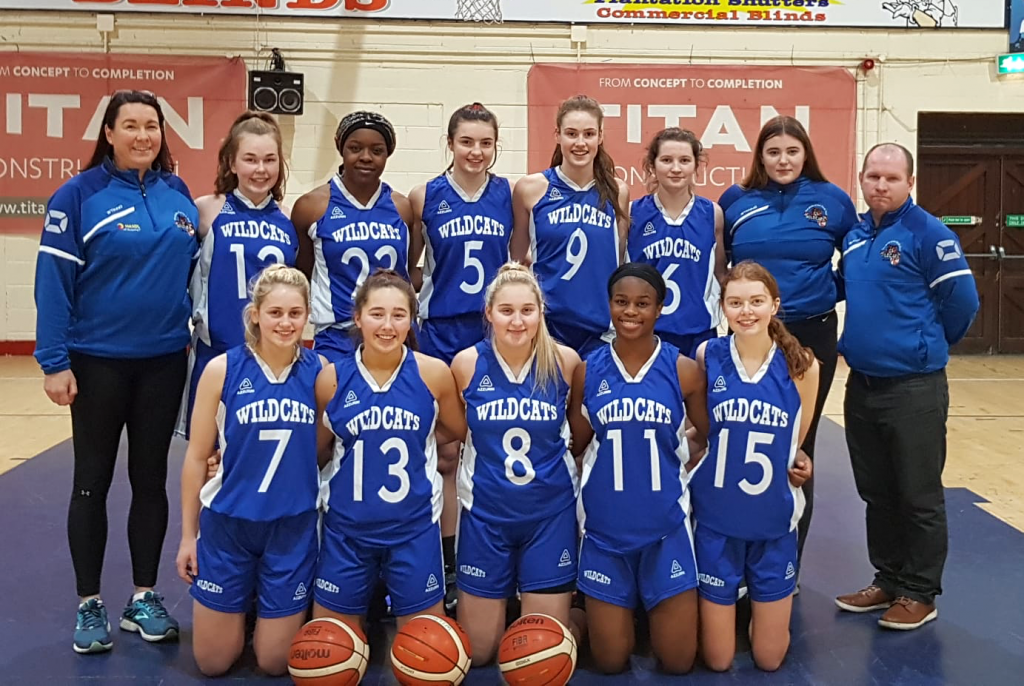 The Wildcats U-20 squad who defeated the Portlaoise Pathers in their National Cup semi-final in Cork on Friday night.

Waterford Wildcats are through to both the U-18 and the U-20 National Cup finals after coming out on top in two tense semi finals this past weekend. Both teams are coached by International coach Tommy O’Mahony who has already guided the Mercy Secondary U-16 and U-19 teams through to the schools Cup finals just days prior to the club Cup finals.
A number of players are involved in both events so there’s a massive task ahead for coach O’Mahony and his players over such a short time frame. All finals will be played in the National Basketball Arena, Tallaght, Dublin in the last week of this month.
At 8pm last Friday night, Basketball Ireland’s festival of Cup semi finals at various age levels in both codes tipped off in the Neptune Stadium Cork City. The first game to get the event up and running involved Waterford Wildcats, the pride of the South East, and midlanders Portlaoise Panthers who had five youth internationals in their line up. This Wildcats outfit who lost the U-18 Cup final by a single basket last season have all eyes on the big prize this year and their determination was obvious as they led by 16 points at the half way stage and looked on track to achieve their goal. However, this Panthers side include a number of amazing shooters and those same hot shots cut the deficit to just 8 points midway through the third quarter as Wildcats found scores hard to come by. Debbie Ogayemi made two from two on the line to steady the ship leaving Wildcats ten to the good with the final quarter to play.

RAINING THREE POINTERS
Now it was a matter of some solid defence from Wildcats and a couple of baskets to get the job done but Portlaoise had other ideas as they blitzed the Wildcats net with four three pointers in succession while Wildcats responded with a single three pointer. Two more of the same from the opposition making it six three pointers in the later minutes leaving Wildcats leading by the minimum and unlikely to hold on. But this Wildcats team have faced similar situations in the past and the experience stood to them as they held out to hit the final points of the game which gives them a place in the National Cup U-20 final at the end of January. Final score Wildcats 81, Portlaoise Panthers 77. Wildcats will face the pick of Ulster in the shape of UU Tigers after they proved 8 points too good for Dublin’s Templeogue in the other semi-final.
While every Wildcats player gave the best of themselves there were some outstanding performances. Top three scorers were Debbie Ogayemi who played with a broken finger strapped up and contributed 13 points while the always reliable point guard Abbey Flynn notched up 17 and Kate Hickey who had her finest game in a Wildcats shirt finishing as the games top scorer with 26 points. 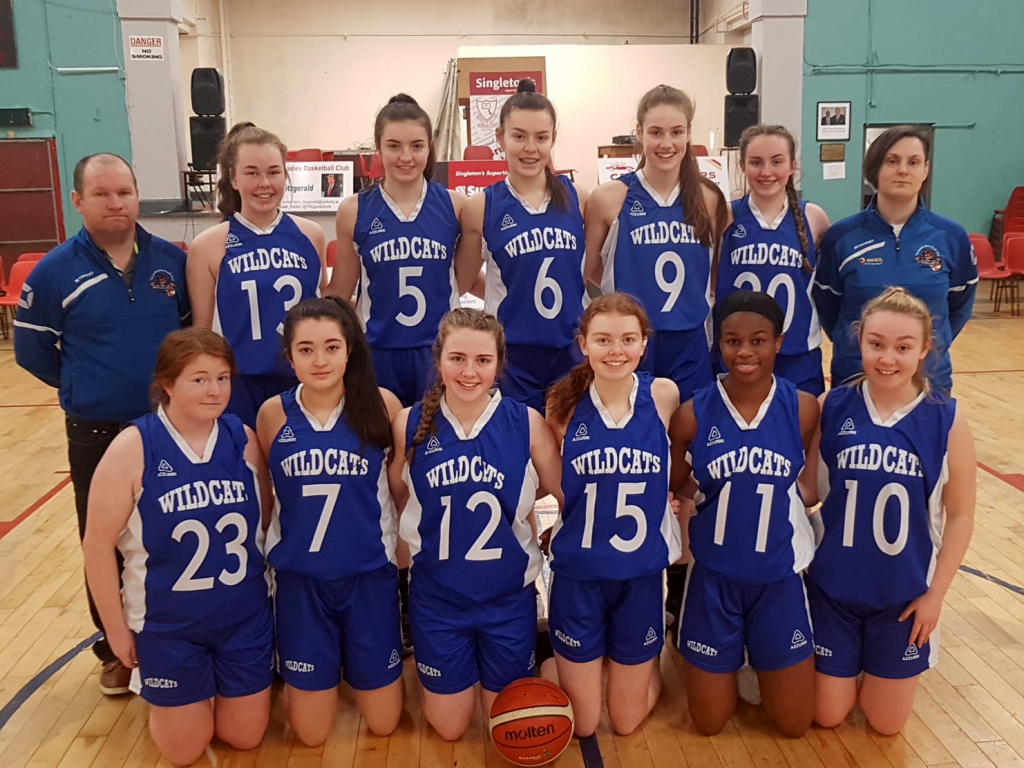 The Wildcats U-18 squad who defeated DCU in their National Cup semi-final in Cork on Sunday.

U-18 Semi Final
On Sunday morning in the U-18 Cup semi final it was the Wildcats v DCU. The Dubliners were quick off the blocks racing into a 12 points to five lead after five minutes. Most of their scores came from the free throw line as a nervous Wildcats side committed numerous silly fouls. As the game progressed Wildcats gradually got their game together with the Hickey sisters Kate and Sarah finding their scoring touch.
Down by four at the break Wildcats had it all to do so a disciplined defence and better finishing was required. Minutes after the restart Wildcats were in front as they carried out their coaches orders to perfection. They appeared to go 10 up with seven minutes to play when Kate Hickey drove inside for a basket, but the referee called foul for a charge and Wildcats most influential player at the time was forced to the bench on four fouls. DCU came storming back and had the difference to a single basket before two big scores from Anna Grogan left the large number of Wildcats supporters breath a little easier. Then Bami Alukayode who was outstanding throughout scored two wonderful baskets to put the required distance between the teams to give Wildcats a place in the final where they will face hot favourites Portlaoise Panthers who accounted for Brunell in their semi-final.
Top scorers for Wildcats Kate and Sarah Hickey on 16 points each and Bami Alukayode on 10.

SUPER LEAGUE
This Saturday WIT Wildcats focus on the Super League with a home game versus table toppers DCU who must be reeling after their shock cup semi final defeat to Corks Brunell BC. Wildcats are in joint second place after some good results recently. This is as tough a game as they will face but home advantage may prove crucial in what is sure to tense affair. The Dubliners are no doubt a wounded outfit and will be keen to get back to winning ways while a win for Wildcats would put the cat among the pigeons. A full house is expected at the Mercy Sports Hall with the tip off at 7pm.