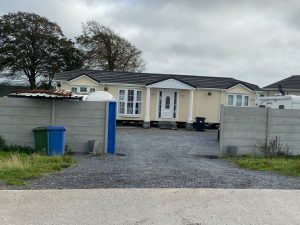 A bungalow, which was illegally erected in Carrickpherish.

A RESIDENT of Mount Suir in Carrickpherish, who asked to remain anonymous, contacted the Waterford News & Star this week to criticise both the Waterford City & County Executive and the Councillors, who he says “are neglecting their duties as public representatives by ignoring the ongoing illegal activity in the area”.

“How is it possible that caravans are allowed to be parked illegally on the side of the road, for weeks and months on end,” the resident said. “If myself and my family plonked a caravan outside City Hall or the House of Waterford Crystal, you can be sure that we’d be moved on before we even had time to tune in a portable telly.”

The resident also highlighted a bungalow, which was erected illegally without any intervention by the Council or the Gardaí.

“We can’t make a single change to our homes without planning permission, yet they can essentially build a new home for themselves,” the resident said. “There were walls built around it, gates erected and they have electricity coming from somewhere. There are planning laws and by-laws that are being broken here and nothing is being done about it.”

Sinn Fein Councillor Jim Griffin who has met with this, and other residents, told the Waterford News & Star that he has sympathy with the people who live near to the Carrickpherish halting sites.

“This is nothing at all to do with race and ethnicities, it’s to do with the law,” Cllr Griffin said. “All this resident and everyone else is asking for is that the law be implemented equally across the entirety of our city and county. We have passed a Traveller Accommodation Scheme that will hopefully give Travellers a better way of life, but shouldn’t they be expected to live by the rules of the Council who will be providing this extra accommodation? If there are bays provided, then those bays should be used and there is no need for caravans to be parked illegally on the roadside. If there are houses provided, then there should be no reason for illegal bungalows to be erected. I don’t think it’s too much to ask that if laws are broken, then enforcement from both the council and the gardaí should follow.”