“THERE is nothing like a dame,” so Rodgers and Hammerstein told us in their popular musical, ‘South Pacific’.

But at this of time of year in Portlaw, those readying themselves for the annual pantomime have a slightly different dame in mind, a character Freddie Laffan knows a thing or two about. He’s been there, done that and worn the frock more than most down in the Premier Hall!

“Between myself and Teddy (O’Brien), we’ve been the dame a good number of years alright,” said Freddie, who, along with Teddy, is a Life President of the Society.

“I used to say I didn’t want to be the dame but the directors we’ve had, more or less going all the way back to day one, used to say to me, well you’re getting it. But sure once you’re in the middle of it then, it’s great fun. Now you’d have a lot of learning to do in those years you’d be the dame but the ad libbing every night on the stage would be something else. You’d never be 100 per cent sure where things would be going sometimes, but once you’ve people down in the audience laughing, you just keep going with it. And the more we all did it, sure the more we got used to it but you’d know when you have to draw a halt to it too, and you’d head to the side of the stage and ask for a prompt if you had to, to get back on track. And that’s happened more than once over the years! But audiences love it. Sure it’s part of the fun of a panto.”

Over a pot of tea made by his wife Ann in their home on Portlaw’s Carrick Road, Freddie’s eyes are dancing when we talk about the past four decades of pantomimes in the village.

Born in Mooncoin in 1943 to Margaret (nee Allen) and Billy Laffan, Freddie has been involved as a performer and committee member since the society’s inception. Indeed, he was one of the society’s four founding members – the others being Freddy Kelly, Billy Corcoran and Bill Furlong (all three now deceased) – who hatched the idea while on a night shift in the Tannery in 1980.

“Twas 12 o’clock at night when we started talking about it. We were all on the one shift and I was on the padding machine when Bill, Lord have mercy on him, came in. He said: ‘Lads, we’re going to have to do something for the talent in the town. We can’t leave it go asunder’. You see, we’d a ‘Tops of the Streets’ show in Portlaw for the previous seven years and it finished up because of the bother it ended up causing between people, between families in a few cases; you had relations not talking to each other for ages because of it. The whole thing got too competitive, people were spending too much money on it and all of that took the fun out of it.

“One of the rules had been that you couldn’t bring in someone outside of your street to produce your own act, but people were brought in and that didn’t help things in the long run.”

The ‘Tops’ rehearsals on each street predominantly convened in a single house. “You could have 20 or more people in your house at any rehearsal. We were like sardines a few nights! The biggest pity of all, though, looking back, is that we’ve no photos at all of any of the ‘Tops’, there weren’t cameras around in those days like there are today. The shows were absolutely brilliant and the street acts used to travel – Connolly Road went to Ardmore one year, I was living in William Street at the time (coming together with Queen Street and Bridge Street for the act) and we went to Mooncoin. They were great times. So when it all came to an end, knowing there was so much talent in the town and knowing how much people enjoyed going to the ‘Tops’ – there were up to 600 people in the hall some nights – sure it would have been a shame to let it all go entirely.

“Between the four of us that night down below in the Tannery, we thought a panto would be worth staging. So we called a meeting in October 1980, there were 12 to 14 of us there, Maurice Foran became Chairman and ended up being chair for 13 years – he was absolutely brilliant – and things went from there, and ‘Cinderella’ was our first show. And here we are now, getting ready for the 40th pantomime (which will run from February 6 to 9). It’s been great to keep it going. I was up on the stage for the first 35 of them and that was a good old run and I’ll be back up on the stage this year as part of the mime – and that’s enough for me. Between being up on the stage or helping out in some way off the stage, it’s lovely to still be part of it.”

Having finished national school at 14, followed by a year in ‘the Tech’, Freddie got a job in the Irish Tanners plant across the river in Portlaw. Having been left off by the Tannery in 1960, Freddie made for Waterford Crystal where he spent three months (“I didn’t like it”) before he was called back to the Tannery where he worked until its gates shut in 1985. He was 44 at the time.

“But I was never idle after that,” said Freddie. “I gave 10 good years inside in Garrett (in the city’s Cork Road industrial estate), 12 months in Mount Congreve and 10 years on the bakery van. It was actually great to end up working in a few different places, but of course when the tannery shut, it was a very tough time for the town. It was heavy work. But all in all, it didn’t work out too badly for me. I was lucky.”

Freddie, one of eight Laffan siblings, also met Ann via the Tannery.

“I used to admire her when she’d come down to the canteen to her father with tea at six o’clock in the evening. I was 16 the first time I met her. She was 14. Sometime after that, I met up with Ann at a dance in Portlaw. I was going out with her for four, five years on and off but I’m in Portlaw now for 52 years, we were 52 years married in August. And she does everything for me. I know how lucky I’ve been. We’ve two sons, Kieran and Derek, and we’ve five grandchildren now, three girls and two boys, and they take up most of my time now, which is great. To see them all doing well is all you can ask for.”

Having turned 77 this week, Freddie stated, without any self-pity I could ascertain: “Most of my friends are dead now. It’s just the way of things the longer you live, isn’t it? Now if Freddy (Kelly) was still alive, I’d probably be still more involved in the panto more than what I am. Freddy and I retired around the same time and there were a good few years after that, around October time, when he’d come up to the door and ask whether we’d take a little part in the panto, and whatever he wanted to do, I went along with it. We used to be paired off a good bit on the stage and we sparked off each other well. It was always great craic with Freddy, Lord have mercy on him, and all the other lads below in the hall, and when we did Scór. Sure we’ve had great characters in Portlaw over the years. It’s been a great place to live and it’s been very kind to Ann and myself, between good days and great nights in the hall or below in ‘The Pig’ (and Whistle Pub) and The Clodagh (Bar). Life’s been good to me and it still is, thank God.” 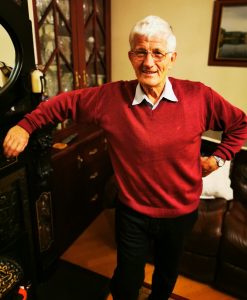 Freddie Laffan, who turned 77 this week, is pictured in his Portlaw home.