THE people of Portlaw are attempting to come to terms with the second shocking death in their community in just 13 months.

John ‘Pot’ Butler (48) was pronounced dead at University Hospital Waterford at 4am on Saturday last despite the efforts of hospital staff and local medics who had initially tended to Mr Butler in the hallway of his Brown Street home.

The deceased, whose Requiem Mass was held at the nearby St Nicholas’s Church on Wednesday, was a native of Treacy Park, Carrick-on-Suir.

A Section 3 assault causing harm charge issued last Sunday was withdrawn by the State and the accused has been remanded in custody until Thursday, February 6. Bail for the accused is to be sought via the High Court in the coming days, defending solicitor Ken Cunningham told the court.

The surreal presence of a police cordon at either end of a rain-lashed Brown Street made for an unwelcome sight on Saturday afternoon last, while two television camera crews sought initial reaction to the events of hours previously. In the days that followed, flowers were placed at the door of Mr Butler’s home at Number 44.

Parish Priest Father Richard O’Halloran described the situation as “heartbreaking” for loved ones of the deceased and for the wider community.

“This is a close community, a community that rallies around people when the need is at its greatest and I’ve no doubt that this unity and warmth will again be demonstrated in the difficult days that lie ahead. All we can do is offer our prayers and support at this most saddening of times.”

In the early hours of Saturday morning, John Butler (48), a native of Carrick-on-Suir, was found in his home with fatal head injuries.

An off-duty fire officer had administered initial medical attention to Mr Butler prior to the arrival of emergency services at 2.30am on Saturday. At 4am, John Butler was pronounced dead at University Hospital Waterford.

The scene was preserved for forensic and technical examination, with the State Pathologist and Garda Technical Bureau requested to attend.

The driving rain on Saturday last undoubtedly acted as a deterrent for bystanders as Gardaí conducted their technical examination of Mr Butler’s home. Brown Street, the longest thoroughfare in Portlaw, was cordoned off between Malcomson Square and Upper Brown Street for most of the day as the investigation into Mr Butler’s death got underway.

Gardaí aside, the longest continuous presence on Brown Street last Saturday were the two television news crews dispatched from Cork and Dublin to report on Mr Butler’s death.

Local Councillor Declan Clune (SF) said the news had been greeted with a sense of disbelief. “It’s a terrible shock. John was a quiet man and a good neighbour. He didn’t put in or out on anyone. He’d have been regularly seen out walking his two dogs and he loved a game of darts, be it social or competitive. John had a big involvement with the Men’s Shed group at Clodiagh House, just down the road from where he lived and he was well-liked at the Dr Martin Day Centre, where he worked (on a Community Employment Scheme). He was a gentle, decent man and he’ll be sadly missed.”

Cllr Clune’s party colleague, Carrick-on-Suir Councillor David Dunne, described John Butler’s death as “a sad loss for both the Portlaw and Carrick communities. May he rest in peace.”

Among the many kind words shared on social media, one by a fellow Carrick native, read: “It’s a pity ye didn’t all know the real John Butler, a character and a half who loved the Davin (GAA) Club.”

A post on the Carrick Davin GAA Club’s Facebook page stated: “Like the rest of us growing up in the 70s and 80s the clubhouse became a second home, especially for those from Treacy Park. Between the handball alley and the snooker table, hand-eye coordination was a given. Add this to John’s height and you got a fantastic corner back. Outside of the club John had many other interests, he loved a game of rings and he was pretty good at that aswell. He was also a fan of horse racing, loved a bet, but according to him, he wasn’t too good at that.  John’s next love, after the Davins and Tipperary, was darts. He was a regular player in the Carrick league and more than likely represented every team in it at one stage or another with the Jockey being his last team.

The post concluded: “John was a great person, a gentleman and just a nice guy to spend time and chat with. He made a new home for himself and his family in Portlaw – and the community of Portlaw would say the exact same thing about him.”

Mr Butler’s death was the second fatal assault in Portlaw in just 13 months following the death of John Lowe (53) at Coolfin Meadows in December 2018. A man has since been charged with Mr Lowe’s murder. See next week’s print edition for a report from John Butler’s Requiem Mass at St Nicholas’s Church in Carrick-on-Suir. May he Rest In Peace. 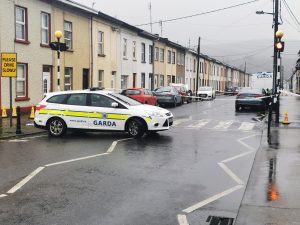 The scene on Portlaw’s Brown Street as Gardaí conducted a technical examination at the home of the late John Butler following his death in the early hours of Saturday morning last.