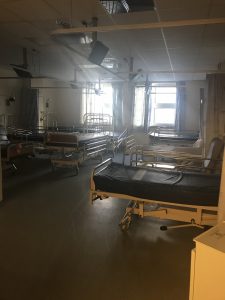 Photo shows empty beds at UHW, which cannot be used due to a lack of staff.

THE wards at University Hospital Waterford remain closed and concerned family members looking to visit loved ones are blocked by closed doors, emblazoned with the words “Outbreak Alert”. Since January 1 there has only been one day when there were less than 20 patients on trolleys in UHW’s Emergency Department. This week, the Waterford News & Star visited the hospital on three separate days to speak to staff members about why the situation in the hospital seems to be actively getting worse. (Note: Hospital Management have constantly warned staff members about speaking to the media so all comments were given anonymously).

“The hospital was ravaged by flu last year – with multiple fatalities – so you would have imagined that we would have been ready for this year… but we weren’t,” said a consultant with over 25 years’ experience in UHW.  “We have empty beds that I can show you (pictures on this page), separate to the Dunmore Wing, but we can’t open them because we don’t have the staff. The situation here has become unbearably frustrating. We have just walked past an 80-year-old woman, laying on a trolley in a hospital corridor, when there are beds upstairs lying empty. Instead of hiring new beds in nursing homes – at a cost of €1,000 per bed – you’d have to wonder why agency nurses or HSE nurses weren’t recruited months in advance of winter time. There may be a recruitment ban in place but these are people’s lives we’re talking about.”

One of the porters responsible for moving patients from the Emergency Department was extremely critical of the managerial structures within the hospital.

“Last week they announced more people were on trolleys in Emergency Departments than ever before… they called it a national crisis,” the Porter said. “It’s hard to understand then, during a ‘crisis’, why there are so many fully trained nurses walking around the hospital with clipboards. There are 20 unused beds in Medical 4 Ward and a lot of people in this hospital would prefer to see these ‘bed managers’ get back into their nurse’s uniforms and get these beds open. These managers are doing jobs that care assistant secretaries are well capable of doing. How can it be allowed that in the biggest health crisis in years, up to 15 nurses are being taken off the wards and given clipboards, while elderly people are forced to sleep on trolleys for 24 hours or more? There are a lot of people angry about this.”

Sinn Fein TD David Cullinane said that the HSE have once again failed with their winter surge plans.

“UHW has 72 new single room isolation beds in the Dunmore Wing. Over 50 of these beds remain closed due to having no staff to run them. Hospital management receive funding to open 30 beds for two months to deal with the winter emergency. However, they cannot recruit staff quickly enough to open new beds at the hospital so instead hire 30 beds at a cost of €30k per week in a private nursing home. The lack of joined up thinking is staggering. And all the while, patients still languish on trolleys,” Deputy Cullinane said.

The Waterford News & Star asked UHW how many beds were currently empty/unused at UHW, and where those beds were located. They responded that “all funded inpatient beds were open and occupied. In addition, the hospital has eight surge beds open and occupied.” We then rephrased the question – “How many wards and beds in UHW are not currently in use and how long have they been closed for?”

No answer to that question was forthcoming.