AN air of disbelief was palpable inside Saint Nicholas’s Church in Carrick-on-Suir on Wednesday last as mourners assembled to bid farewell to John ‘Pot’ Butler (48), who lost his life in the early hours of Saturday, January 11.

A poem titled ‘My Dad’, written by Mr Butler’s devastated daughter Katilyn was read to the congregation by her aunt, Suzanne Kelly. In it, Katilyn thanked all who attended the Requiem Mass of Mr Butler, a resident of 44, Brown Street, Portlaw. “He was the best and he was mine and for that I am glad,” she wrote.

Throwing in some humorous quips about her father’s fashion sense, including his observations on fake tan, Katilyn added that John’s “muscle top, jeans and Kappa runners were really high end. Dad, I also must tell that your secret is out: I found your chocolates, snacks and crisps you wouldn’t even tell me about. My last words to you were: ‘I will see you later’ and whenever that day is, Dad, nothing will be greater. I know you will be close by us each day and each night and you will hit a bullseye each time a shooting star turns bright. Today I have to say goodbye, Dad and that burden is to all, so I ask you to look after me like you did when I was small. I’m sending my love to you, wherever you are, in God’s bookies, throwing darts or having a pint in God’s bar. I said it before and I’ll say it again. I will see you later, Dad, until we meet again. Love, Katilyn.”

Addressing family, friends and neighbours of Mr Butler, Father Jimmy Browne (Ballyneale) stated: “None of us ever know what any year is going to bring, or what any hour, day or moment is going to bring for any of us. And (at the turning of a New Year) none of us could have thought that we would be here today to celebrate John Butler’s Requiem Mass.”

Telling the congregation that he didn’t know John personally, Fr Browne said this had made him listen with particular care to those familiar with the deceased prior to the Obsequies.

“The tears that have been shed over the last number of days and those that will undoubtedly be shed in the days to come show the affection in which John was held by so many: a father, a brother, a son, an uncle, a friend, a best friend – and all the affection that’s tied up in those bonds.”

Fr Browne referred to a cookery course John (originally from Treacy Park, Carrick-on-Suir) had applied for in Carrick several years ago and one of the things he said to Martin (Coughlan, who ran the course) was: ‘I haven’t a car but I’ll do my best to be always there.’ Martin knew that John mightn’t always be able to get there since he’d be coming in from Portlaw but John never missed one of those days on the course. Never missed one. What does that say about him? It says that when John signed up for something, he really took it on and committed himself to it… and despite the effort that was involved in getting there, he always made sure he was there.”

Addressing Mr Butler’s family, Fr Browne said: “You just don’t get over something like this in the space of a day or a week. My father died in 1985, he smoked a pipe and used a tobacco called Clan. Well I was in town recently when I got a whiff of pipe smoke – I knew it was Clan – and immediately all the memories of my father came back. When you think you have everything sorted out, something springs forward and brings a memory of that person back and that’s the way it will be for you in the days that lie ahead.”

Delivering the eulogy, Margaret Butler described John as “a true gentleman who was always willing to help and get stuck in. His loving nature shone through in everything he did. He worked in the Dr Martin Day Care Centre (in Portlaw)… it was a job he loved dearly and it remained close to his heart.”

John Butler, who proudly hurled for the Carrick Davins club, approached life from a distinctive aspect, Ms Butler wryly noted. “He would hang his curtains inside out, so everyone walking past the house would see their design! John will be sadly missed by all who knew and loved him. He touched so many lives and in his death, many lives will be changed forever. Rest in peace, John.”

The readings at the Requiem Mass were delivered by Robert Butler and Heather Harris while the Prayers of the Faithful were offered by Lily Murphy, Tracey Walsh, Catherine Loughman and Liam Butler. The gifts were presented to Fr Browne by Louise Butler and Pauline Murphy. Soloist Andrea Ruth Houlihan was accompanied at the Mass by pianist Tony Egan.

During the presentation of symbols which marked John’s life, his brother Bisto brought forward a set of darts, a sport John played socially and competitively.

Burial at St Mary’s Cemetery in Carrickbeg immediately followed the Requiem Mass. John Butler was father of Katilyn and Stephen. He is survived by daughter Katilyn, father William, brothers Bisto, Eddie, Philip, Robert and Damien and was predeceased by his mother Peggy. May he Rest In Peace. 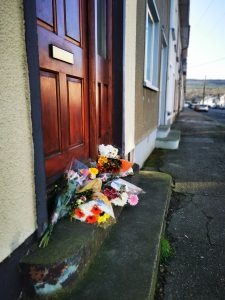 Flowers on the doorstep of the late John Butler’s home on Brown Street, Portlaw on Wednesday last, shortly after his Requiem Mass had been celebrated in his native Carrick-on-Suir.