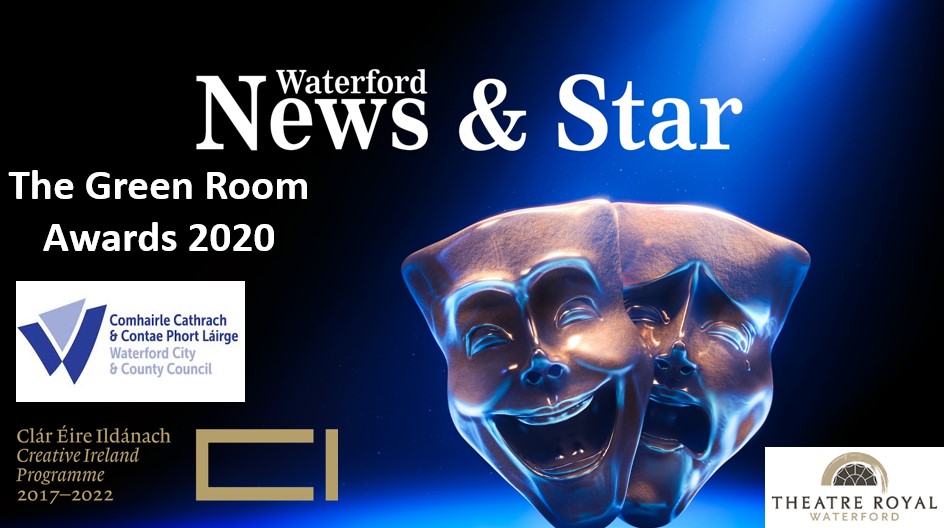 WE’RE under a week away from the inaugural Green Room Awards live ceremony, which take place in the Theatre Royal this Sunday night, February 2 at 8pm. The awards, which are the result of a year’s worth of reviews by Waterford News & Star arts reviewer Pat McEvoy, are always highly anticipated and this year, for the first time ever, nominees will be able to slip on their glad rags and celebrate their nominations – and wins – in style.

The evening kicks off in the vestibule of the Theatre Royal at 7pm on Sunday, with a Gin Reception hosted by the team behind Thin Gin and Muldoon – Anchor Spirits. They will be joined by the artistic geniuses behind Spraoi who will be providing a Selfie Station the like of which you have never seen before! There will also be live music from renowned local musicians Michelle Haberlin and Sylvia Dowdall.

Speaking about the night, Nichola Beresford of Anchor Spirits, said that they were delighted to be supporting the awards.

“Waterford has a huge and diverse arts scene and community and we can never put a high enough value on that for the whole population,” Nichola said. “The arts just can’t survive without patronage and so we’re delighted to support events that highlight groups and individuals involved in arts and entertainment. Timmy (Ryan) and I believe that the Green Room Awards shine a light on some of the great talent we have on our doorstep. We’re very pleased to be involved in some small way and are looking forward to the awards night on February 2 where we’ll be supporting the event by providing some complimentary drinks in the foyer of the Theatre Royal for those attending.”

As an added bonus on the night, Waterford News & Star staff photographer – the hugely well-known and respected Joe Evans – will host a very special exhibition, showcasing some of the faces from Waterford’s artistic past, particularly during the heyday of the Tops of the Town and the Waterford International Light Opera Festival.

In addition to Pat McEvoy’ Award Winners – over 30 awards covering hundreds of performances and roles from the past year in both the amateur and professional arts scene in Waterford – there is also a People’s Choice Award, which will be chosen by the public from an adjudicated Waterford Theatre/ Arts/ Entertainment Group of the Year shortlist. The adjudication panel for the shortlist – Pat McEvoy, Nichola Beresford, Mary O’Neill and Mary Boland – are representatives from the worlds of Waterford theatre and arts and Waterford media, with in depth knowledge of the vibrant Waterford arts and culture scene in our city and county.

Lastly, on the night a very special Lifetime Achievement award will be presented to an individual, chosen by our adjudication panel, who has provided an immense contribution to the arts and theatre scene in Waterford throughout their lifetime.

Vote for your choice in the Waterford Theatre/ Arts/ Entertainment Group of the Year – go to https://waterford-news.ie/waterfordnewsandstargreenroomawards/ Voting open until midnight, this Thursday, January 30th.

EDITORIAL: Waterford out in the permanent political cold