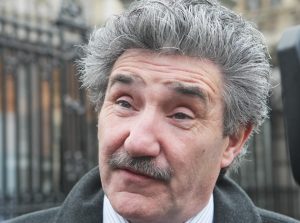 No matter who you are, and no matter what background you come from, as soon as you become a public representative, you’re handed a big target, which you are then obligated to afix to your back.

On the day I wrote this column, John Halligan retired from politics. He’s at this game a long time, and that in itself, is a bloody impressive achievement. He was first elected as a councillor in 1999, topping the poll on a number of occasions before being elected as a TD in 2011. He probably helped hundreds, if not thousands of people along the way, and no doubt pissed off the same amount of people.

There are a lot of things I don’t know about John, such as how good of a politician he actually was. I think the power he suddenly found himself possessing after he helped form the Independent Alliance was a bit of a shock for him. He was an experienced politician, but not in the big leagues. He was more of a Sunday League footballer who suddenly found himself in the Premier League. If he had been more humble, I think he would have retained the support that he had in Waterford throughout his time as a councillor. Instead, he promised the Sun, Moon and Stars. And when he discovered that the Sun, Moon and Stars were out of his reach, he doubled down and said that he would quit politics, and rain hell on the Government if his demands about 24/7 weren’t met. This is where John and I clashed. The only thing that I know for sure about Mr Halligan is that he had no time for me whatsoever. The reason being, I criticised him publicly. In the paper, on the radio, to his face. I didn’t like how he was issuing press releases for every little thing to do with 24/7 cardiac care, even though very little was actually happening at the time. I didn’t like how, when the mortuary story broke, he was the one who told the Taoiseach that the consultants were speaking out of turn. This was said as much, publicly by the Taoiseach’s office, which told me that Mr Varadkar wasn’t too happy with the path that Halligan led him down.

I’ll tell you a quick story about the relationship with John Halligan and I. A few years ago, he used Oireachtas Envelopes to send something or another to some of his constituents. I wasn’t particularly sure if he had broken a rule so I did what I would always do and rang him to get the answer from the horse’s mouth. He told me that he wasn’t sure either, but he was 90% positive that he hadn’t broken any rules. It was a Monday evening and there was enough doubt in my mind for me to not run the story. The next day, The Journal ran it instead and John rang me – apoplectic. He accused me of leaking the images of the envelopes to the Journal and then accused me of being a member of Sinn Fein. He said that he had seen me posting Sinn Fein propaganda on Facebook. This confused me, until I realised that what he had probably seen was me being tagged in a post by John Hearne or someone – you know the way these things appear on your page when you’re tagged. Anyway, I’m sure Sinn Fein members would get a good laugh out of the idea that I was a secret member of their party. Halligan told me that I was a poor journalist and that he would never speak to me professionally again.

On that occasion, he was wrong. I didn’t leak anything about him. In fact, such is my loyalty to the News & Star that it takes a lot for me to even sell one of my stories to a national paper. I didn’t hold that phone call against him though. I thought it was passionate, and showed that he cared enough to actually be offended by the idea that I would hang him out to dry like that.

As I sit here and reflect on his career in politics, I definitely think that he can leave with his head held high. He always stuck to his guns in terms of his, quite liberal, beliefs. He doesn’t believe in God and had no problem in saying that publicly. That’s not an easy thing to do when you’re a politician, especially when you consider that a recent American President who doesn’t believe in God had to pretend for the duration of his term in office.

Sticking to one’s guns is not as common as you think. Politicians like Simon Harris and Michael Martin were anti-abortion until they realised that the winds of favour were blowing in a different direction, so they changed direction too. When I think about John Halligan, there is no ambivalence about his beliefs and interests. No to religion. Yes to the right to choose what happens to your body, whether you want to abort a baby or end your own life early. Yes to poetry and possibly yes to aliens. Honestly, I think this is an admirable quality in a politician. It shows that your inherent belief system can’t be easily swayed. And finally, let’s call a spade a spade. With the recent granting of planning permission for the second cath lab, former Minister Halligan can retire knowing that one of the things that he set out to do – one of the things that he threatened Hell on the Government with, if not delivered, is finally in the pipeline. I’ll always keep our politicians to task when they’re in office, but consider this my handshake to Mr Halligan, with the best wishes of a long and happy retirement.