Well Said: Edwina O’Leary on a life without limits

THERE’S a gregarious matter of factness about Edwina O’Leary. A native of Blacknock, Kilmeaden, daughter of Eileen and John, sister of Brian and doting aunt to Cathal, Chloe and Phoebe, Edwina made for engaging, fun company – an ideal fit for this particular slot.

“I’m seven years older than Brian,” she tells me over a cup of tea in the Kazbar. “Then he came along and stole my thunder!”

Edwina was born with Spina Bifida (which literally means ‘split spine’), a condition which effects about one in every thousand births in Ireland.

“Spina Bifida has seven different levels and I have the most severe one – Myelomeningocele – which means I can’t walk and I’ve no sensation in most parts from my waist down,” she said.

“My parents were quite young themselves when I was born; my Dad was one of a huge family – there’s 11 of them – so when I was growing up, my parents kind of grew up with me so to speak. The fact that I had a disability didn’t really become a thing until I went to secondary school (in St Paul’s). I went to the same primary school as all my cousins in Ballyduff and the only additions made to the school at the time was when two small ramps were put in while I was in Fifth and Sixth Class. I did all the same subjects, everything my peers did.”

She told me: “Now I was out of school a lot. When I was eight, nine years old, I had rods inserted in my back so I was out for about three months because of that. Now I still had my work sent home to me so I didn’t get away with much. But there was always someone around home back then, sure I’d loads of aunts and uncles. Being at home was just something I had to get used to but I’ve always been sociable. I loved going to school and meeting my friends – it was during a time when we had really bad snow – so being at home and watching television all the time got a bit boring.”

Recalling the surgery, Edwina said: “It was very painful, I do remember that. I was on a Stryker Bed so the bed kind of ‘lies’ on top of you. You get the rods inserted into your back to straighten your spine and help with your breathing. I had a mattress and the bedclothes over me and then I was ‘flipped’ over by this big circular machine – it was like being in a washing machine – and I was flipped over every four or five hours. Those rods had to come out when I was 11 as they were starting to protrude through my skin. Now I had other surgeries, some when I was born and I had a lesion on my back closed too.”

With a slight grin, she adds: “I’ve never taken a step in my life but I sometimes laugh at people when I see them walk. I think walking is the weirdest thing, seriously! When I see people walking upstairs in a film, I break out in a sweat. And I can’t cope at all with people fighting on a stairs during a film. But in my dreams, I know what it’s like to walk. I can feel my footsteps on the ground. I know that probably sounds a bit strange.” I replied: “No, not at all. But how pleasant is it to experience that in a dream and, on the flipside, when you wake up after a dream like that, have you ever had that ‘Oh Christ’ feeling?”

Said Edwina: “It’s just strange, more than anything. In my subconscious I kind of know what it’s like to walk. But I’ve never considered having a disability to limit me when it comes to any part of my life. I’ve never thought that way so me not ever taking a physical step is just something else I don’t do… Now there are people who don’t want to have disabilities of different kinds and they don’t want to know too much about their disabilities and that’s alright but that’s not me. I’ve always wanted to know everything because if you don’t know something, you can’t face things as well; I don’t think you can make things better for yourself. That’s just what I think.”

Like most teenagers, Edwina did become more self-conscious of her appearance and she found that she didn’t share a lot of common hobbies with many of her St Paul’s classmates.

“Like I was never into the GAA – talk about being the black sheep of the family (the rest of the family are well-known Déise fanatics!) – I was more into winter sports. And because there was nobody else in a wheelchair in my year, there were times when I didn’t have someone to talk to. But that was normal teenage stuff. I was just like any other teenager and I never really felt that someone wouldn’t be interested in being friendly with me because I was in a wheelchair. Now a girl said to me one night when we were out: ‘You know it’s very fashionable to be friends with people in wheelchairs now’ and I shook her hand. I thought it was one of the funniest things I ever heard! But the experiences I had with certain people made me tough, it made me mouthy – not that I needed to be made mouthy. I was well able to do that myself.”

In her late teens, Edwina was unable to complete a post Leaving Cert secretarial course at St Paul’s following an accident with a hot water bottle. That led to three weeks in hospital in Cork, five months of convalescence at home and skin grafting, followed by further illnesses before she ultimately obtained six weeks of work experience at Waterford Institute of Technology (WIT). And she’s been there ever since.

“The lady who had been working on the switchboard at the time was going to another department and I was asked if I’d like her job. So I ended up on the switch there for 16 years and then two years ago, I moved into a job in Humanities and I love it. The people are so nice out there; I love the routine of it. You do get some curious questions from mammies at the other end of the phone. One asked me if he’d be getting served his breakfast at nine in the morning and another wanted to know if her 23-year-old son’s accommodation was on the same side of the road as the college, and I said, sure it depends where he wants to live. And she says back to me, in a Cavan accent, ‘well now, he wouldn’t be used to crossing big roads on his own’. She really said that to me!”

As well as being a heavy metal fan, Edwina (who has lived at the Waterford Cheshire development on John’s Hill since 2016) is an avid reader and the proud holder of an English degree via the Open University.

“I just love literature, theatre and the cinema. I spend hours reading a book or watching plays and films. I can’t get enough of them. I studied 18th century literature for my degree – Charlotte Bronte, Jane Austen – the wronged female! I read ‘Jane Eyre’ when I was in The Mater in my teens; I’d already read ‘Pride and Prejudice’ by then. And I just love the language, the way the characters spoke, the way they held themselves. I didn’t realise how repressed they were at the time. I was quite precocious at the time and I was reading them without context. I just love getting lost in a book. There’s a magic to it.”

Edwina doesn’t have a mission statement. She clearly doesn’t need one. “A lot of people tell me I’m brilliant, that I’m inspirational and all this,” she states, with our teapot well drained by then.

“I go off to work most days and I’m often wondering if I brushed my teeth that morning. How inspirational is that? I’m just getting on with my life as best I can and being myself. Sure that’s what most people do.” 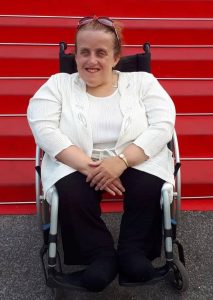 Edwina O’Leary pictured during a visit to Cannes in 2018. 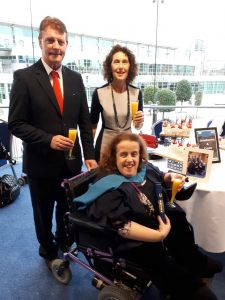 Edwina, pictured with parents John and Eileen (Blacknock, Kilmeaden) following her graduation in Belfast in 2017.