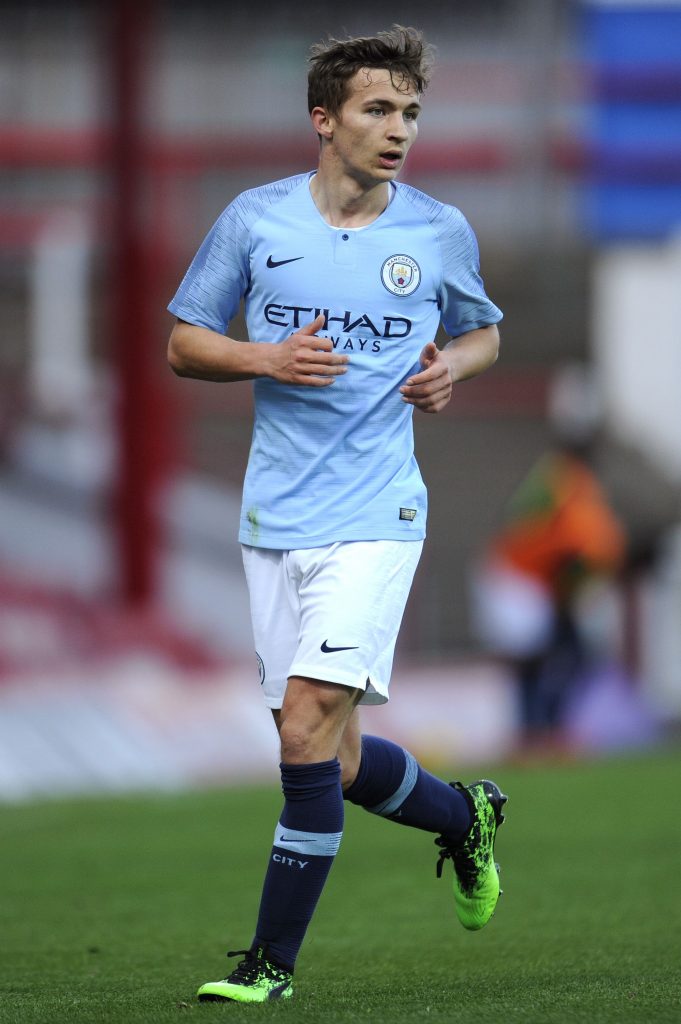 Tyreke Wilson in action for the Manchester City U-18 team. Photo: Getty Images.

With budgets cut ahead of the new SSE Airtricity Premier Division season for Waterford FC, it has to be said that manager Alan Reynolds, is doing well in the transfer market after convincing two talented youngsters to join the club until the end of the season.
The Blues boss said that he would be looking across the water in a bid to finalise his squad and he secured the signatures of two highly thought of players in Republic of Ireland U-21 International Tyreke Wilson and centre forward Matty Smith.
Wilson played with Manchester City and until recently trained with some of the top players at the Etihad where he will be a massive player at left-wing, while Smith joins from Scottish side Dundee United on the advice of Willo Flood.
There’s no doubting that the capture of Wilson is a big one from the Blues as the 20-year-old played with Cherry Orchard before making the move to Manchester City and has been capped at International level for Ireland at Under 17, 19 and 21 level. He missed Saturday’s friendly against Bray Wanderers through injury.
The Blues’ fans got a chance to see Matty Smith in action after the 22-year-old, who put pen to paper on Friday last, came on in the second half of Saturday’s win at the RSC and he showed glimpses of his ability with a decent show.

RUN OF GAMES
Speaking on signing for the new season, Tyreke Wilson said, “I’m hopefully of a good run of games at the RSC and I’m looking forward to playing regular first-team football. I’ve trained with the lads and there seems to be a good atmosphere in the dressing room.
“Everyone seems to be buzzing off one another here in Waterford, which is great to see, so it should be a good and exciting season. I’m an all-round fullback. I like to defend, but I’m always keen to push forward as well and try to get balls into the box. I’d base myself off Ashley Cole, so I’d like to play like him.
“As I said playing in a run of games is my aim if I’m honest and I’m looking forward to the challenge here and we’ll see where we go.”
Also commenting on his move to the RSC, striker Matty Smith said, “I’m glad to be here and looking forward to getting started. I know Scotty and Ali and I’ve heard good things about the club. They’ve had good things to say about the team and the club as a whole.
“Hopefully I’ll be able to score plenty of goals here. I’m a very attacking-minded player. Hopefully, I can bring plenty of enjoyment to the fans while I’m here. I’ve been out with injuries, so it’s good for me to have pre-season to work through. It gives me a chance to get fit for the start of the season.”