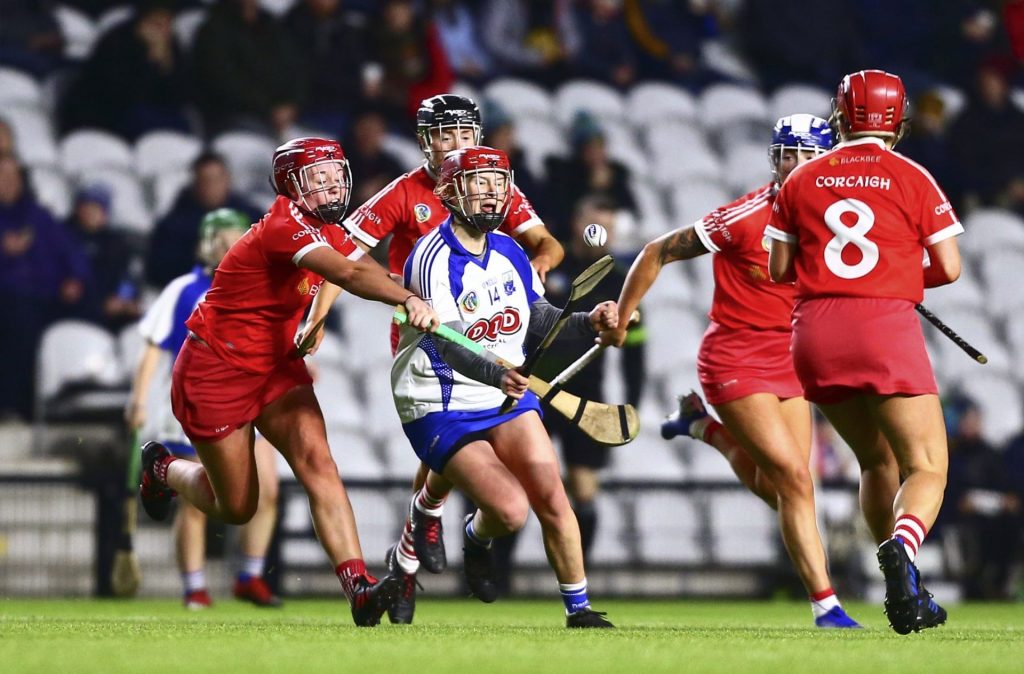 Fergal O’Brien’s Waterford Senior Camogie side had to settle for second best at Pairc Ui Chaoimh on Saturday evening in the opening round of games in this year’s National Camogie League, running out victors with ten points to spare at the end of an entertaining hours action.
The home side lined out without the likes of Aoife Murray, Gemma O’Connor. Orla Cotter, Julia Whyte and the Mackey sisters all regulars in the red and white shirt in recent years, while Waterford fielded without any member of the Gailltír club as they prepare for their All-Ireland Final appearance against St Rynagh’s from Offaly in Croke Park in the coming weeks.

LOTS TO BE LEARNED
While all involved with the Waterford set up will be somewhat disappointed with the ten point loss in this game, the management team will take much from this game. Waterford created a number of good goal scoring chances which on another day at least one would have come off, while the Waterford attackers saw a number of chances fall into the hand of Amy Lee in the Cork goal or went just wide of the uprights.
It was Fergal O’Brien’s side that started this game the brighter of the two sides as Beth Carton knocked over two early points inside the opening two minutes of the throw in – the first from a free. Waterford had a good chance of a goal on two minutes. Caoimhe McGrath who earlier in the day played with the Waterford Senior Footballers in their loss to Donegal at Fraher Field saw her effort cutting in from the main stand as she attacked the Blackrock end of the ground come crashing off the crossbar and when the rebound fell to Orla Hickey she saw her effort go just wide of Amy Lee’s post.
That chance proved to be a wakeup call for the home side. Orla Cronin and Aisling Thompson pointed to level matters with five minutes played.

GAME’S ONLY GOAL
The game’s only goal came on six minutes. A long free from Chloe Sigerson looked to be going wide but it was kept in by Saoirse McCarthy. She worked the ball into the danger zone in front of the Waterford goal and when Linda Collins was able to take it out of a ruck, she managed to find Saoirse McCarthy who gave Brianna O’Regan no chance with a well placed shot.
Orla Cronin helped put Cork in front by four on ten minutes but almost straight away Beth Carton cancelled out the Enniskeane club player’s effort with a fine free struck from distance.
Hannah Looney extended Cork’s lead on 11 minutes. From the restart Waterford went up field. Beth Carton shot from the river side of the field but lady luck was not with her as she saw her effort come crashing off the crossbar. The rebound made its way out to Caoimhe McGrath who’s effort was blocked down and went out for a ’45 from with Beth Carton made no mistake in splitting the Cork uprights.
Cliona Healy, Orla Cronin and Ashling Thompson followed up with scores for the home side putting them 1-7 to 0-4 up with 22 minutes played. Aisling Power got her name on the score sheet with a good score before Beth Carton again split the posts from play on 24 minutes leaving just four between the sides.
Linda Collins extended the Rebellettes lead on 26 but Waterford refused to bow down to the Cork pressure. Shona Curran hit a long range free which was broken down by her Lismore club mate Catriona McGlone and fell to team captain Niamh Rockett but the St Anne’s player saw her effort go just wide.

FVE IN IT AT THE BREAK
Another converted free from Orla Cronin put Cork 1-9 to 0-6 up with the thirty allotted minutes also up, but there was three added minutes to be added which was stretched to four. Waterford in this time outscored the home side as Niamh Rockett and Beth Carton from a free both landed scores with Cliona Healy landing one for the home side in between which gave them a 1-10 to 0-8 lead at the break.
Scoring in the second half was not as plentiful but still both sides created their share of chances. Linda McCarthy opened the scoring within sixty seconds of the restart and the same player extended the home sides lead a minute later when she converted a 45 when Brianna O’Regan was adjudged to have come outside the box when restarting the game, and when Saoirse McCarthy pointed on 34 minutes Cork were in a strong position leading 1-13 to 0-8.
Beth Carton put over Waterford’s first score of the second half on 36 minutes and followed it up with another three minutes later. Lauren Homan got her name on the score sheet on 41 minutes to put her side 1-14 to 0-10 in front.
Waterford still refused to panic and on 47 minutes another good chance was created. Caoimhe McGrath played a ball in towards the right hand post as she looked in a the city end of the ground which looked to be going wide.
Orla Hickey threw herself at the ball stretching out her Hurley in a bid to get a touch on the ball and to put it past Amy Lee but the initial effort by Caoimhe McGrath had just a little too much on it for her.

HOME SIDE ON TOP
Orla Cronin pointed for the home side before Waterford won a 20 metre free eight minutes from time. Beth Carton went for goal from her effort but she saw her effort kept out by the Cork backs. Chloe Sigerson put Cork 1-16 to 0-10 in front with five minutes to play, but her effort was quickly cancelled out when Beth Carton put over a 45.
Orla Cronin put overt two quick scores for Cork just as the hour was about to elapse but Waterford still were not throwing in the towel. Niamh Rockett had an effort saved by Amy Lee in added time at the end of the hour and soon afterwards Beth Carton for her tenth score of the evening with another converted free.
Cork however knowing that score difference could well prove to be very important at the end of the campaign hit the last score of the game when Amy O’Connor became the sixth starting forward for the Rebellettes to get her name on the scoresheet.