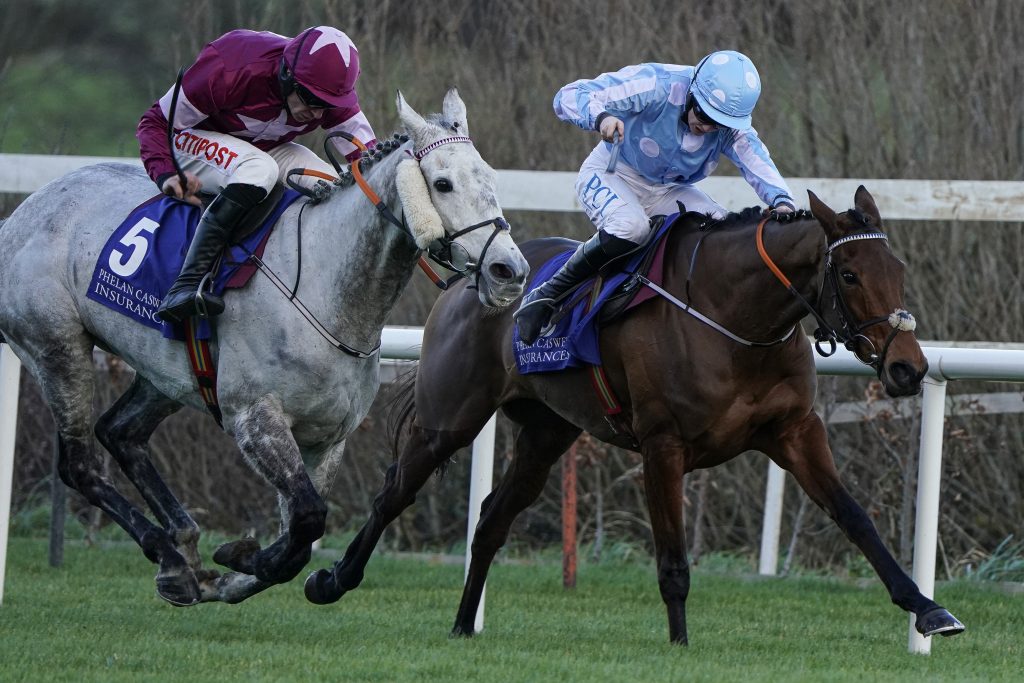 It was a brilliant weekend for Waterford horses and their trainers at the Dublin Racing Festival (DRF) at Leopardstown. On Saturday Henry de Bromhead bagged a brilliant Grade One double, while on Sunday Robert Widger sent out Treacysenniscorthy to win for the fourth time on the bounce.
The star of the show though on Saturday was definitely wonder-mare Honeysuckle who justified strong support in the maket to win the PCI Irish Champion Hurdle at 8/11.
The six year old is now unbeaten from her seven career starts between the rails and now looks like a live champion hurdle contender. She had to dig deep however to fend off stablemate Petit Mouchoir and Darver Star.
“She just looked like she got a bit lonely going to the last. She’s so tough and the lady on top of her is so tough. She really battled it out,” said de Bromhead.
“All credit to Petit Mouchoir and Davy Russell, he ran a brilliant race again and Gavin’s horse looked very good. I had my heart in my mouth coming to the line. She probably needed it and our two went at it fairly early.
“Talk about adapting to two miles, she seemed brilliant. I thought she jumped well to be fair, maybe at the second Patrick jumped past her. At the second last I’m not sure if Rachael sat on her and Davy go a good jump or if she make a mistake. I think she was just lonely in front at the last.”
“Rachael is brilliant and I always say that we are very lucky to have her. She’s just riding out of her skin and the mare is deadly.”
When asked where she would go from here he added:- “We’ll enjoy today. We’ve won PCI Irish Champion Hurdle and we can discuss all that in time. I’m delighted to get today behind us. We’re very lucky to have these horses and get supported by great clients and we have a great team around us.”
Betfair clipped the winner into 5/1 from 6/1 for the Champion Hurdle while Boylesports are 4/1 (non-runner no bet). 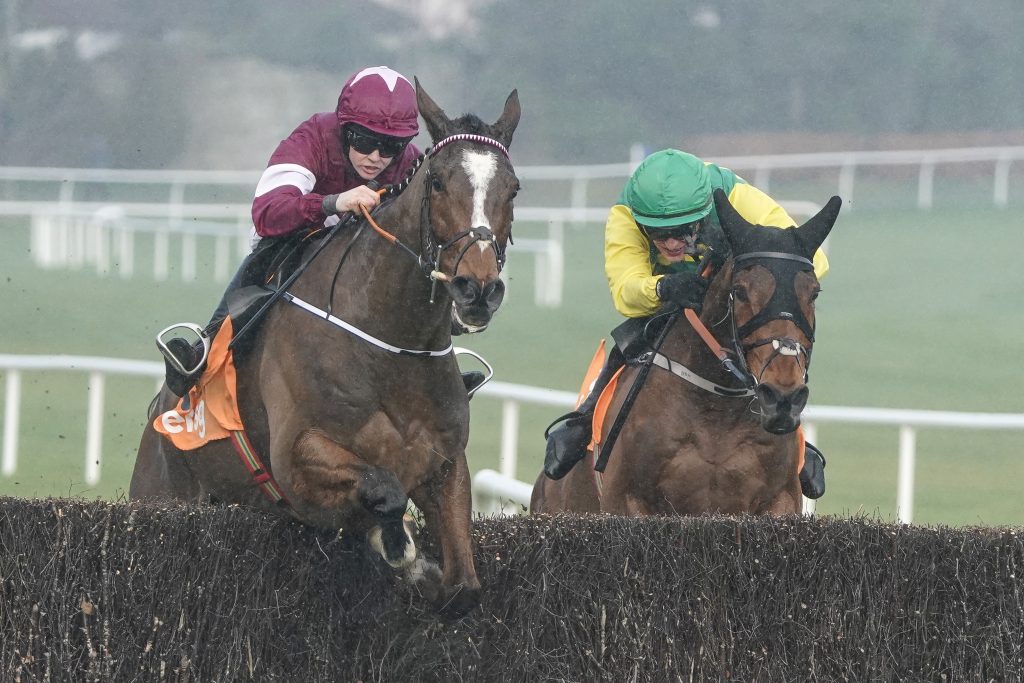 ONE FOR THE NOTEBOOK
Henry and Rachael’s first Grade One winner on Saturday was Notebook who dug deep to see off Willie Mullins’ Cash Back in the ERSG Arkle Chase.
The 5/4 favourite was recording a Grade 1 double at the track having also taking the Racing Post Novice Chase at Christmas.
“He had to tough it out and he jumped brilliant. Cash Back gave us some race there,” said de Bromhead. “I didn’t think he jumped to his right as much as at Christmas, he was very good today. A few of ours have improved a lot over fences through the years. Special Tiara was a 116 hurdler and Ordinary was 118. Some of them need a fence and you saw his jumping out there, he’s a dream and he just seems to love it. Also I was running him over the wrong trip for most of last year!
“He’ll go straight to the Arkle and fingers crossed we get a clear run. He seems to have won on everything but he’s probably marginally better on better ground. It was a super ride from Rachael and some race, lucky we came out on top. We’ve five weeks now so we’ll freshen him up and try and have him as right as we can.”
Boylesports shortened the winner into 5/2 from 7/2 for the Arkle at Cheltenham while Betfair are 10/3 from 4/1. 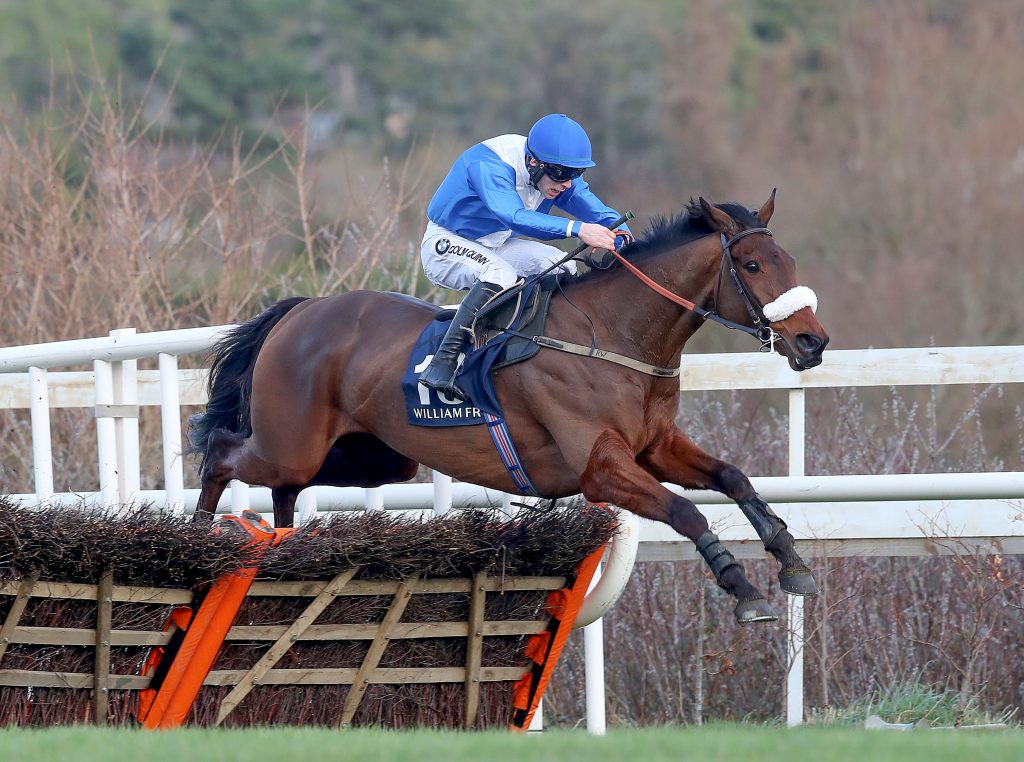 WHAT A HORSE
One of the horses of the season has surely been Treacysenniscorthy, who is trained in Waterford by former jockey Robert Widger, who only has a handful of horses in training.
On Sunday he beat off 27 rivals from the front to win the William Fry Handicap Hurdle at odds of 8/1.
This horse ran for the first time for new trainer Widger last September and since he joined the yard he has run seven times, winning five with a third and a fifth thrown in for good measure. The first of those wins was at 50/1 at the Listowel Festival and his last two wins were both at Leopardstown, at the Christmas Festival and again on Sunday, ridden by Kevin Brouder.
Widger said, “There’s plenty of us have come to follow him today so it’s a great day. To even have a runner up here at a meeting like this, for a small stable, is phenomenal. To come here with a chance and then win is what you dream of.
“He’s a chaser, that is what he is. He won a novice chase and we decided to go back over hurdles and try and win a hurdle with him. He just kept improving and that’s why we’ve kept him over hurdles.
“We’ll have a look at Cheltenham but the handicapper will have his say now so we’ll have to see if he puts him up too much.”