A wide and varied election debate

BEFORE an engaged WIT audience, in addition to 5,000 online viewers, 10 of the 11 Waterford Dáil candidates addressed a range of issues on Thursday last, including health, the economy, education, housing, the environment and local government.

Fianna Fáil’s Mary Butler re-iterated her party’s commitment to 24/7 cardiac care should they form part of the next government.

Referring to an update she’d received earlier that day from the South/South West Hospital Group, the detailed design for the second cath lab was currently in train, will go to tender in April, with construction (set to take 10 to 12 months) due to commence in June. “That is progress, whether we like it or not.”

Addressing the insurance-related problems being experienced by many, People Before Profit’s Una Dunphy described the activities of some companies as “extortionate”.

“Claims have come down but (the insurance companies) are still saying that this is justifying them putting up costs for everybody. What we need to tackle the companies… if it’s absolutely legal and necessary for people to have third party fire and theft, it should be provided by a national insurance company, like they do in Canada, and if you want further insurance, you get it them from the commercial interests and that will quickly bring (premia) back down.”

Independent candidate Bernadette Phillips suggested that Waterford Institute of Technology should adopt a standalone policy in pursuing an upgrade to university status. “I would also be challenging the Technological University side of it; I think we need to be calling it a University of Waterford as we do everywhere else around the country. I think it’s absolutely paramount that we begin to talk that up and that we begin to attract top businesses because they both go together.”

Fine Gael’s Damien Geoghegan said he disagreed with his party’s decision to dissolve Town Councils in 2014 and rejected the claim that smaller council bodies were ‘talking shops’ which carried precious little authority.

“When the Town Council was abolished and the Councils here were merged, the rates that were being levied on the business community in Dungarvan were actually 20 per cent lower than what they were in the city. That’s because the Council was being run in a very effective and efficient manner. I think the reforms of 2014 did not serve the public well. We are actually one of the most (politically) under-represented countries in Europe – we’re second last only to the UK.”

Sinn Féin’s David Cullinane was the only candidate not in situ at Carriganore due to a ‘Prime Time’ appearance in Limerick that evening. 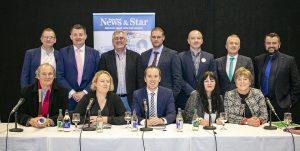