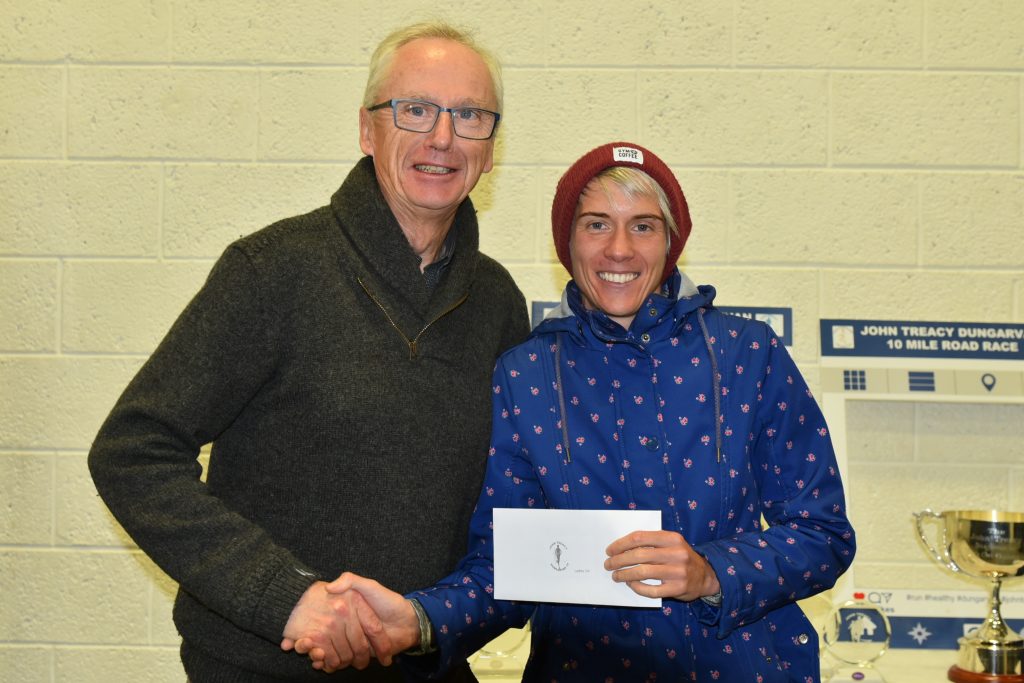 2550 completed the 29th Annual John Treacy 10 miles in Dungarvan on Sunday and two new course records were set both male and female. The record holder in the men’s section Mick Clohessy Raheny Shamrocks Dublin beat his old mark by two seconds in coming home first on Sunday in 48 minutes and 16 seconds, in second place came Kevin Maunsell Clonmel in 48 30 and Conor Duffy Glassnough Hrs Monaghan was third in 50.07. First Waterford man to finish was Pat Hennessy West Waterford in sixth place in 51.18.
The ladies old record was smashed on Sunday by National Marathon Champion Aoife Cooke Togher Cork who clocked 54 minutes 23 seconds, Siobhan Mc Mahon Dundrum Sth Dublin was second in 59.16 and Fiona Santry East Cork was third in 60.18,Adele Walsh St Senan’s was 6th in 61.46.and first Waterford finisher was Liz Nyhan West Waterford in 13th place in 66.51.Category winners from the local area were Joe Gough West Waterford o 65 in a great time of 64.36 Siobhan Kennedy Focus on Fitness o 55 in 69.27 and Terri Gough West Waterford 075.
A presentation of a cheque for €5000  to Concern was made after the race. Like all such races it was a big undertaking by West Waterford with preparations beginning month’s ago and going on right up to last person to finish but with the help of the Gardai Ambulance Units and many Voluntary bodies and volunteers it went off well. 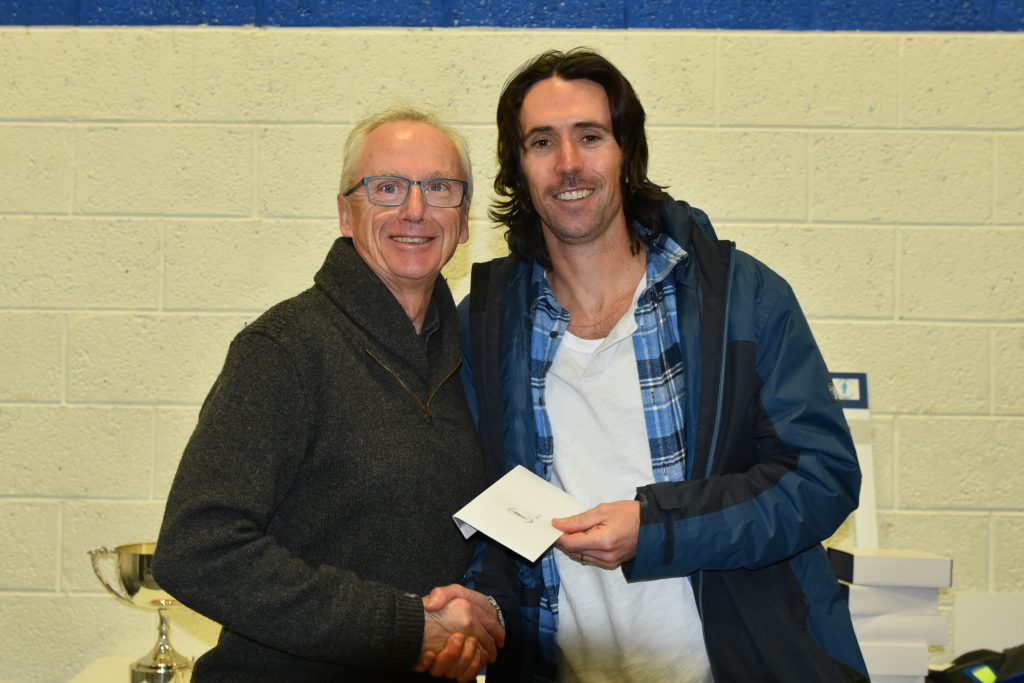 AAI Indoor Games i
On Sunday next with a 12.30 pm start the AAI Senior Indoor Games are in the National Indoor Centre in Abbotstown in Co Dublin  and there will be a few Waterford athletes competing there

Anne Valley 5 miles Challenge
Dunhill is the venue on Saturday next for the Annual Anne Valley 5 miles Run and it starts at 12 noon with entries in Harney’s in Dunhill from 9am up to 11.30 am. The main run will be preceded at 11.55 am by a children’s short race and there will also be a three miles walk starting at 11am entries again in Harney’s. 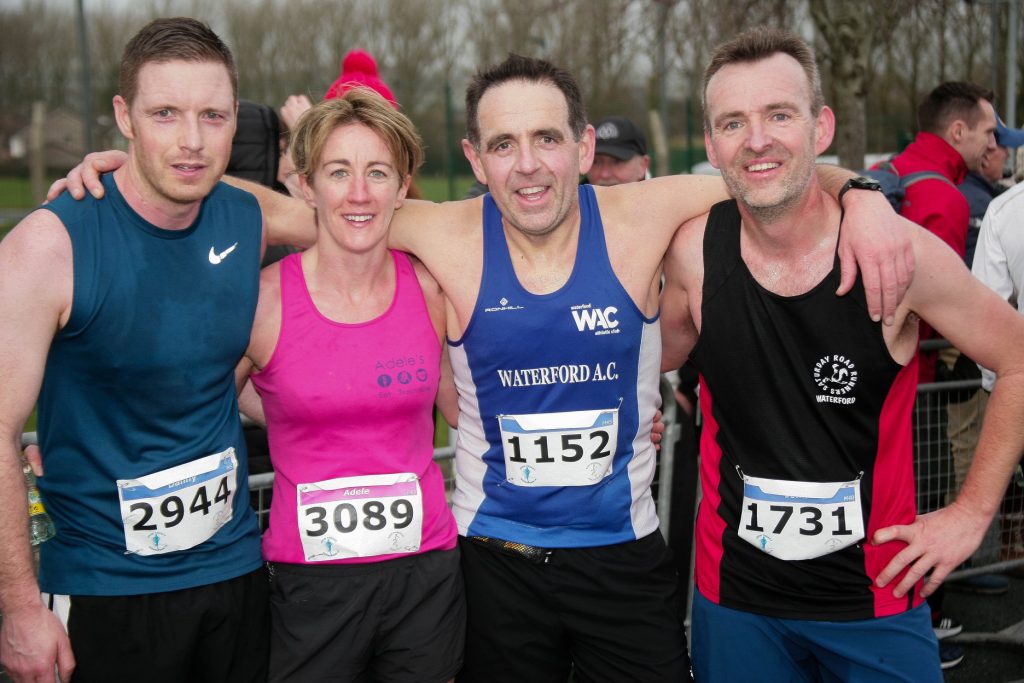 Some the huge contingent of Waterford athletes in the field for Sunday’s John Treacy Dungarvan 10 were: Danny Shanahan, Edele Walsh, John Byrne and John Guiry.

National Cross Country
Avondale near Rathdrum in County Wicklow is the venue on Saturday next for the All Ireland Intermediate and Master’s Cross Country Championships as well as the B Juvenile Championships boys and girls, u11,13,15,17and Juvenile Cross Country relays u12 and u14 (4x 500m), first event 11.30 am. Coming up on Wednesday evening February 12th is the AIT International Indoor Games are in AIT Athlone and Thomas Barr will have his only run of the Indoor season.

Munster Athletics Banquet
In the Tower Hotel in the City on Saturday last the Munster Star Awards Banquet took place and it was a very enjoyable event superbly organised by the Waterford Athletic Board with around 160 present .Athletes from the six Munster Counties young and not so young were presented with awards for their performances during 2019.The President of Athletics Ireland Georgina Drumm assisted by John McGrath Chair of Waterford Co Board and Esther Secretary of Munster Council made the presentations. The Waterford  recipients were Juvenile Track and Field Emily O’Mahony and Aidan Burke and Cross Country Lucy Holmes West Waterford ,Joe Gough also West Waterford got an International Award after a superb unbeaten season in Master’s Athletics European and World, Waterford AC took the Senior/Junior Indoor Club Award and Fintan Walsh Waterford AC got a Hall of Fame Award.