PORTLAW Musical Society’s 40th pantomime, ‘Cinderella’, runs at the Premier Hall from tonight through to Sunday and another week of high jinks is guaranteed by the banks of the Clodiagh.

“We knew we had the talent in Portlaw to put on something like a pantomime,” Society Life President and founding member Freddie Laffan told the Waterford News & Star.

“So getting all the streets together after the ‘Tops of the Streets’ finished up was the next thing. But we did, and here we are now, about to put on our 40th panto. Sure you’d have to be proud of that, and it’s something the whole town should be proud of, because nearly every family in Portlaw has made some contribution going all the way back to ‘Cinderella’, our first panto back in 1981.”

That the Society has returned to ‘Cinderella’ for its diamond jubilee production is entirely appropriate. The spring show in the Premier Hall has proven a welcome constant in the village throughout several economic and political upheavals and this week’s show will provide a welcome respite from the election babble of recent weeks.

Be it the prospect of cadet orange, ‘flogs’ and crisps back in our own early panto-going years or the prospect of a selfie with Cinders for the wide-eyed boys and girls who will relish every second of stage action in the coming days, Panto Week remains special in Portlaw.

“I’d say everyone in the village, at some stage, has been involved in the pantomime,” said Freddie. “It might be the thing that most people in Portlaw have had in common over the years; after all we’re not all members of the GAA Club, we’re not all involved with the Soccer Club, people don’t go to Mass in the numbers they used to and not all of us go for a drink either. But the pantomime is something that brought a lot of us together – it still does – and to have got as far as the 40th production is just brilliant.”

When one considers that only De La Salle College’s annual musical (first held in 1979) represents a longer unbroken run of production than the Portlaw Panto across the city and county, it’s clear that the Society has much to be proud of.

‘Cinderella’ kicks off tonight and will also run on Friday and Saturday night at 8pm, as well as on Sunday next at 3pm. 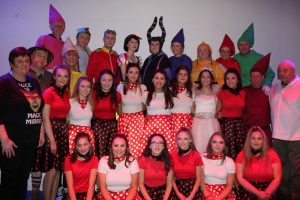 The cast of Portlaw Musical Society’s 2019 production of ‘Snow White and The Seven Dwarfs’. 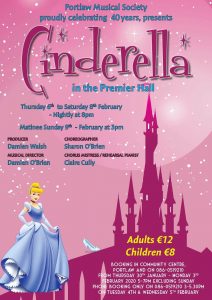