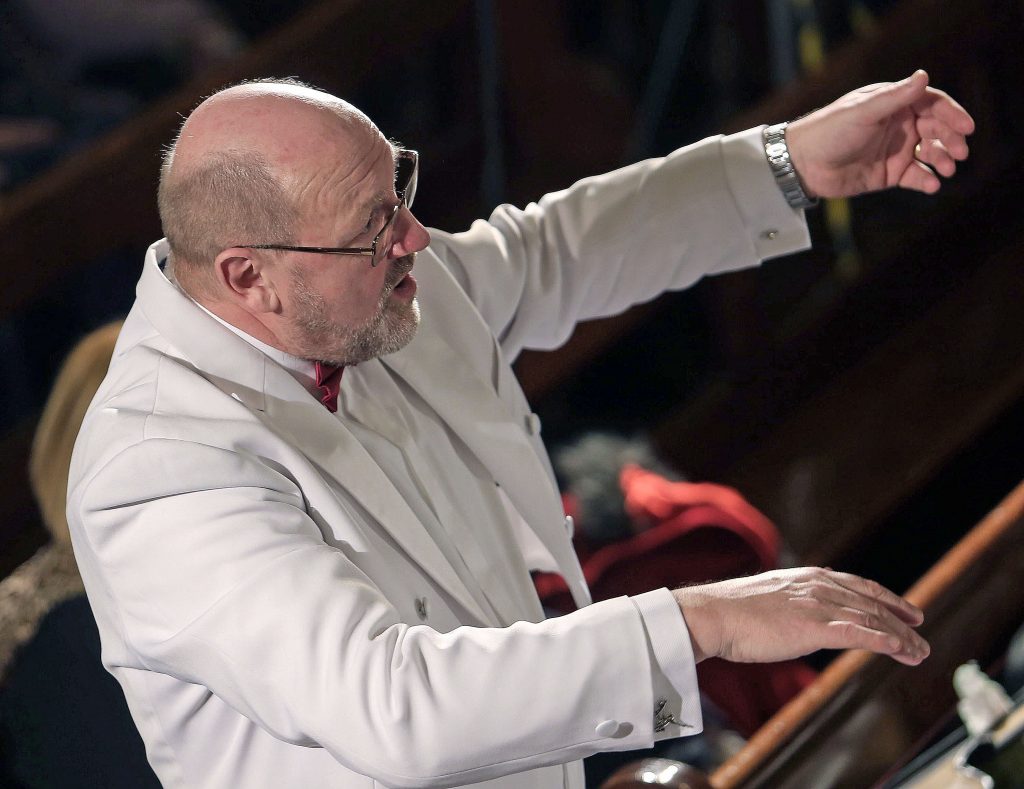 ‘Well that has to be the happiest requiem I’ve ever heard’ declared a beaming Madrigallery fan to me as the last chords sounded in American composer Dan Forrest’s Requiem for the Living to a packed Christ Church. It’s an ironic re-working on the traditional liturgical meaning of the Requiem which is a mass for the dead. And the composer makes you wonder at the purpose of the work as all the component parts of the mass are there – Introit and Kyrie, Agnus Dei, Sanctus and Lux Aeterna – along with a magnificent harsh and vibrant Vanitas Vanitatum that warns of the brevity of life and the pointlessness of the pursuit of pleasure.

Forrest’s take on the Requiem, however, moves beyond the traditional notion of giving emotional and spiritual support to the living and searches for a way for modern man and woman to be at peace with a world that constantly presents challenges and disillusionment. Forrest searches for a way to find hope in despair and a path to inner peace in a world that constantly disillusions us in a requiem for the those of us still above the ground.

‘Forrest’s score is a gem and Madrigallery’s performance of it is a joy. There’s a feeling of endless sound throughout as if the singing never actually stops’

Although sung entirely in Latin, one phrase in English sung by excellent tenor Micheál Griffin ‘Come unto me all ye who labour and are heavy laden and I will give you rest’ emphasises why exactly this is a Requiem for the Living.

Forrest’s score is a gem and Madrigallery’s performance of it is a joy. There’s a feeling of endless sound throughout as if the singing never actually stops – an effect that only a choir working in layered entries and phrases could achieve – and the barely audible whisper that opens and closes the Requiem is a metaphysical experience of peace and reverence. And a big shout out to Soprano Louise O’Carroll, Mezzo Jean Hubbard and Tenor Micheál Griffin for some fine solos.

The five movements work through a complex response of emotional moods from quiet and contemplative through painful despair and finally drives us on to understand a purpose to suffering with the promise of eternal salvation. Heady stuff?  Well…yes…and no. Because this performance is never over-heavy on the philosophy. It’s tuneful, melodic, interesting and emotionally manipulative as it brings us from anxiety through fear onto inner peace and happiness.

And Madrigallery’s singing of it is hypnotic. From that initial whispered entry, we’re hooked because the music never pauses and the sound carries the emotions. It’s lush and melodic with a soaring soprano line. The seemingly never-ending haunting cries and alarming despair of the Vanitas Vanitatum…’let the day perish wherein I was born’ segues into a humble plea for forgiveness in the Agnus Dei. Forrest’s ‘Sanctus’ (apparently inspired by shots of the blue-and-white earth taken from the Hubble Space Telescope) opens like a hymn and develops through endless waves of sound into a declaration of sheer joy. And the Latin text adds to the musicality of the piece.

The first half of the concert featured new work Eric Sweeney. A very special ‘Magnificat’ carried all the weight of faith and that Biblical ironic turn of phrase where the meek are exalted and the rich are sent empty away. A ‘New Year Carol’ from the pen of Benjamin Britten exchanges a mournful farewell to the old with a belief that ‘the New Year will be replete with water and wine and bugles that do shine.’

There’s trademark Madrigallery in William Byrd’s ‘Sing Joyfully’ with melodies and lines doing the rounds while new Christ Church Organist Simon Harden announced his arrival on the Waterford arts scene with a delicious Bach Prelude that has the crowd on its feet.

It’s time to bring back the Latin mass!