Fianna Fáil TD Mary Butler has suggested that her running on a standalone basis might have served the party better in this general election.

“When that decision was made, we were trying to be ambitious for the party,” said the Portlaw-based TD, who won 6,644 first preferences, a significant drop from her 2016 numbers which came to 10,603.

“We were trying to be ambitious for Micheál Martin, we want Micheál Martin to be Taoiseach and the only way you can do that is to win the most possible seats. There wasn’t a constituency that Fianna Fáil, even in a three-seater constituency, that Fianna Fáil didn’t have two candidates. At the time I did voice my concerns; I feel that sometimes when you’re putting on a second candidate meant we might split the vote and you could cancel each other out and we’re actually seeing a little bit of that throughout the country now.”

However, the likelihood remains that Mary Butler will transfer strongly from Eddie Mulligan upon his elimination from the race. “I’d be hoping that I’d see a sizeable figure from David Cullinane’s surplus; I’d say there’ll be a lot of ‘plumpers’ as well – just one votes – as a lot of people vote like that as well. I’d imagine I’d get a sizeable transfer from the Aontú candidate (Ronan Cleary)…but I’m hopeful that I’ve done enough to secure the second or third seat.” 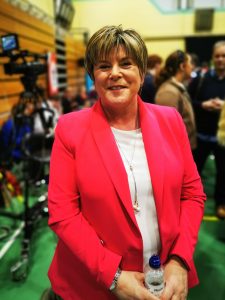 Mary Butler (FF) pictured shortly after arriving at the Count Centre this evening.