Fianna Fáil’s Eddie Mulligan said he is ‘delighted’ to have won the faith of 2,654 Waterfordians who offered their first preference to him in yesterday’s General Election.

“Overall, when it’s combined with Mary Butler’s vote, that brings us to in and around 18 per cent,” Cllr Mulligan told the Waterford News & Star.

“I think people always knew that for me, being selected as an additional candidate that I was always going to be looking at second seat for Fianna Fáil and we certainly had the ambition to go out and look for that second seat. But obviously today the important thing is to protect that one seat and for me, looking across the vote I have to compliment David Cullinane. He has swept the board right across the county and within the city centre, Waterford City East and Waterford City South where I would consider myself strong relatively; I think David hoovered up the votes there.”

The great unknown of where the surplus of the poll topper’s vote may divvy out shall prove telling, Cllr Mulligan told this newspaper: “I haven’t reviewed any of the tallying coming in but I feel myself that you’ll have the solid Sinn Féin vote which mightn’t go beyond one or maybe two if they extended support to another left wing candidate. In relation to the rest of the votes, I think it will break down pro rata. I think people may have voted for Sinn Féin in a protest vote and then gone back to their regular party or independent choice after that. I suppose, really, the dispersion of that surplus will reveal a lot when the time comes.” 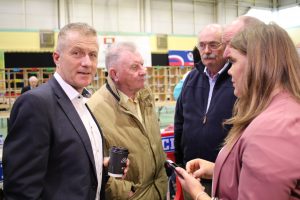