Maurice Cummins: the tide was against Fine Gael

“After that then, the surplus could propel people who are way down into third or fourth place,” a prediction which didn’t prove too far off the mark given Una Dunphy’s (PBP) strong second count showing.

“But the extra 200 or 300 that candidates ahead of her are likely to pick up, they’re going to be vital when it comes to it as well. And the sequencing of people going out: if, for instance, John Pratt is eliminated, it will give Damien Geoghegan a very good chance. If Damien Geoghegan goes out before John Pratt, the way things will go after the surplus has been distributed will be interesting. But right now, nobody can be too sure on that front so the sequence of elimination is going to tell an awful lot. So I would say that Matt Shanahan and Marc O’Cathasaigh (GP) should definitely in with a shout and you never know, Fine Gael may well be fighting it out with for the fourth seat.”

When asked about how Senator Paudie Coffey would have fared had he remained on the ticket, Maurice Cummins stated: “I’d say, even under the circumstances at the moment, he probably would have polled between 6,000 and 7,000 votes; I see no reason why he wouldn’t have got at least 6,000.”

Describing Senator Coffey’s withdrawal from the FG ticket as “a big blow”, Mr Cummins told the Waterford News & Star: “We had two new candidates in the field but we’ve had a massive drop in vote at the same time. We’re getting about 8,000 votes where we would have got about 15,000 the last time. Now Matt Shanahan took a lot of Fine Gael votes in the mid-county and in parts of the city as well and he took at least 2,000 votes in the Comeragh Area. We dropped about a thousand votes in Portlaw and around that area as well obviously due to Paudie not being in the field but also down to the fact that Shanahan has many relations and contacts within Fine Gael that would have supported him so that would have been an explanation for dropping a thousand, maybe even two thousand votes. But the tide was against us from the very beginning and I think we’ll do well if we hold our seat and that’s not sure at the present time.”

Regarding the prospect of any defeated Fine Gael candidate standing in the pending Seanad Election deadline of February 14, Mr Cummins said: “John (his son) has said to me that he has no interest whatsoever in the Seanad going forward; if he changes his mind afterwards or not, I don’t know but that’s his opinion at the present time. It’s an awful lot of work; you’ve got to travel throughout the 26 counties and go up and down every boreen in the country. I did it on four occasions and I’ll not be going again myself, I can assure you of that but I don’t think John is interested. I would say if Damien Geoghegan loses out that he would definitely be a candidate for the Seanad because he was President of the (AILG) Association of Irish Local Government and I’d be quite confident that Damien would be elected if he decides to go down that route.”

Maurice Cummins also congratulated poll topper David Cullinane (SF) on “an extraordinary result. It’s a tremendous vote for him. His surplus is probably going to dictate where the last two seats are going to go. We’ll see.” 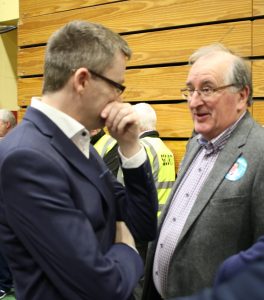