POLL-TOPPING TD David Cullinane said his closing comments at a party celebration following his election on Sunday night were ‘reflecting back on a very emotional period in Republican history’.

In an interview with WLR’s ‘Deise Today’ programme, Deputy Cullinane stated: “Obviously it would have been better had I not said it, let’s be honest. It will be sensationalised by some; people will make more of it than it actually is. People have all their own opinions and I can’t form an opinion for somebody else.”

At a post-election celebration on Sunday night, Deputy Cullinane addressed party supporters in a speech that was recorded and posted on social media.

“I was too young to remember it but I heard of people in this room who canvassed for Kevin Lynch in 1981, one of the hunger strikers,” he said.

“And when he first embarked on a hunger strike with Bobby Sands and all of those comrades, he was the H-Block candidate in this constituency. And what a fantastic moment it must be if his family are watching on and people in the North are watching on to see Sinn Féin get over 20,000 first preference votes in the constituency that Kevin Lynch stood in.”

In a comment to the Waterford News & Star prior to our print deadline, Deputy Cullinane said: “I’m a Republican. I’ve never distanced myself nor have I ever felt the need to make any apologies when it comes to my position on the nature of the conflict in the North.”

He later told The Irish Times: “We are a united Ireland party and we have never distanced ourselves from that. I do not agree with everything that the IRA did but I would not distance myself from it.”

“I won’t be distracted by anything.”

Speaking to Damien Tiernan this morning, David Cullinane stated: “What I can say is that people know me. They know what I’m about. They know that I am somebody who is focused on the future. They know that my singular sole focus here will be on what I can do for the people who elected me in Waterford and the big mandate that I got. I won’t be distracted by anything other than getting the best that I possibly can for Waterford.”

Addressing the issue last night, Sinn Féin President Mary Lou McDonald stated: “I’ve asked everybody not to be making throwaway comments or comments that can be misconstrued or distract us from the work ahead, and I know that’s what happened in David’s case.”

Deputy Cullinane said his comments were borne out of “exuberance, it was a celebration night, it was emotional, it was all of that…and the reference to Kevin Lynch specifically was because of his (1981) election candidacy in Waterford. These things happen in the context of an election celebration – all sorts of things are said – obviously I would have preferred had it not been said, it’s a distraction in some respects…it wasn’t a conscious thing, it was a throwaway comment in some respects at the end of what I felt, for me personally was a very emotional speech, talking to Sinn Féin supporters and I think most reasonable people will see that. I’ve dealt with it, I’ve said what I’ve said and I’ve moved on already. I’m focused on the future.”

He added: “I’m not sorry that I reflected back on the hunger strikes; obviously if I caused any offence, I didn’t intend to cause offence…that’s not who I am, I don’t set out to offend anybody. Some people will make more of this, the vast majority of people won’t; some people who don’t like Sinn Féin will make much more of this than it is. I can only give the context; I can only explain how it happened and I’ve moved on already.”

Regarding his ministerial ambitions in the event of Sinn Féin entering government, Deputy Cullinane said: “I’ve always said that that’s going to be a matter for Mary Lou. It’s very presumptuous because we don’t know whether Sinn Féin will be in government or not. I’ve made no secret about the fact that I obviously want to position myself to do the best for Waterford and also not just for Waterford and also not just for Waterford but for the South East and for the entire island so I’m very much focused on that.”

At the Count Centre on Sunday, the poll-topping TD told this newspaper that there had been no issue with his campaign’s use of cars mounted with loud speakers while votes were cast on Saturday last.

“We make no apologies for the fact that we had cars with loud speakers,” he said.

“They weren’t outside polling stations – they might have been passing polling stations – when you’re driving around that happens and that’s all part and parcel of election day. And we weren’t on our own by the way (when it came to loudspeakers): Matt Shanahan and Mary Butler had them too. And also we went further: we knocked on 5,000 doors and said to people it’s important you vote and we gave people mock ballot papers who were voting for Sinn Féin and we offered people lifts to get to polling stations.”

He continued: “We had a local election here (last summer) where people were giving out that the working class didn’t turn out to vote or that less than half the electorate didn’t vote. We went out there and we tried to mobilise them so I make no apologies to anybody for that. I toured all the polling stations yesterday, every one of them and not one Presiding Officer mentioned anything to me. If there were any complaints, then we would have dealt with them. I didn’t receive any, it’s a blip and it’s a non-story from my perspective.” 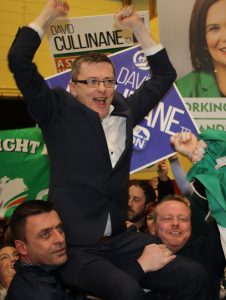