“I don’t think anybody would have seen this vote coming,” he told the Waterford News & Star, moments before he was hoisted shoulder high by his ecstatic supporters at the Waterford Count Centre.

“Certainly we didn’t; if we did we would have stood a second candidate. We knew before the campaign got underway that we were going to do well and we had a figure of 14,000 to 15,000 first preferences being very likely for us. But to get over 20,000 (votes) is obviously exceptional and is something that we didn’t foresee.”

Deputy Cullinane described his success as the “perfect storm of my own brand”. He explained: “I was quite strong in the city and county, the Sinn Féin brand was quite strong and when you have both of those things it’s a quite potent mix in any election. I also had the luxury of having some very high-profile TDs and other candidates who didn’t stand and that played its part as well. If you’re an incumbent and you’re in a strong position that helps so we had all of those things going in our favour. And I would say the hard work I’ve put in over the past four years has also played its part.”

The poll topper, who won 2,977 first preferences in his first general election in 2002, feels his political career has defied the odds.

Adamant that Sinn Féin will fight for its position in government, David Cullinane said: “We have to fight for our position in government the same way as everybody else does. They will try and exclude us but we have to be there fighting to get into government, not for the sake of it, not with any one particular party, not to prop them up but to be there, at the very minimum, equal partners in a government. And that might be with smaller parties on the left with a bigger party, it might be with smaller parties than Sinn Féin, we’ll have to wait and see the way the seats are filled – or it could be with one of the two bigger parties, who knows?

“It’s up to all of the parties and independents to sit around and see who can form a government – and it would be a very brave party to sit on the sidelines, to not talk to anybody and then go back to the electorate and say we couldn’t form a government. I don’t think that would wash…all options have to be explored because not exploring them and having this notion that we’re just going to go back to the people because we didn’t like the vote, I can’t see that washing.” 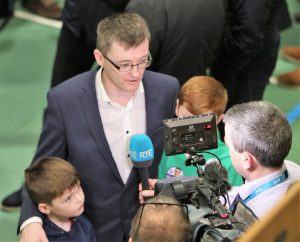 “THREE out of every five doors in John’s Park opened and told us they were going Sinn Féin,” said Fianna Fáil’s Seán Dower, who has spent a lifetime in the local and general election trenches.

“I’ve never seen anything like it. It’s an enormous achievement for David Cullinane and his team but even they didn’t see 20,000-plus votes coming. And since it’s almost certain he’ll have a running mate whenever the next election is called, we’re unlikely to see someone being returned with almost two quotas in Waterford again. It’s a remarkable result.”

Calling for a united approach from Waterford’s four TDs across key policy areas, Deputy Cullinane told the Waterford News & Star: “I had to work with John Halligan and I did so with a good heart. I had to work with Paudie Coffey and it was a pleasure to work with people of a like mind when it comes to Waterford issues and I would say that to whoever ends up in government or whoever’s in opposition, we have to stick together.”

He continued: “We only have four TDs, Cork has almost 20 and the West of Ireland has between treble and quadruple what we have in terms of Dáil representation so we have to make the most of what we have and build alliances with TDs in the region as well, and that requires both a generosity and an ability to do that, to look beyond party politics and to have a vision and a sense that you’re not here just for yourself or for your party at times. You’re also here for your city, your county and for the region, and I hope that (collegiality at Oireacthas level) continues.

“We’re still waiting for a lot of developments to happen but I don’t think the second cath lab (at UHW) would have ever come about had we not taken that approach. We had six meetings with the Minister for Health: on the first four occasions he said no, the fifth time was a maybe and the sixth time was a yes. It’s the same with the North Quays, moving the train station and the same applied to the Garda Headquarters and the prospect of it moving to Kilkenny. All of the good work put into those issues was the end product of people working together, and Waterford benefited from that. We just haven’t benefited enough and I would argue that the (outgoing) government just didn’t do enough for Waterford.” 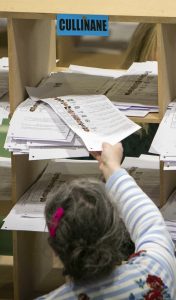