FINE GAEL made the sort of political history few had foreseen in the build-up to last Saturday’s General Election in failing to return a Waterford TD.

For the first time in general election history since its formation in 1933 – when Cumann na nGaedheal, the Centre Party and the National Guard (commonly referred to as the Blueshirts) merged – Fine Gael has no Dáil presence in Waterford.

However, it’s worth noting that FG had no Waterford TD between late 1966 and the 1969 general election after Fianna Fáil’s Fad Browne won a by-election triggered by the death of Deputy Thaddeus Lynch.

The extent of the collapse in Fine Gael’s vote clearly took the party faithful by surprise in an election which didn’t feature a Deasy on the ballot for the first time since the 1965 general election.

Only weeks ago, there was talk that on a good day, Fine Gael might be in with a sniff of winning a second Dáil seat but ultimately the John Cummins/Damien Geoghegan ticket fell short both individually and collectively.

One suspects the disappointment will be more acutely felt by Cllr Geoghegan than by Cllr Cummins given that he was one of only two West Waterford candidates in the field. However, there’s little doubt that the presence of Matt Shanahan on the ballot ultimately put pay to any prospect of Fine Gael retaining the seat vacated by the retiring John Deasy.

When asked how he felt Senator Paudie Coffey would have fared had he chosen to remain on the ticket, former Seanad Leader Maurice Cummins declared: “I’d say, even under the circumstances at the moment, he probably would have polled between 6,000 and 7,000 votes; I see no reason why he wouldn’t have got at least 6,000.”

Cllr Cummins, who placed fifth in the final standings, ought to draw consolation from his first time showing at general election level, falling just 66 votes off Paudie Coffey’s debut run back in 2007 and bettering Jim D’Arcy’s tally in the same poll by over 3,000 first preferences.

The days of the traditional Redmond seat in Waterford, which dates back into the late 19th Century via John Redmond’s political career in Westminster, were brought to a shuddering halt by the Sinn Féin tsunami last weekend.

A party which had three general election candidates in Waterford up until mid-December, may now have to decide to back just one candidate – presumably Cllr Cummins – come the next election, whenever that may be. 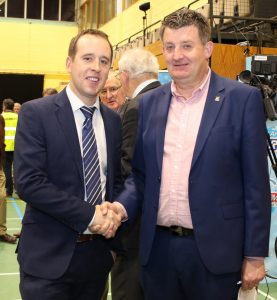