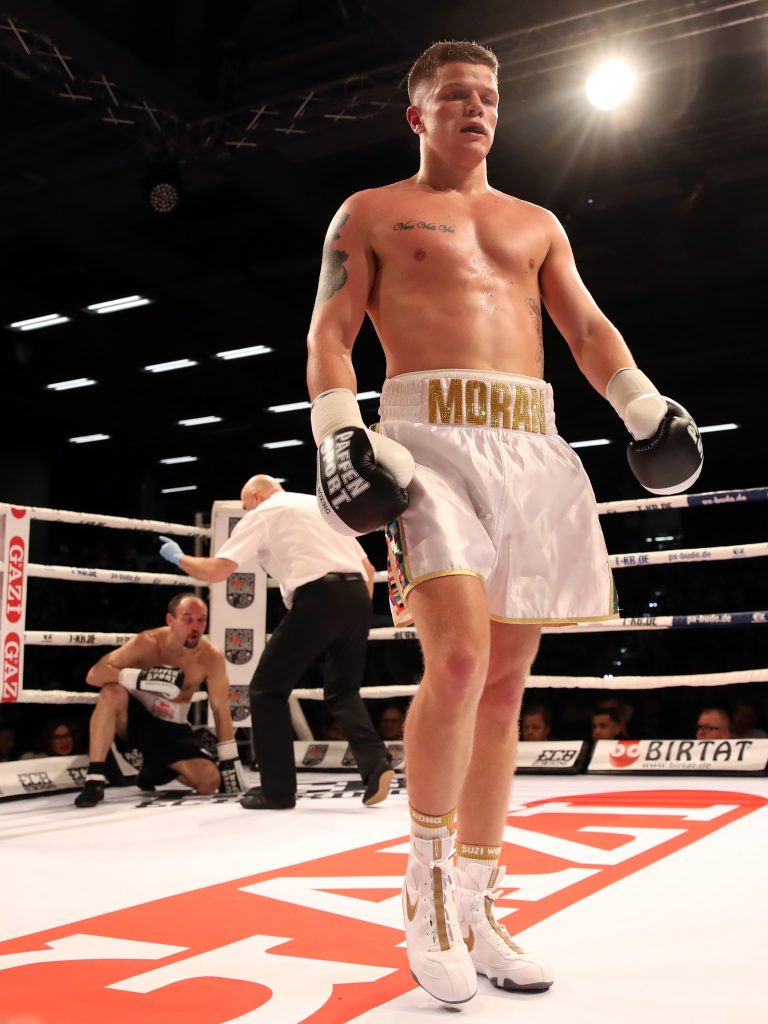 Waterford’s Dylan Moran about to celebrate his second round knockout over Ferenc Hafnernow in Stutggart on Saturday night. Photo: Getty.

Waterford welterweight, Dylan Moran’s professional boxing career took a distinct turn for the better in Stuttgart on Saturday night.
His second-round knockout over experienced Hungarian Ferenc Hafnernow set himself up for an IBF rankings belt showdown.
The Kilmacthomas man is now located and training in Lichtenstein boxed with purpose and dropped the Hungarian in the second round before securing the stoppage.

BOUNCED BACK
After a tough 2019, the PGP Boxing promoted and Conor Slater managed fighter has picked up 3 wins in just under three months. He injected more momentum into his career as Saturday’s win secured a shot at the IBF Inter-Continental Title on 4th April.
Moran’s April 4 opponent Deniz Ilbay has held many titles including IBF, WBO Youth and some non widely recognised world titles.
The German’s two losses come to recent Terence Crawford opponent Egidijus Kavaliauskas and less impressively Jonathan Jose Eniz where he was defeated on a split decision.
The German provides a stiff test for Moran who looks to claim his first title in the paid ranks and possibly boost himself into a top 15 spot in the Welterweight rankings.

EYES ON A BELT
Speaking on the win on Saturday night Moran took to Instagram to address his fans stating “Second round knockout, strictly business, now I’m coming for that belt”
Getting back on the horse wasn’t easy for Moran as he admitted in a previous interview with Irish-Boxing.Com he was thinking of walking away from the sport after his knockout loss on his American debut and the frustration of two fights being canceled including one in Mexico canceled minutes before ‘The Real Deal’ was set to make his ring-walk, but back on track now the IBF belt would be the perfect first belt to really kick-off his career.
“It’s happened now and I have had to deal with it. I said to myself I can be better or worse off after this and that’s totally in my control. I’m going to make sure I’m better from this experience,” he said previously.
“Throwing myself on the chair, feeling sorry myself and wondering why me? That’s the easy option and that’s not me. Before you know it a few weeks have gone by and your overweight and depressed.”
“Accept life isn’t fair and it becomes that bit easier. I honestly believe this experience is setting me up and preparing me for bigger and better things.”
“Win lose or draw from day one I just believe I’m going to have a great career in boxing,” he adds before, in typical Moran fashion, he reveals he has to bounce back for others as much as himself.
“It wasn’t supposed to happen but it did. As much as I need to do it for myself there’s also a lot of people watching to see how Dylan Moran comes back from this. I’ll make sure and set a good example.”
And set a good example he has, the story of Moran so far shows just how up and down the sport of boxing can be in just a year. Check out Irish-boxing.com for more.