Phased plan for future developments at Port of Waterford

WHILE there is no ‘immediate necessity for expansion of capacity in the short or medium term’ at the Port of Waterford, a phased development plan using three different scenarios has been devised by management at Belview.

As detailed in the Port’s 2020-2044 Masterplan, a low growth scenario envisages the existing container and bulk berth infrastructure “sufficing until 2037 when an additional 200 metres of bulk quay is needed. There is no requirement for expansion of the container terminal under this scenario”.

Medium term growth at the Port will require an additional 200m of bulk quay by 2029 (with works beginning in 2024), with a further 200m to be added by 2041, while no container terminal investment would be required via this forecast. Investment decisions regarding such extensions “must be made five years in advance,” according to the report.

But should high growth be achieved at Belview, a container investment (in addition to the bulk quay envisaged in the medium growth scenario) would be required. A “trigger point”, according to the Port Masterplan, “must be identified to allow a suitable time for the design, permitting, construction and commissioning of the works to be carried out”.

Concept design for a new river training wall (which would reduce sedimentation in the existing port operational areas) is already being prepared. “Following this concept design phase a period of around 6-9 months is required for preparation of the planning application and completion of the Environmental Impact Assessment and Appropriate Assessment, followed by 18-24 months for planning approval and obtaining the Foreshore Lease and Licence.”

The programme for proposed dredging works to improve marine access is already underway, with surveys and site investigations undertaken to “determine river bed and rock levels to establish any design issues and overall viability”.

Design, environmental studies and approvals will take “around 22 to 24 months” to complete while three dredging campaigns in the following 36 months are envisaged thereafter, taking the contract award, “contractors’ mobilisation” and execution of all works into account.

Financing of all future projects at Belview has also been considered taking the low, medium and high growth scenarios into account.

“Capital spend of €80m is envisaged being €30m on Masterplan projects and a further €50m on new plant and other re-investment required to maintain and develop the business…Turnover is projected to grow to €11.8m and Profit after Tax to €3.8m.”

High growth levels at the Port would require a €125m capital spend (with €57m on Masterplan-identified projects along with €68m on new plant projects and other investments) with turnover projected to grow to €33.4m and Profit after Tax foreseen to reach €9.9m.

“Furthermore the forecasts assume steady rates of change, clear sight of the future trading picture and capital investment when it is needed and can be supported by enhanced activity,” according to the Port’s Masterplan.

“The real world doesn’t always work like that and there is potential for tough financial challenges and a real need for grant aid and other funding supports from Europe under Ten-T and/or Motorways of the Sea to reduce the risk profile of the investments and to help ensure that they are delivered when needed. Grant aid has not been yet taken into the projections and it is assumed that the National Exchequer will not be in a position to provide financial supports due to State Aid and other restrictions.” 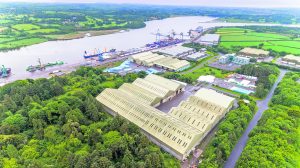 The Port of Waterford forms part of a wider industrial zone which supports almost 1,000 jobs. 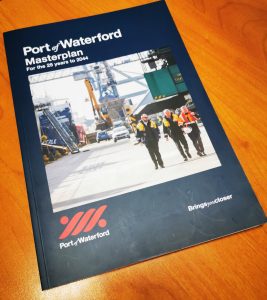 The Port of Waterford’s 25 year Masterplan is one of the most comprehensive strategic reports of its kind ever produced in the South East.