Power happy to give the Blues another shot 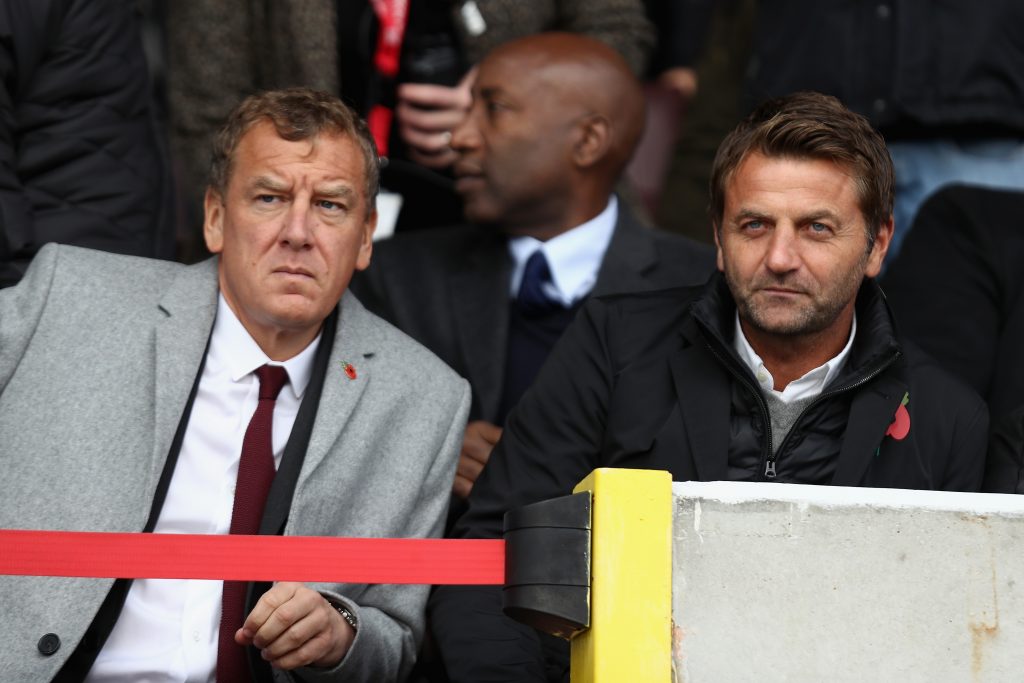 Waterford FC owner, Lee Power, spoke this week about missing out on Euorpe, his support for John Delaney and his pleas to Waterford soccer fans. Here is at a Swindon Town game with Tim Sherwood. Photo: Getty.

Still hurt after losing out on a European spot last season, Waterford FC Lee Power is urging the people of the city and county to get behind the club ahead of the start of the 2020 SSE Airtricity Premier Division season that gets underway with an away game against St. Patrick’s Athletic on Friday night.
The former Republic of Ireland Under 21 International gave an in-depth interview with the42.ie journalist Paul Fennessy this week where he admitted that he doesn’t change his supporting view of John Delaney at the time when the ex-CEO was under fire after €100,000 bridging loan he gave to the FAI.
After finishing fourth in the league in their first season back in the top division in 2018, the Blues were due to play in the Europa League, but were denied that opportunity by UEFA, who cited that the club weren’t in existence for a three-year period following Power’s rebranding of the club two years previous.
The Swindon Town owner considered pulling the plug at the end of the season but has decided to give it another shot for 2020. “There was a lot of talk that I was going to pull out this year because of losing out on Europe,” admitted Power.
“I did give it some thought. But there are changes being made and different things being spoken about and I’ve decided to roll the dice again. My hope is that the people in the city and the county of Waterford come and support the team.
“I’ve just spent well millions now actually in getting it to where it is. The disappointing bit last season were the attendances towards the end — it’s down to the city if they want to support the team. I’ve done my bit and the manager Alan Reynolds has done his bit.
“If you support a team, you need to support it through thick and thin. I think everyone was so let down by the UEFA decision that it caused a real dampener at the club. I’m hoping that was the reason and everyone’s geared to come back out this season. Fundamentally, if they don’t, there’s only one thing that happens to a football club.
“I don’t think we should have to try entice the supporters back here. I’m a football supporter. I’m a Millwall supporter. As long as I’ve got breath in me, whenever I get a chance, that’s my roots, that’s my team, I’ll go and watch it so I would urge the Waterford people to do the same.”

NO REGRETS
Asked had he any regrets about his support to John Delaney, Power said, “Not at all. I stand by it now. John was the reason I came at the time. He said: ‘Look Lee, this football club’s in trouble. Would you come and help us save the club?’
“What I said in my statement is John’s done nothing but benefit Irish football, from my point of view. That club might have gone out of existence. It was John that came in and asked me to do that and that’s what I have done. During my couple of years there, John has been nothing but helpful in helping us keep a League of Ireland team in business.
“Like I said before to people, which they don’t put in the statement, is that I’m not aware what John was doing on and off the pitch, what the finances were at the FAI, what had happened in the 10 years previous — obviously, I’m not privy to that. I was only talking about my own personal relationship through that two-year period.”

NEED FOR CHANGE
The Blues owner is confident that there will be changes to the League of Ireland. “I think that’s what the clubs are exploring now — a breakaway to try to be in charge of their own dynasty and commercially, any money due in from sponsors goes into the league’s pockets, not the national associations.
“It’s maybe having a different entity like they do in the UK and most other countries and seeing if that works better. I think it’s got to happen. There are no two ways about it, for the future of Irish football, otherwise it’s never going to go anywhere.
“I just hope that with this new shake-up in the FAI and the talk of possibly removing ourselves from the association and setting up our own league, it’s probably one of the key reasons that I’ve decided again to have another go this, because you can’t run a league like that.
“I think all the owners talk the same language as what I’m speaking — something needs to change. They can’t expect individuals to spend hundreds of thousands of pounds to support the local football team without any reward.”