Speaking to the Waterford News & Star, Colin Power stated: “Mary Butler has put out a press release – well, to be fair to her, her PR office and the Fianna Fáil spin doctors have done that – and in my opinion they’re manipulating the situation now when it comes to this Facebook account.”

The account in question, according to a statement released by Fianna Fáil yesterday, was a fake ‘Mary Butler TD Facebook page’ which was “created and used to ‘like’ and ‘laugh’ at certain comments on other, legitimate (Facebook) pages. The intention and effect of this activity was to create the impression that I was dismissive of victims of child sexual abuse.”

The controversy erupted online after the alleged fake page featured a ‘laugh’ emoji beneath a post issued by Jason Clancy, another of Kenneally’s victims, dated Thursday, February 6.

In the post, Mr Clancy said that he and his fellow victims were “so upset that one of the victims of Bill Kenneally (Barry Murphy) had been canvassed by Brendan Kenneally (Cousin of Bill Kenneally)…on behalf of Fiana (sic) Fail Candidate Mary Butler.”

According to Deputy Butler’s statement: “Shortly after I was made aware of the fake Facebook profile, the account disappeared. However, those behind this smear operation had taken screenshots of the fake activity and in a sophisticated and highly co-ordinated effort, distributed the images through social media throughout Waterford and around the country.”

The Portlaw-based TD said she has been “subjected to a sustained and co-ordinated campaign of online hate and harassment”, something which had intensified since her re-election in the early hours of Monday morning.

She added: “I have reported this attack to An Garda Síochána and hope to meet with specialist officers later today (Tuesday, February 11). I have also suspended my Facebook account. The effect of this attack has been devastating for me personally and for my family. My commitment to and support for victims of sexual abuse has been complete and unwavering.”

‘Not casting any aspersions’

Colin Power stressed that he didn’t wish to “cast any aspersions” about who was responsible for the account (“it’s an alleged fake account at the minute”) but added: “This is going to go a lot further, I can tell you that.”

Some of those who had alerted Bill Kenneally’s victims to the account were people Colin Power doesn’t know well, adding: “I’d know them to say hello to and I know them to have a quick chat with, but these are reasonable people.”

Regarding the alleged fake page, Mr Power said: “Mary Butler has said that this had made her look dismissive to the victims but since 2016, we are of the view that she has been dismissive of us. During the 2016 general election campaign, a couple of months after (Bill) Kenneally had been sent to jail, Brendan Kenneally was canvassing on Mary Butler’s behalf. Now we went to her at the time and we expressed our shock, disgust and upset about this. Now none of us at the time suggested that Brendan Kenneally did anything illegal. We’ve never suggested that. But what we said quite clearly wasn’t that this wasn’t an ordinary canvasser as such. In 2002, at the time he was told (about the abuse claims as then they were) he was a TD and shortly after that he was put into the Seanad by none other than Bertie Ahern and then five years later he was re-elected so he was a TD, a legislator, a man of serious power, and he’d been told than children had been sexually abused. And it’s not that he didn’t go to anyone about it, he went to Monsignor (John) Shine who happened to be another relation. Now, Mary Butler was aware of our views and our upset four years ago yet she went and did the same thing four years later. That’s hard to credit.”

Barry Murphy said he was “gobsmacked” that the Fianna Fáil canvass which called to his home on Thursday last included Brendan Kenneally.

“My wife Linda rang me about four o’clock and told me she’d just had canvassers for Mary Butler at the door. she said: ‘You’re not going to believe who one of them was’. So I thought maybe it was Micheál Martin or someone out and about on a big push, but Linda said to me: ‘No, Brendan Kenneally’. I just said ‘what?’ I was genuinely gobsmacked. She was taking all the schoolbags out of the boot of car at the time and he walked in the gate and went to hand her election material. She just looked at him and said: ‘Fianna Fáil? I don’t think so.’”

Mr Murphy told this newspaper: “So she then rang me, hung up the phone and went back out and the (FF) canvassers were still out on the street and she said: ‘I just want to say this: you people should really know whose doors you’re knocking on. My husband is one of Bill Kenneally’s victims’. And she said the colour drained from his (Brendan Kenneally’s) face. To be fair, Paul Cunningham, who was on the canvass, said to Linda that it took some courage for her to come out and say that but he was the only one (on the canvass) who said anything. It was very dignified; there was no shouting or roaring involved. She just felt she had to go out and say something.”

Victim: ‘I genuinely couldn’t believe it’

Barry Murphy continued: “I genuinely couldn’t believe it when Linda told me. Brendan Kenneally’s name didn’t even enter my head because I didn’t honestly believe that somebody would be foolish and insensitive enough to do that. But it appears to me, from Fianna Fáil’s perspective that it’s business as usual and that we don’t matter. Surely somebody in Fianna Fáil Headquarters knows who is out representing them in Waterford, and on every other street in the country. If someone was out on the street representing my company, I’d want to know who they were and what their background was.”

Regarding Fianna Fáil’s level of support since their meeting with Micheál Martin and Jim O’Callaghan in Leinster House, Barry Murphy said: “None. We’ve had none. I might have a different outlook from the other lads when it comes to this; maybe it’s a case of me not expecting anything else given that we’re dealing with a political party that appears to be living on a different planet to the rest of us. And the thing is, I’m not political, I’m not involved in any political party and I’ve no interest in shafting anyone. If I felt the best candidate that could work for Waterford was from Fianna Fáil, Sinn Féin or the Monster Raving Loony Party, I’d vote for them. As far as I can see, they’ve (FF) done nothing. And I have to take my hat off to (Justice Minister) Charlie Flanagan, who has been very much on our side, with pressure applied from Sinn Féin as well when it’s come to our case and the Commission (of Investigation). But we didn’t care who we spoke to about this as long as we got action and got the answers we want and we need, which we haven’t got yet. Micheál Martin and Jim O’Callaghan spoke a good game at the time but when we left that meeting, that was it, really, in terms of Fianna Fáil. There’s been no help for us from them since.”

Both Colin Power and Barry Murphy stressed their ongoing willingness to talk “to anyone who can help them.

Said Mr Power: “I’d be very happy to do that and have offered to go on WLR with Mary Butler to discuss the issue and I think anyone who knows me knows I wouldn’t be going on shouting and roaring at her. She would know that as well, that any conversation we’d have, wherever we’d have it for that matter, would be dignified.”

Barry Murphy stated: “It’s never too late for anyone to admit to making a mistake, and I can’t say this more strongly, none of this is political. For Mary Butler to apologise to me or, more importantly, to my wife for what happened last Thursday, for me, that would be common decency.”

Speaking to The Irish Times at the Waterford Count Centre in relation to the February 6 canvass, Deputy Butler stated: “All I can do is apologise. I would never intentionally try to cause any upset or distress to Barry and his wife Linda. All I can do is to keep apologising for it…I’m very slow to make any comments at the moment because there is a live inquiry ongoing and I hope the Judge can close it sooner rather than later so that these men and their families can get some kind of closure. They’ve been to hell and back and I’d hate to think I was any part of making it any worse last week.”

When asked for further comment in relation to her press statement as well as what Jason Clancy had raised in his own Facebook post last week, Deputy Butler said the matter was “now in the hands of the Gardaí”. 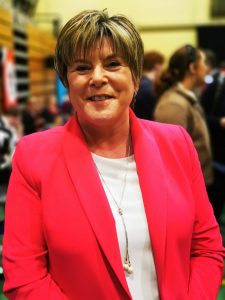 Fianna Fail TD Mary Butler, who yesterday spoke of “a sustained and co-ordinated campaign of online hate and harassment” against her.