‘MEMORIES, The Songbook Legacy’ is a two-disc album which the Hayes family has assembled in honour of their late father and popular entertainer Dick Hayes, who died following a short illness on December 27 last.

Speaking to the Waterford News & Star, Dick’s son Richie said the 28 track album (priced €20) spans the entirety of his late father’s career. “We were lucky in the sense that we had so many recordings of Dad,” said Richie, speaking from his Florida home.

“He was out with us last September and we even recorded some material then, which in hindsight is something we’re all particularly grateful for now. Over the past few weeks, I’ve been listening back to so many original recordings going back to the 60s and 70s and remastering them, with David adding orchestration where we felt it worked best, it’s been a welcome distraction since Dad passed away. Having him in my ear has been a comfort and putting this album together has been like putting together our own special memory card.”

Richie continued: “We’ve been able to dip into a lot of live recordings of Dad’s too, singing in the Kickham Inn in Carrick-on-Suir, the Majestic in Tramore and all those Thursday nights in the institution that is Alfie’s. Dad’s back catalogue is like a memory card in its own right from my point of view so having invested a lot of time and a lot of love into this album, I have to say I’m really happy with the end product – and I think Dad would be too.”

Speaking on behalf of the Hayes family, Richie stated: “We were overwhelmed with the numbers that turned out for Dad’s funeral. It’s still hard to take in how many people came to sympathise and offer their kindness to us. We lost count of how many people said to us what an enjoyable part of their lives Dick was, and the joy he brought to them through his performances, so assembling an album like this felt like the right thing to do with so many lovely tributes ringing in our ears.”

Featuring many of his time-honoured numbers, from ‘This Is The Moment’ to ‘My City of Music’, to ‘Noreen Bán’, ‘The Croppy Boy’ and ‘Danny Boy’, fans of Dick Hayes will revel in the tones of one of this city’s most beloved singers.

“Dad meant so much to us and we know how much he meant to so many others,” said Richie. “We hope this album is something which people will enjoy for years to come. It’s the least we could do for Dad.”

Memories, The Songbook Legacy is available at Rainbow Records, Alfie’s and on iTunes 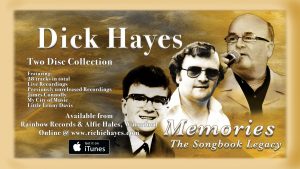 ‘Memories, The Songbook Legacy’ is a new two-disc album in memory of the sadly missed Dick Hayes.