MAEVE Doherty has assembled a pile of photographs and cuttings on her sitting room table in Williamstown as I attempt to compact her life into a 45-minute conversation.

“I’m about three or four in this photograph with Jackie Kennedy,” says Maeve, holding a black and white snap taken in the famous Irish-American homestead.

Maeve continued: “The Kennedys were staying in Woodstown. Jackie brought Caroline and John Jnr with her and they came to Dunganstown twice during that visit and one of those days, I was brought up to play with John. There was a cat after having kittens (at the homestead) and I remember John and Caroline wanted to bring them back home with them. That was all they wanted that day but of course quarantine wouldn’t have allowed that to happen! I was only four at the time but I vividly remember Jackie’s fishnet tights – they were something I hadn’t seen in Dunganstown or anywhere else when you were brought up in the country.”

A native of Campile, County Wexford, the oldest of six and daughter of Mick Rowe and Anna Kennedy (herself a Dunganstown native), Maeve grew up on a mixed farm of dairy, crops and some beef.

“There was always some sort of a pony or horse at home when we were young, for fun purposes and not just for work and horses were a passion of mine up until I got married to Bill (Doherty, Deputy Principal of Mount Sion Secondary School) because I brought a nice hunter with me to Glenmore  – it was like the dowry coming with me when I got married!”

Being the eldest came with many responsibilities, but not in a bad way, as Maeve put it. “Home was an average-sized farm with 40 cows; we weren’t wealthy but money was never an issue at the same time, it was never mentioned when I was growing up. There were a couple of men who came in and did a bit of work now and again when he needed it when we were young – drainage, moving a ditch, fixing fencing and so on. But as we got a little older, the six of us became a bit of help. I milked the cows happily a few times, I gathered hay and straw, making bricks of it in the shed and I loved it. But none of it was ever a burden or a chore because Dad didn’t over-work us. Helping out was never a major issue; our homework and our own interests were a priority as well. Being the eldest had a few drawbacks – getting to dances where The Indians and Joe Dolan played was my goal but I wasn’t let very easily!”

Maeve attended St Louis Convent in Ramsgrange as a day student and in her third year, the school amalgamated with the Vocational School in Shielbaggan, which led to the construction of a new community school. “Teething problems” in the new school’s first year led to Maeve and many of her classmates moving to the Mercy School in New Ross. While art was something she was always interested in, Maeve told me, “it would never have been considered a serious career and something you could make a living out of and the nuns certainly never encouraged it! I’d cared for my grandmother at home, something which never bothered me so I opted for nursing (qualifying in 1985) and I ended up in Ardkeen, because it was the closest to home. I had a few happy years there and I really enjoyed it.”

In 1981 Maeve met Bill (who had just begun working at Mount Sion) in Ardkeen and they married in 1987, eventually having three children, Eimear (30, working in London’s Drawing School), Ciaran (29, a Business Intelligence graduate currently in Melbourne) and Colm (25, a Dungarvan-based vet).

After seven years in nursing and having had Eimear and Ciaran 13 months apart (“Irish twins!”), Maeve turned her attention to both her children and to art.

“I put them into a creche one day a week at the Adult Education Centre in Ozanam Street and for three years I went there, doing a watercolour class with Ciaran Lynch. Looking back, I was always sketching and drawing as a child and subject choices meant I never got into an art room in school – and I know I’d have loved it…but I eventually got around to giving art more of my time and I exhibited for the first time at the Kilkenny Arts Festival in 1991 or 92, at the old tax office on the Parade and I sold practically everything I put up, which was a big surprise to me. I must have been doing something right and it gave me the confidence to keep doing it.”

In the interim, Maeve has exhibited throughout the region, primarily in watercolour (“with a little bit of oil thrown in”) and some of her work now hangs in Áras an Uachtaráin, Trinity College Dublin and the USS John F Kennedy Aircraft Carrier!

And things came full circle when Maeve was commissioned by Wexford County Council to paint a stunning representation of the new Rose Fitzgerald Kennedy Bridge which was presented to Rose Katherine Kennedy Townsend, granddaughter of Bobby and Ethel Kennedy.

“I didn’t get much time to do it – I got a call two weeks before Christmas – but it helped that I knew the Pink Rock side so well and of course I was born on the other side of the Barrow. I turned it around in two to three weeks and I’m happy with how it stands up. It sat well.”

If choices are, as Edwin Markham put it, “the hinges of destiny”, it would appear that Maeve Doherty has got it right when it’s come to the living of her life and the worth she’s injected into it. And there’s much art to be made yet.http:/ 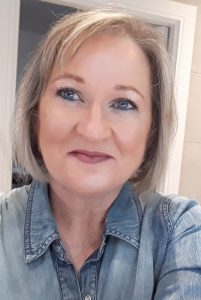 Williamstown resident Maeve Doherty made art her full-time passion back in 1990, having previously trained and worked as a nurse. 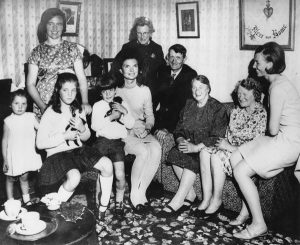 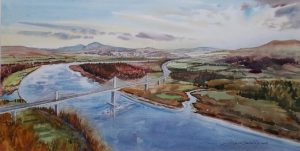 Maeve was commissioned by Wexford County Council to create a watercolour painting of the new Rose Fitzgerald Kennedy Bridge, which was presented to Rose Kennedy Townsend, granddaughter of Robert F Kennedy at the recent opening of the new N25 Bypass bridge.