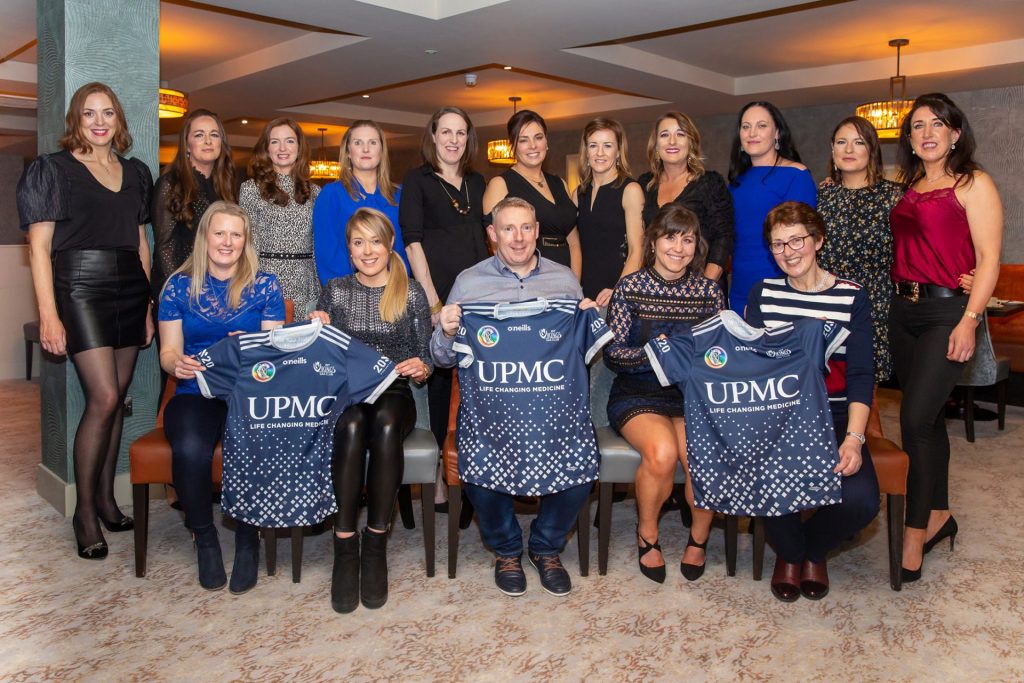 Former players and WIT staff pictured at the Tower Hotel on Saturday night where they celebrated 20 years since their first Ashbourne Cup title. Photo Maurice Hennebry.

The camogie season of 1999/2000 was, one has to say, a year of unprecedented success for WIT, as not only did we raise the Ashbourne Cup for the first time but also added the Division 1 League title. Our Ashbourne campaign started against an Athlone IT side which had high hopes of success.
Played at the Ragg GAA grounds in Thurles Waterford started excellently and had an early lead built up before Athlone got into their stride, but try as they might they could not penetrate a Waterford defence which was excellent throughout and for the entire hour did not yield for an Athlone score. The end result saw Waterford run out easy winners on a score line which read 5-9 to 0-0. This result put WIT into a semifinal on the Ashbourne weekend against UCG which proved to be a much tougher affair. Indeed this match played in the host college UL really tested the character of Waterford as we found ourselves a goal down in the early minutes. This together with ground conditions that were far from ideal meant that an uncompromising affair was the order of the day.
However, again Waterford stood firm and some excellent scoring from the forward division meant that we held out for a morale boosting victory. The prize , a place in the Ashbourne Cup final and a chance to settle a score with the previous year’s winners UCC. And what a final it turned out to be! Driven by the taste of a bitter defeat felt in the previous year when WIT had hosted the Ashbourne for the first time, WIT now were the more focused and determined team and UCC had no answer to the relentless pressure applied on them in every section of the field. The result of this was that WIT captured the Ashbourne Cup for the first time in its eighty three years of existence, on a score line which read WIT 1-6, UCC 0-4.
Our win will command an extra special place in the annals of the championship in more ways than one as not only was it the first time that Waterford had won the prestigious competition, but it was the first time that a non – university team captured the cup. It was also the last time that the Ashbourne Cup will be competed for as it is to be “retired”, to the GAA museum in Croke Park and from next year the Colleges and Universities will compete for the Millennium Cup. However, the story did not stop there as three weeks later we lined out in a league final against the Northern representatives, UUJ up in Trinity’s grounds in Santry, where once again we were victorious, putting the finishing touches to a unique year. Indeed it was year in which we fulfilled the promise we have shown in the past number of years, but this could not have been achieved without the dedication and patience shown to us by a management team of Colm Bonnar and Sheila O’ Donohoe, two people who have done immeasurable work for camogie within this college. To them and not least to the girls who gave it their all in the pursuit of glory – PARTY ON!!!!!!
The team that created history had representatives from seven different counties and all have inter- county experience. Just for the record they were: Michelle Fennelly (Kilkenny), Kelly Long (Kilkenny), Ashling Byrne (Kilkenny), Mary-Ellen Butler (Kilkenny), Ciara Scallan (Wexford), Sinead Nealon (Tipperary), Ursula Walton (Kilkenny), Una O’Rourke (Tipperary), Tina Bergin (Wexford), Angela Sheehy (Limerick), Bridget Mullally (Kilkenny), Jackie O’Connor (Tipperary), Kate Kelly (Wexford), Mary Walsh (Wexford), Esme Murphy (Wexford) Subs: Aoife Drohan (Waterford), Paula Phelan (Kilkenny), Jenny Power (Wexford), Eidin Cleary (Dublin), Marie Butler (Wexford), Ciara Moran (Roscommon), Brid Davern (Limerick), Catherina Fitzgerald (Tipperary), Kathleen Atkins (Kilkenny).