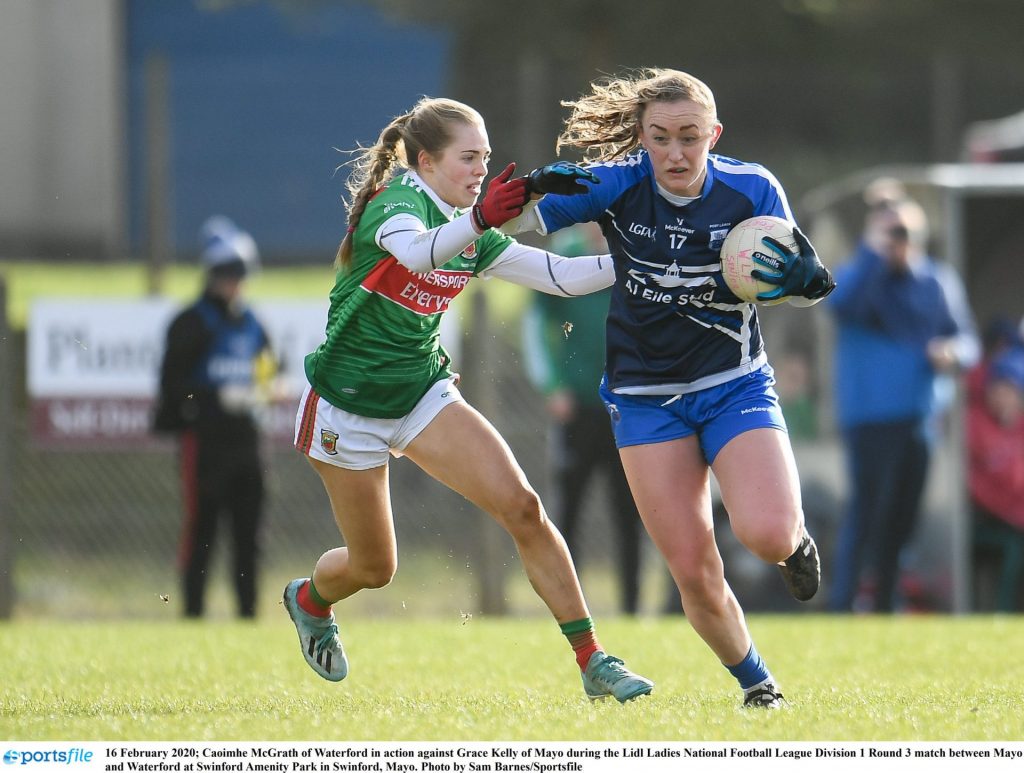 The facilities and underfoot conditions in Swinford were second to none, but the wicked wind, biting cold and watery sunshine made it very difficult for the players as Mayo battled their way to a crucial Lidl National Football League win over their visitors from the South East.
Waterford played with the aid of the gale in the opening half, but failed to make it count on the scoreboard as Mayo dominated possession. The home side produced some spectacular passing movements to carry the ball into the wind and were rewarded with parity at the break, 0-2 apiece.
Mayo’s points came from the irrepressible Rachel Kearns as Maria Reilly, Ciara Whye, Noirin Moran and Allannah Duffy epitomised the spirit of the green and red.
Caoimhe McGrath, Aileen Wall and Chloe Fennell were prominent for the Munster women, but Mayo were perfectly positioned at the interval, despite points from Fennell and McGrath.
Waterford were much improved after the resumption but found it impossible to work the ball forward against a ravenous home back division where Danielle Caldwell and Kathryn Sullivan were excellent. In the end Waterford couldn’t add to their first-half tally and the home side gradually pulled away and made the most of the conditions.
Sinead Cafferky gave Mayo a slender advantage early in the second half, and two points from Kearns left three between them, 0-5 to 0-2, before the heavens opened and referee Siohhan Coyle, rightly took the players off the pitch in the middle of the hail storm.
Once play resumed, Natasha Gaughan put Mayo four points clear and despite the best efforts of a gallant and game Waterford outfit, there would be no change to the scoreboard as Peter Leahy’s charges secured a crucial win.
The victory sees Mayo clim to joint second in the Lidl NFL Division 1 standings, level on points with neighbours Galway, and three back from leaders Cork, who Mayo travel to face next weekend.