Heartbreak on the double for WIT Vikings 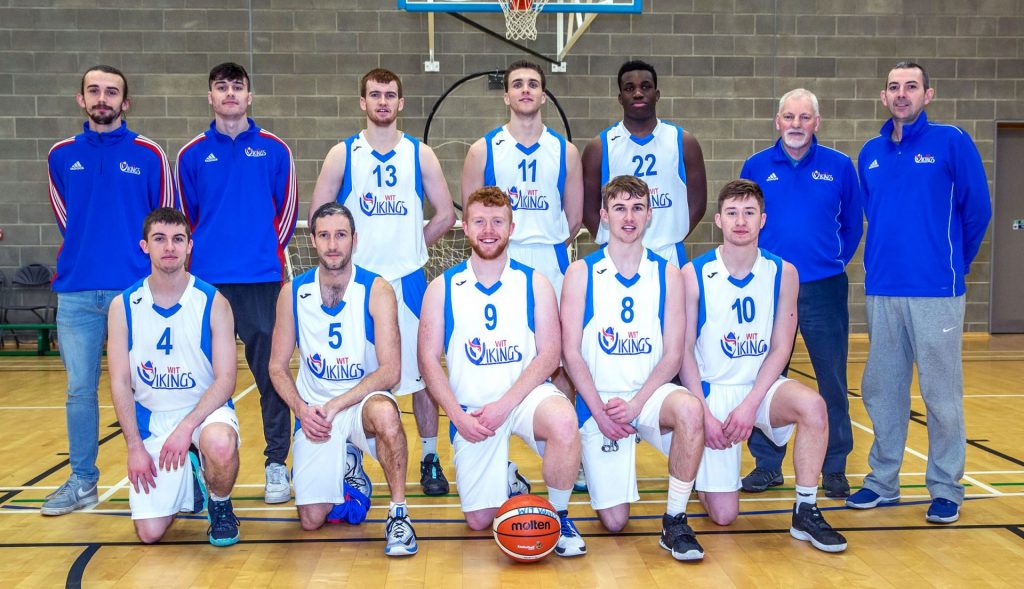 The WIT Vikings who played Limerick Celtics in the National Men’s League Division One at the Carrickphierish Sports Hall on Sunday. Photos: Maurice Hennebry.

While the results did not go the way of WIT Vikings in their two games last weekend there were a lot of good things to take from their two performances. Saturday night was the most disappointing for WIT Vikings as they lost out in an overtime thriller with Fr Mathews Cork in Carrickpherish Sports Hall by a single basket.
Having being behind for most of the game a fantastic defensive display in the final quarter allowed WIT Vikings take the lead in the game for the first time with three minutes remaining. A basket from Pepper and a converted free throw from Grassey put the home side three in front with 14 seconds left but an outrageous three pointer from US player Pugh with two seconds on the clock tied the game and it went to five minutes overtime.
There was little between the teams in the first period a three from Pugh opening the scoring for the Cork team followed from one by Jay Kavanagh for Vikings to level it. O’Neill then hit a pair for Vikings answered by O’Mahony for Mathews, Osihiogwemoh came off the bench and with a pair of baskets close in, they brought the home side level but again O’Mahony had the final say with a basket to put Fr. Mathews 23 to 21 in front at the end of the first.
The second period went much the same as the first, Sheehan, O’Neill and Osigiogwemoh combining well for Vikings while US player Pugh and Cahill were doing the business for the Cork side. Again, it was Fr. Mathews that shaded the period giving them a four-point lead at the half 44 points to 40.
Both defences stepped up their effort in the third quarter and made scorers difficult to come by. Vikings Grassey having being held well throughout the first half started to find his range a little and the period ended 13 apiece Vikings still trailing by four.
If the Vikings defence was good in the third period it went to another level in the fourth and for all but two seconds from the end held Fr. Mathews to just seven points. By that time Sheehan had made a couple of baskets, Pepper made a three and a two and Vikings were three up with 14 seconds to play. Mathews worked the ball to Pugh and the big American hit an outrageous three pointer to tie the game with just two seconds left, Vikings had a half chance after a time-out but is was not to be and it was into overtime.
The overtime went much the way of the game. Mathews hit first and Vikings responded. Nothing in it as the clock ticked down, Grassey made a pair of free throws and a basket to put Vikings one up. Again, it was a three pointer this time from Mathews player coach Bucan that put his team two up. Grassey for Vikings got a good look to tie the game and send it to a second period of overtime but it was not to be and Mathews took the points.

WIT Vikings 80
Limerick Celtics 98
Having gone through the disappointment of losing out in an overtime game on the Saturday night WIT Vikings had little time to recover as it was back to Carrickpherish on Sunday for a 3pm tip-off against Limerick Celtics. While Vikings had come through a very tough encounter the previous night Celtics had an easy win at home over Portlaoise Panthers.
Vikings edged the first period 18 points to 15 with two big threes from Grassey the pick of the scorers. Celtics had the game level by half time at 38 points each with Vikings finding it next to impossible to hold one of the league’s top scorers American Kevin Oberweiser in check.
There was nothing between the teams as the second half got under way but after five minutes the efforts of the night before started to show on the Viking players. Lapses on the defensive end and missed opportunities on the other and the Limerick team got control of the game. Oberweiser in particular hit a number of outrageous three pointers to give Celtics had a seven-point lead going into the final quarter.
Vikings made a big effort to get back into the game but it was a step too far, each time they seamed to be making inroads, Oberweiser in particular hit back, by the end of the game the American had 51 of the Celtics total to his name.
This coming Saturday WIT Vikings are home again when they take on local rivals IT Carlow in the WIT Arena, tip-off 7PM.